Researchers within the Agricultural Research Service's (ARS) Systematic Entomology Laboratory (SEL) are currently preparing for more intense study of beetles in the genus Agrilus, thanks to their recent acquisition of the Eduard Jendek Collection.  The collection was developed over the last 30-40 years in Slovakia by world Agrilus expert Eduard Jendek. It boasts over 25,000 specimens, making it one of the largest private collections of metallic wood-boring beetles in the world, and a major step forward for the Nation's preventive efforts to agricultural challenges.

Before his retirement, Jendek undertook hundreds of expeditions in highly remote and difficult to access areas — or areas that have since been deforested or are no longer accessible.  The collection is the most complete private collection of the genus Agrilus ever assembled and represents half of the known valid species in the genus, contains more than 95 percent of the known species diversity in Russia and China, and holds more than 80 percent of the known diversity of species in South and Southeast Asia.

"The result of Jendek's efforts is manifested now in a collection that includes thousands of authoritatively identified specimens, many reared from recorded host plants and rare species known only from the single type specimen," said ARS Research Entomologist Lourdes Chamorro.  "The collection is also especially unique in that it is databased and includes specimens from new, unpublished distribution records."

Members of the genus Agrilus are often considered potentially invasive and therefore, destructive towards agriculture, forestry, and other natural resources. The beetle poses a threat to Ash trees in the eastern United States, and in two recent instances, the collection and Eduard Jendek have been the only ones to confirm the identity of these new pests. 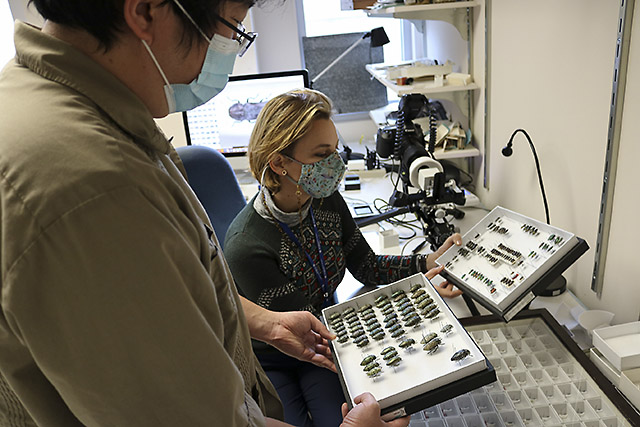 SEL researchers will use the collection to prepare and prevent future economic damage as they study the species and make predictions about the next serious pest that shares the same genes.

"Acquiring this large collection of expertly identified material will greatly enhance USDA-ARS' ability to identify potential new pest species of Agrilus within the nation," said ARS Research Associate Kojun Kanda. "With the current advances in sequencing DNA from pinned specimens, we also hope to use this material to gather molecular data that can be used for identification purposes and to study the evolution of various traits like host-plant usage."

"Because the collector is a world expert on this group, the collection is well-curated and all specimens identified," said Floyd Shockley, entomology collection manager of the National Museum of Natural History. "This really is one of those once or twice in a career major acquisitions."