June 27, 2022—The first high-quality genome of the desert locust—those voracious feeders of plague and devastation infamy and the most destructive migratory insect in the world—has been produced by U.S. Department of Agriculture Agricultural Research Service scientists.

The genome of the desert locust (Schistocerca gregaria) is enormous at just under 9 billion base pairs, nearly three times the size of the human genome.

"We were concerned that, faced with this huge and very likely complex desert locust genome, it was going to be an extremely long and difficult job. However, we were able to go from sample collection to a final assembled genome in under 5 months," said entomologist Scott M. Geib with the ARS Tropical Crop and Commodity Protection Research Unit in Hilo, Hawaii, and one of the team leaders. "The desert locust is one of the largest insect genomes ever completed and it was all done from a single locust."

That one locust was provided by chemical ecologist Baldwyn Torto with the International Centre of Insect Physiology and Ecology in Nairobi, Kenya. He and his team tracked down swarms of locusts, collecting specimens across Kenya until he had two parents that he was able to breed to produce an offspring of known pedigree.

"With the desert locust, we were dealing with a much larger genome in many fewer pieces—about 8.8 Gb in just 12 chromosomes. Next to the fruit fly, it's like an 18-wheeler next to a compact car," Geib said. "It was like sequencing a typical insect genome many, many times over. But with today's advances in DNA sequencing technologies, we are now able to generate extremely accurate genomes of insects that previously would have been unapproachable."

ARS has made the genome available to the international research community through the National Center for Biotechnology Information at https://www.ncbi.nlm.nih.gov/bioproject/814718. 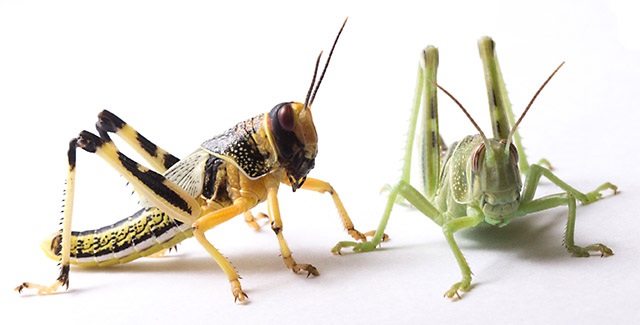 Desert locust plagues are cyclic and have been recorded since the times of the Pharaohs in ancient Egypt, as far back as 3200 B.C. In recent decades, there have been desert locust swarms in 1967-1969, 1986-1989 and most lately 2020-2022. They cause devastation in East Africa, the Middle East, and Southwest Asia, threatening food security in many countries.

Their damage can be massive. A small swarm can eat as much food in a day as would feed 35,000 people; a swarm of historic proportions covering the area of New York City eats in one day the same amount as the population of New York, Pennsylvania and New Jersey combined, according to the Food and Agriculture Organization of the United Nations.

Current desert locust control mostly depends on locating swarms and spraying them with broad-spectrum pesticides. Ultimately, this genomics work could decrease dependence on such pesticides.

"Having a high-quality genome is a big step toward finding targeted controls," Geib said. "It will also give us valuable information about relatives of the desert locust that are major pests in the Americas such the Mormon cricket, another swarming species that can impact U.S. food security."

This work is part of the Ag100Pest Initiative, an ARS program to develop high quality genomes for the top 100 arthropod pests in agriculture as a foundation for basic and applied research.