Brewer's yeast used to make beer is typically discarded once it's no longer needed. Sometimes, though, the leftover yeast is mixed into livestock feed as a source of protein and vitamins. Now, there may be even more reason to continue this practice, according to findings by a team of scientists with the Agricultural Research Service (ARS), Warren Wilson College, (WWC) and Asheville Sustainability Research (ASR), LLC of Asheville, North Carolina.

Laboratory results the team published in the journal Frontiers in Animal Science suggest that using leftover brewer's yeast as a feed additive may benefit the environment by helping cows belch less methane into the air as a greenhouse gas that contributes to global climate change. Agriculture accounts for 11 percent of all U.S. greenhouse gas emissions (5,981 million metric tons of CO2 equivalent), with ruminant animals including cows responsible for more than a quarter of that total.

Methane from cows is a waste byproduct arising from the fermentation activity of certain kinds of microbes, called methanogens, in the first of the animal's four stomach chambers, the rumen. Another group of rumen microbes, known as "hyper-ammonia-producing bacteria," are behind the animal's excretion of ammonia, a potential air- and water-quality concern. The microbes' production of methane and ammonia from food the cow eats also robs the animal of amino acids needed for growth and milk production, explained Michael Flythe, a research microbiologist with the ARS Forage-Animal Production Research Unit in Lexington, Kentucky.

Flythe's co-investigation of the preventive role that brewer's yeast may play is part of an ongoing effort to develop natural alternatives to using expensive protein supplements and monensin (a special class of ionophore antibiotic only approved for use in cattle) to keep the gas-producing microbes in check. A prior focus on that front has included incorporating red clover into the animal's diet.

Most recently, Flythe teamed with Robert Bryant (ASR) and Rhys Burns, Christopher Feidler-Cree and Denia Carlton and Langdon Martin—all of WWC—to explore the preventive potential of leftover brewer's yeast, which ferment grains used in making ale, lager and other types of beer.  By one estimate, the brewing process generates 15 to 18 tons of spent brewer's yeast per 10,000 hectoliters (or approximately 2,641 gallons) of finished beer, making it the second largest byproduct next to spent brewer's grains (SBGs). According to a 2019 study, brewers in the European Union generate 6 million tons of SBGs annually and 1 million tons of spent brewer's yeast. 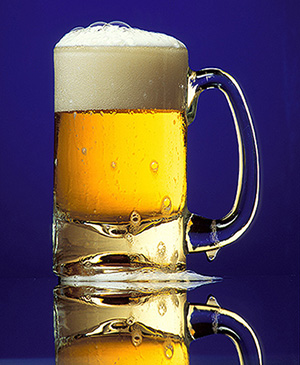 ARS and collaborating scientists are researching whether brewer's yeast left over from making beer can help cows belch less methane into the air.

During the brewing process, the yeast, known as Saccharomyces cerevisiae, absorb humolones, lupolones and other compounds from hops that contribute to beer's flavor and aroma. Humolones and lupolones are both biologically active molecules that inhibit certain bacteria and other microbes, including those that trigger the cow's release of methane and ammonia. But until recently, little research had been done to learn whether leftover brewer's yeast enriched with hops compounds could be just as effective at controlling the rumen microbes' noxious ways.

To find out, the researchers took samples of spent brewer's yeast used to make six different kinds of beer at a local brewery and added them to flasks containing live cultures of either methane- or ammonia-producing microbes. After a 24-hour incubation period, the researchers sampled the gases and analyzed them, observing a direct correlation between the concentration of hops compounds in the spent yeast and the amount of gas produced.

The team also used baker's yeast and monensin as controls for comparison. Not surprisingly, the baker's yeast, which had not been exposed to hops during the brewing process, failed to tamp down microbes' production of the gases. However, the spent brewer's yeast—flush with the hops compounds it had absorbed—curbed the microbes' methane production by 25 percent on average—a reduction comparable to monensin.

Although spent brewer's yeast is sometimes used as a livestock feed additive, Flythe said cow feeding trials would still be necessary to fully assess its potential to reduce methane and ammonia on a farm scale.

Those results, in turn, should give a better idea of the yeast's potential role as part of a larger, integrated approach to making animal agriculture more environmentally sustainable, Flythe added.