Pullman, Wash., April 25, 2022—A protein that allows the fungus that causes white mold stem rot in more than 600 plant species to overcome plant defenses has been identified by a team of U.S. Department of Agriculture Agricultural Research Service and Washington State University scientists.

Knowledge of this protein, called SsPINE1, could help researchers develop new, more precise system of control measures for the Sclerotinia sclerotiorum fungus, which attacks potatoes, soybeans, sunflowers, peas, lentils, canola, and many other broad leaf crops. The damage can add up to billions of dollars in a year of bad outbreaks.

S. sclerotiorum fungi cause plants to rot and die by secreting chemicals called polygalacturonases (PG), which break down the plant's cell walls. Plants evolved a way to protect themselves by producing a protein that stops or inhibits the fungus' PG, labeled PGIP, which was discovered in 1971. Since then, scientists have known that some fungal pathogens have a way to overcome plant's PGIP. But they had not been able to identify it.

"What you have is essentially a continuous arms race between fungal pathogens and their plant hosts, an intense battle of attack, counterattack and counter-counterattack in which each is constantly developing and shifting its chemical tactics in order to bypass or overcome the other's defenses," said research plant pathologist Weidong Chen with the ARS Grain Legume Genetics Physiology Research Unit in Pullman, Washington, and leader of the study just published in Nature Communications.

The key to identifying SsPINE1 was looking outside the fungi cells, according to Chen.

"We found it by looking at the materials excreted by the fungus," he said. "And there it was. When we found this protein, SsPINE1, which interacted with PGIP, it made sense." 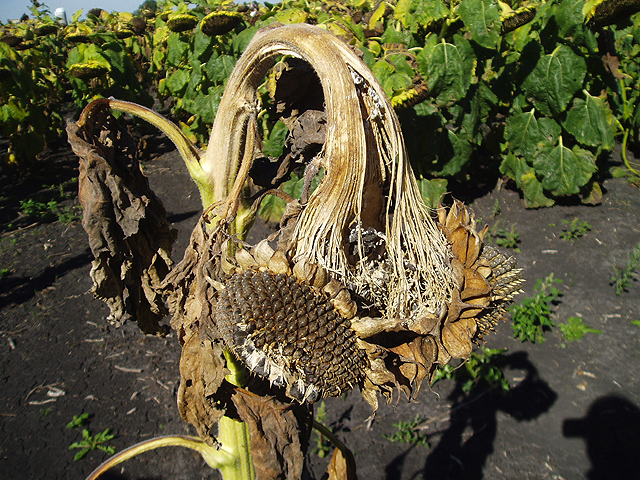 A newly discovered protein helps the fungus that causes white mold stem rot in sunflowers and more than 600 other plant species bypass the plants' defenses.

Then to prove that the protein SsPINE1 was what allowed Sclerotinia to bypass plants' PGIP, Chen and his colleagues deleted the protein in the fungus in the lab, which dramatically reduced its impact.

"I got goosebumps when we found this protein," said Kiwamu Tanaka, an associate professor in Washington State University's Department of Plant Pathology and a co-author on the paper. "It answered all these questions scientists have had for the last 50 years: Why these fungi always overcome plant defenses? Why do they have such a broad host range, and why are they so successful?"

The discovery of SsPINE1 has opened new avenues to investigate for controlling white mold stem rot pathogens, including possibly even more effective, more targeted breeding to make plants naturally resistant to sclerotinia diseases. And the team has showed that other related fungal pathogens use this counter-strategy, which only serves to make this discovery even more important.

This research is part of the National Sclerotinia Initiative, a multiorganization effort that ARS created to counterattack S. sclerotiorum because the fungus does so much damage around the world.