Boosting the Nutritional Bounty of Carrots and Onions

Agricultural Research Service (ARS) scientists are looking to beef up your salad—not with complementary slices of tender chicken, steak or other meat but rather new, improved varieties of carrot and onion.

Philipp Simon, research leader of the ARS Vegetable Crops Research Unit in Madison, Wisconsin, is coordinating the effort to fortify these popular salad items and fresh-market favorites with increased levels of beta carotene, anthocyanin and other phytonutrients.

His team is leveraging the latest genomics tools and techniques to identify the specific gene or gene regions for these health-promoting compounds in germplasm collections of onion and carrot so that they can be passed into elite commercial varieties, benefiting farmers in the field and consumers at the dinner table.

On one front, Simon is working to increase the beta carotene content of carrot varieties now grown, which, along with other carotenoids, ranges from 45 to 200 parts per million. Beta carotene is a key pigment that gives this root crop its appealing orange color. But when carrots are consumed, the beta carotene in them becomes something even better: a leading dietary source of vitamin A, which is critical to human health and wellbeing. Indeed, vitamin A deficiency is the leading cause of preventable blindness in 250,000 to 500,000 children worldwide. Vitamin A deficiency in these children also hinders their ability to fight off infection.  Anthocyanin, another pigment which gives rise to purple-colored carrots, is credited with antioxidant activity among other benefits. 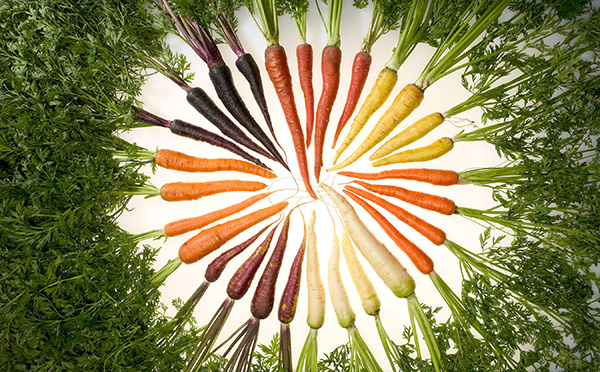 Onions, which belong to the genus Allium along with garlic, are also rich in phytonutrients—quercetin and thiosulfinates among them. Thiosulfinates give allium species like onion their pungent aroma and flavor. Cutting or crushing onion and garlic bulbs releases the thiosulfinates and exposure to air causes their breakdown into secondary compounds called organosulfates. That's not a bad thing, however. According to Simon, there's some evidence dietary sources of organosulfates help minimize the risk of heart disease, stroke and some forms of cancer.

Fructan, a carbohydrate-storing polymer, is also of interest for its health-promoting potential in the human body (though some individuals are sensitive to it and may experience bloating among other symptoms). Onions are second only to wheat as a leading source of fructan, which the body cannot digest but which helps nourish populations of beneficial intestinal bacteria.

Using genomic mapping techniques, Simon's group is hunting for so-called markers that can flag the presence of the specific gene or genes that ratchet up the production of these phytonutrients in carrot and onion. With these markers figuratively in hand, breeders could use marker-assisted selection to check for the presence of these genes in the progeny of two parent varieties without waiting for the young plants to fully mature, saving time, money and resources.

The researchers are also looking for markers linked to agronomic traits like pest and disease resistance, opening the door to new varieties that reduce production costs for growers and improved nutritional health for consumers.