Baton Rouge, La., April 7, 2022—Pol-line honey bees, a type of Varroa mite resistant honey bee developed by the Agricultural Research Service, are more than twice as likely to survive through the winter than standard honey bees, according to a study published in Scientific Reports.

Although ARS developed Pol-line bees in 2014, this study was the first time that they were tested head-to-head alongside standard honey bee stock in commercial apiaries providing pollination services and producing honey. Colonies' ability to survive winter without being treated to control Varroa mites was followed in four states: Mississippi, California, and North and South Dakota.

In this study, Pol-line colonies that were given no treatment to control Varroa mites in the fall had a survival rate of 62.5 percent compared to standard bees colonies in commercial apiaries also given no fall Varroa treatment, which had a winter survival rate of 3 percent.

"These survival results continue to highlight the importance of beekeepers needing to manage Varroa infestations. The ability to have high colony survival with reduced or no Varroa treatments can allow beekeepers to save money and time," said research molecular biologist Michael Simone-Finstrom, co-leader of the study with research entomologist Frank Rinkevich, both with the ARS Honey Bee Breeding, Genetics, and Physiology Research Laboratory in Baton Rouge, Louisiana.

This research was the culmination of breeding efforts to develop honey bee colonies with naturally low Varroa populations that began at the Baton Rouge lab in the late 1990s.

Winter colony survival is crucial for beekeepers because in February each year, about 2.5 million honey bee colonies are needed in California to pollinate almond crops. Larger, healthier colonies bring beekeepers premium pollination contracts at about $220 a colony. 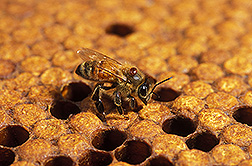 An ARS-developed line of bees that naturally has low levels of Varroa mites is more than twice as likely to survive the winter than standard honey bees.

Varroa mites can cause massive colony losses; they are the single largest problem facing beekeepers since they spread to the United States from Southeast Asia in 1987. While miticides used to control Varroa exist, resistance is developing to some of them.

"We would like to replace reliance on chemical controls with honey bees like Pol-line that have high mite resistance of their own and perform well, including high honey production, in commercial beekeeping operations. Pol-line's high mite resistance is based on their behavior for removing Varroa by expelling infested pupae—where Varroa mites reproduce—a trait called Varroa-sensitive hygiene (VSH)," said Rinkevich.

"Beyond Pol-line bees, we need to create advanced and easy breeding selection tools that beekeepers can use to select resistance traits in their own bees to promote VSH behavior in honey bees across the country," Simone-Finstrom said. "The great thing about this particular trait is that we've learned honey bees of all types express it at some level, so we know with the right tools, it can be promoted and selected in everyone's bees."

Evolutionary ecologist Thomas O'Shea-Wheller, now with the University of Exeter in England, who worked on the study while a post-doc with Louisiana State University under professor Kristen Healy pointed out, "This kind of resistance provides a natural and sustainable solution to the threat posed by Varroa mites. It does not rely on chemicals or human intervention."

In addition, overall winter survival, the scientists examined the levels of viruses in Pol-line and standard bee colonies that are commonly transmitted by varroa mites.

"Interestingly, when we looked at the levels of virus infection separately from the levels of mite infestation, we found there wasn't a strong correlation between viral loads and colony survival. You could not use the level of these viruses as good predictors of colony losses," Simone-Finstrom said.