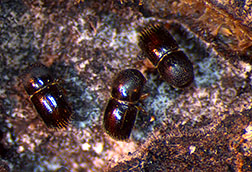 Adult female Ambrosia beetles such as this species—the black stem borer (Xylosandrus germanus)—farm fungal gardens in the tunnels they make in fruit and ornamental trees.

Scientists Bolt Down the Defenses Against Ambrosia Beetles

Exotic ambrosia beetles are costly pests of ornamental and fruit trees nationwide—from front-yard plantings of Japanese maple and oak to commercially grown orchards of cherry, peach, plum and even avocado.

Now, however, Agricultural Research Service (ARS) scientists may have found a way to turn the tables on the beetles. Unchecked, the two- to three-millimeter long pests tunnel into the sapwood of host trees and expose them to symbiotic fungi that obstruct the flow of nutrients.

The researchers' tactic exploits a key weakness of ambrosia beetles—namely, their attraction to ethanol emitted by stressed, injured or dying trees and a reliance on the alcohol to "farm" gardens of the fungi as food without interference from other competing microbes.

Trees severely infested by the beetle-fungus duo cannot be saved, so careful monitoring and preemptive measures must be taken beforehand. These include deploying ethanol-baited traps to monitor the beetles' flight and timing insecticide treatments to deter them from boring into the trees on which they land. However, the traps also tend to capture non-target beetle species, obscuring accurate counts and monitoring.

Michael Reding and Christopher Ranger, entomologists with the ARS Application Technology Research Unit in Wooster, Ohio, tried a different approach. Instead of the standard bottle traps, they used ethanol-infused bolts cut from the stems of young host trees—red maple, American elm, sassafras and dogwood among them.

In nursery trials, the researchers hung both the traps and bolts (with and without ethanol) about 1.6 feet off the ground using steel rods and compared the number and types of ambrosia and other beetle species that visited them.

Among results reported in the November 2019 issue of the Journal of Economic Entomology:

The researchers will further investigate this "drill and fill" variation as a way to extend the bolts' use for monitoring purposes as well as to facilitate screening of different insecticide treatments.

Such screening currently involves injecting trees with ethanol to lure the beetles so that the insecticides' effectiveness against them can be evaluated. However, using the bolts may help reduce some of the time, labor and expense that's involved, according to the researchers.