It's nothing personal to us humans and let me assure you that this behavior has nothing to do with full moons or anything that may live under your bed at night. Sometimes an insect's monster-behavior is nothing more than the result of good old-fashioned circumstances.

According to scientists in the U.S. Department of Agriculture's Agricultural Research Service, the genus Calyptra Ochsenheimer (Calyptra) includes species commonly known as Vampire Moths—named simply for their ability to pierce flesh and feed on mammal blood. 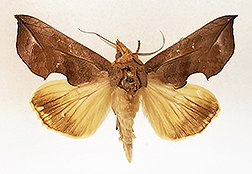 The Calyptra pseudobicolor Bänziger is an opportunistic feeder that has fed on the blood of agricultural animals, and even humans.

They can usually be spotted in Southern Europe, Eastern African, and the Sub-Himalayan regions of South Asia. There is one species of Calyptra in North America, but it's not known as a blood-feeder. At first glance you'll think that the moth doesn't look very foreboding. Vampire Moths are medium sized with a muted earthy color and a wingspan ranging from 35 to 72 mm in size. The thing is that they have long proboscides that resembles a needle (or a fang), and barbed hooks that are used for piercing through both thick and hard-skinned fruits. Recent research supports previous studies that suggest that blood-feeding moths may engage in this behavior based on the regional availability of mammalian versus vegetative hosts.

The ancestors of vampire moths fed on hosts like peaches, plums and citrus varieties. Scientists have found that male vampire moths are more likely to suck blood than females. Female moths stick to feeding on fruit; the larvae feed on leaves of fruit trees and other plants. The females suck fruit juice and feed on nectar, and the larvae feed on leaves.

So, what does this mean for us humans who learned at an early age to swat away any insect that may fly a little too close for comfort?

It means that vampiric behavior is real. Even if the vampire is an insect and considers our blood second best to peaches and oranges. They may indeed bite you and suck your blood, but they are fortunately not known to be vectors for disease.