There's nothing cool about being used by someone. It can be quite frustrating and leave you feeling—drained.

If this describes your current situation, you should feel comforted that scientists at the U.S. Department of Agriculture's Agricultural Research Service recently found that spiders may feel just like you after their innards are consumed, juice-box style, by cunning wasp-predator Philolema palanichamyi.

Originally from India, the Philolema is a black wasp, only 2mm in length, that has recently spread to the Canary Islands and southern coast of Spain with its invasive spider host. It's currently unknown how the Philomela selects a spider to serve as host, but researchers think they may use physical and chemical cues, like other parasitic wasps. It could also be possible that the presence of large amounts of webbing or the aromas emitted by the spiders themselves attract the insect. 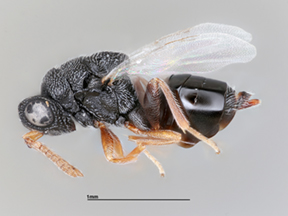 This wasp, Philolema palanichamyi, is one of several related species that uses spider eggs as a host to lay its eggs.

Its claim to fame involves selecting a spider's egg sac to host its growing larvae. Once the Philolema lays eggs in the unsuspecting spider's egg sac, its larvae hatch and begin feeding on the nutritious spider's eggs, leaving empty eggshells behind.

"It's one of nature's true scary stories," said ARS Scientist and Research Leader Dr. Michael Gates. "Once the larvae have consumed enough eggs, they enter the pupal stage inside the spider egg sac. However, the spider sometimes gets revenge on the emerging adult wasps that may become prey in the webbing of the spider whose eggs they consumed!"