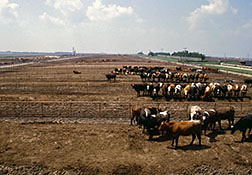 ARS scientists are working on ways to get more manure from feedlot operations to farms where it can be used to boost crop yields. Photo by John Nienaber.

Reconnecting Livestock and Crop Farming to Transform the Use of Manure

Agricultural Research Service (ARS) scientists are developing an innovative approach to address a major environmental challenge facing the nation's animal farmers: the accumulation of nutrients in the manure.

Manure produced in livestock and poultry operations has been increasing since the 1950s when large-scale feeding operations, along with large-scale crop farms, began to replace many of the nation's small, family-run farms that traditionally produced both crops and livestock and used the manure as fertilizer to boost crop yields.

The transition has created efficient, high-yielding crop and livestock operations, but it has also severed a longstanding symbiotic relationship where the excess nutrients created by the manure had productive uses. Though some animal farms typically use some manure to grow feed, most animal farms have insufficient land for using all of their manure. The surplus can pose an environmental threat to air and water quality. Yet manure contains phosphorus and nitrogen, which are key nutrients for many crops that are now supplied by commercial fertilizers.

"The question is what to do with the manure from livestock operations with surplus manure nutrients, and how to get it to farmland where it is needed most," says Sheri Spiegal, an ARS scientist in Las Cruces, N.M.

Spiegal and her colleagues have proposed using "manuresheds" to create systems that reconnect crop and livestock production so that more manure can be used to fertilize more crops. The manureshed concept is designed to promote the practices, technologies and management systems that would clean up manure while building healthy soils and supporting crop yields. It also illuminates the fundamental challenges facing sustainable manure use and creates a framework for addressing the problem in a way that's clearly sustainable, the researchers say.

They outlined how the concept would work in a recent paper in the journal Agricultural Systems. They collected data on the manure produced in feeding operations, the fertilizer needed for crops, and the nutrients removed by them in 3,109 counties across the United States. Based on that data, they classified the counties as either manure "sources" or "sinks," depending on whether their manure nutrients exceeded use by their crops (sources), or whether their crops could use the excess nutrients to fill deficiencies or substitute for fertilizer (sinks).

Results showed that there is potential to redistribute manure from source to sink counties across much of the country, with source counties in 40 of 48 states—and much opportunity in the South.

The study authors also identified clusters of counties dominated by one or two production systems, such as dairy or poultry, and they highlighted opportunities for redistributing manure by joining the clusters into four regional manuresheds—in the Northwest, Southwest, Midwest and Southeast. Possibilities for efficient transport and use of excess manure from each animal industry are also discussed in the paper.

The researchers note that efforts similar to what they propose have been underway in some areas. Truckers from western Pennsylvania, for instance, now haul hay to mushroom growers in the eastern part of the state and pick up poultry litter for the return trip west, effectively exporting poultry litter from the Chesapeake Bay watershed. Programs in Minnesota, Maryland and Arkansas also offer farmers and producers various incentives to transport manure from feedlots to farms.

The paper can be found here.