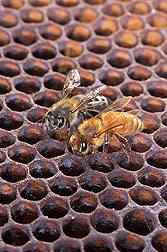 An African-European hybrid honey bee (left) and a European honey bee (right). Despite color differences between these two specific bees, mostly the two types of bees can't be identified by eye.

BATON ROUGE, LOUISIANA, July 6, 2020—Puerto Rico's population of African-European hybrid honey bees (AHB) are famously known for being much gentler than their continental counterparts. Now Agricultural Research Service (ARS) scientists and their colleagues have found that this reduced defending of the nest is determined by colony-level genetics as opposed to individual bee's DNA, according to a study just published in the Proceedings of the National Academy of Sciences.

"It's as if your home environment is a better predictor of how belligerent your temper is than are your individual tendencies in responding to situations. In more scientific terms, for these bees, it is the frequency of the appearance of a gene in the genetic makeup of the colony that is a better  predictor than is the genetic makeup of a single bee," explained ARS geneticist Arian Avalos with the Honey Bee Breeding, Genetics, and Physiology Research Unit in Baton Rouge, Louisiana, who led the study.

Defensiveness in honey bees arises from the coordinated actions of colony members, primarily nonreproductive "soldier" bees. Some soldier bees act as guards, patrolling the hive entrance and release alarm pheromones when they encounter an intruder, while other soldiers respond to the alarm by flying out of the hive to sting the intruder. Honey bees die after stinging, so the decision that stinging is called for is a serious one.

"We were also able to winnow down the differences in genetics between aggressive and gentle African-European hybrid honey bees from having to analyze the whole genome to just 256 genes" Avalos said. Honey bees have a total of about 10,000 genes in their genome.

AHB are the descendants of honey bees imported from Africa into Brazil in the 1950s in the hopes of breeding a bee better adapted to the tropics. They instead escaped, interbred with European honey bees (EHB) already present and spread south to Argentina and north into Central America and finally into the United States in only 40 years.

African honey bees, which are a separate sub-species of honey bee distinct from EHB, are best known for their strong, vigorous defense of their nests. In the United States, this behavior has been evident and predominant wherever AHB spread and interbred with EHBs.

AHB arrived to Puerto Rico in 1994 aboard ships carrying cargo like oil pipes from South America and were no gentler than other AHB. However, within a few years of arrival to Puerto Rico, AHB began to show reduced defense of their nests and today are about on par with EHB in this trait. Researchers suspect several factors could have contributed to this process all related to the challenges of surviving in a remote oceanic island with a high density of human population. The process may have also been abetted by major hurricanes such as Irma and Maria, which could have reduced the bees' overall population and genetic diversity.