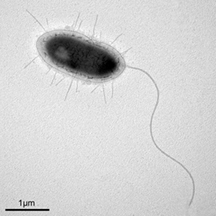 The tidal marshes along the lower Potomac and James rivers in Maryland and Virginia support a rich array of aquatic and terrestrial wildlife—from blue crab and bass, to mud turtles, white-tailed deer and waterfowl among other inhabitants.

Now, from this same marshland habitat comes a newly discovered species of bacteria that could help keep destructive crop pests at bay.

A team of Agricultural Research Service (ARS) scientists collected the bacterium from marsh water and sediment samples. They named it Chromobacterium phragmitis and determined that it was a new species using genetic sequencing techniques in studies at the ARS Invasive Insect Biocontrol and Behavior Laboratory (IIBBL) and the agency's Electron and Confocal Microscopy Unit—both located in Beltsville, Maryland. The researchers have since begun testing the bacterium's lethality to the cabbage looper, seedcorn maggot, red flour beetle and other pests.

Their efforts are part of the IIBBL's overarching mission to find cost-effective and sustainable means of insect pest control that can ease the reliance on synthetic insecticides—or serve as an alternative to them, such as for use by organic growers.

The researchers' tests of C. phragmitis, reported in the January 2020 issue of the Journal of Entomological Science, expand on the findings of retired ARS microbiologist Phyllis Martin. She identified the very first insecticidal Chromobacterium species in 2003 from decomposed hemlock leaves collected in the Catoctin Mountain area of north-central Maryland. That species, which Martin named C. subtsugae, was subsequently licensed by a commercial firm and sold under the trade name Grandevo.

"Chromobacterium species are not insect pathogens, they just happen to make things that kill insects. This is actually very nice, because you don't need to spray living bacteria," commented Michael Blackburn, an ARS entomologist with the IIBBL.

Those compounds, which include Chromamide A, proved toxic to varying degrees to Colorado potato beetles, corn rootworms, diamondback moths, whiteflies and other agricultural pests, some of which have become resistant to commonly used insecticides.

According to Blackburn, upcoming research will include determining what makes C. phragmitis toxic to these pests and identifying non-target insects that could be affected—information important to ascertaining the bacterium's commercial prospects as a bioinsecticide.

C. phragmitis is one of several Chromobacterium species that the team has discovered, and in particular by Farrar. His "prospecting" for this group of purple-colored bacteria ranged from Maine to Florida. The team named C. phragmitis after the wetland grass species that dominated the marshland sites where the microbe was found. It is further described in the International Journal of Systematic and Evolutionary Microbiology.

"Chromobacterium is known to inhabit wet habitats, so we sampled as many types of marshes and bogs as we could find," explained Blackburn. "Thus far we don't know if the insecticidal factors from other species are the same or different as the commercialized one. However, IIBBL 113-1 was the most toxic strain of C. phragmitis we isolated."