BELTSVILLE, MARYLAND, November 17, 2020—Five Asian giant hornets (Vespa mandarinia), from the first nest found in the United States, have taken a trip across the country to a Washington, D.C. area Agricultural Research Service (ARS) facility and the Smithsonian for study and preservation.

ARS research entomologist Matt Buffington with the ARS Systematic Entomology Laboratory in Beltsville, Maryland, accepted delivery of the flash frozen, 2-inch long hornets that were removed from a cavity in a tree near the town of Blaine, Washington on Oct. 24.

First, Buffington, whose lab is located at the Smithsonian's National Museum of Natural History (NMNH) in Washington D.C., checked the general condition of the hornet shipment, which contained two pupae, one worker, one male and one queen from the Washington State nest all provided by Washington State Department of Agriculture entomologist Chris Looney and ARS' Buffington. Then, Buffington transported the hornets to the NMNH's Biorepository in Suitland, Maryland, for cryopreservation. The Animal and Plant Health Inspection Service coordinated the transfer of many other specimens to partner labs around the United States.

"These Asian giant hornet specimens are part of what we are terming nest zero," Buffington said. "They were taken in perfect condition, we know exactly where they were found, and now we are moving them directly into cryotanks for long-term preservation. Researchers now and into the future will have a genetic gold standard for comparing Asian giant hornets in this country." 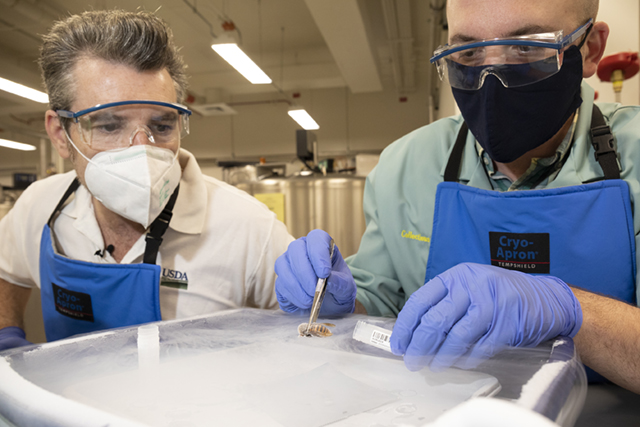 Once the specimens were taken into the "cold storage room," they were transferred to a table kept at below zero temperatures with liquid nitrogen, databased, placed in special cryo-vials and finally, lowered into silver liquid nitrogen containers, which will maintain the specimens' tissue in perfect condition.

"Our plan is to do fundamental population genetic studies to help establish the baseline genetic signature of nest zero," Buffington said. "This data will go into a comparative framework that will help researchers try and understand where in Asia the members of this nest may have come from and if future finds are from different areas or are related to this nest. Another ARS group is leading this genomic research."

The NMNH Biorepository is a massive collection of cryogenically preserved, genomic-grade samples of the Earth's diversity. It is a resource for scientists worldwide. Between the Biorepository and the pinned collection, the National Insect Collection at NMNH contains about 36 million specimens representing 450,000 species, and nearly 60 percent of known insect families.

USDA and NMNH have had a partnership since the late 1870s to collect, preserve, and study important insects, which allows both organizations to make the most of their resources.

"We have certain areas of expertise in what needs to be collected and NMNH has facilities and resources that can be counted on to preserve these specimens into the future," Buffington said.