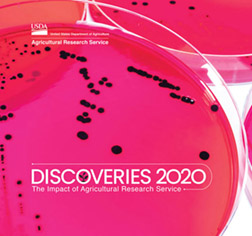 WASHINGTON, July 30, 2020—The U.S. Department of Agriculture's Agricultural Research Service (ARS) today announced the launch of its Scientific Discoveries 2020 website to highlight the national and international impact of ARS research on agriculture from the farmer's field to the consumer's table.

"ARS researchers are global leaders in agricultural innovation and take great pride in delivering scientific solutions to agricultural challenges with excellence and integrity," said ARS Administrator Chavonda Jacobs-Young. "The accomplishments in this year's Scientific Discoveries are just a fraction of the amazing work our scientists perform year after year."

The multimedia website highlights prime research in the Northeast, Southeast, Midwest, Plains and Pacific West regions of the United States as well as international locations in Europe, Australia and South America.

Northeast: ARS scientists are using gene editing to assist in the development of a vaccine for African Swine Fever, which has devastated the pork industry in the eastern part of the world.

Southeast: A team of researchers, including ARS scientists, is on the cusp of releasing the world's first treatment for peanut allergy. The team developed an oral immunotherapy drug that is nearing final approval by the U.S. Food and Drug Administration.

Plains: ARS scientists and their collaborators have developed a rapid, affordable test that can accurately detect the Zika virus by just shining a beam of light for a few seconds on the species of mosquito that spreads it.

International: ARS researchers at the European Biological Control Laboratory's substation in Thessaloniki, Greece, have developed a molecular method that could revolutionize the surveillance of sand flies. Leishmaniasisis a disease transmitted by the sand fly and although it is not common in the United States, it poses a major threat to the U.S. military deployed overseas.

As the chief, in-house scientific research agency of the U.S. Department of Agriculture, ARS has 682 funded projects and 8,000 employees in over 90 field locations dedicated to supporting the well-being of all people through research.