ALBANY, CALIFORNIA, November 9, 2020—Agricultural Research Service scientists have confirmed a biocontrol insect they have been releasing to fight the invasive weed known as Cape-ivy has become established in at least four locations along the California coast.

Research entomologist Patrick Moran and entomologist Scott Portman, with the ARS Invasive Species and Pollinator Health Research Unit in Albany, California, have been releasing the shoot tip-galling fly (Parafreutreta regalis) at 18 locations along the coast, from Humboldt county in northern California to San Luis Obispo in central California, in hopes of developing a self-sustaining control for Cape-ivy.

Since 2016, more than 5,000 shoot tip-galling flies have been released through the ARS research program. Additional releases have been made in southern California through a collaboration with researchers at the University of California-Santa Barbara.

Considered one of the top ten worst invasive weeds on the West Coast, Cape-ivy has invaded coastal habitats from California to Oregon. It smothers and displaces native plants, clogging water flow along stream banks, interfering with flood control and consuming valuable water resources.

In California alone, Cape-ivy covers more than 500,000 acres, often invading areas unsuitable for chemical or mechanical control. It forms impenetrable mats and climbs to drape trees and shrubs. Although it belongs to the sunflower plant family, it is aptly nicknamed the "kudzu of the west." 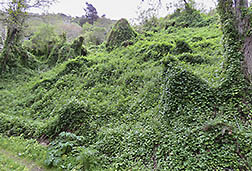 ARS scientists have established a reproducing population of shoot tip-galling flies at Glen Deven Ranch (Big Sur Land Trust) as a biocontrol for Cape-ivy, one of the top ten worst invasive weeds in California.

Cape-ivy is native to South Africa, where it inhabits coastal sites and mountain forests. Its frequency there is limited in part because of natural insect enemies, including the shoot tip-galling fly. Before the fly was released in California, now retired ARS research entomologist Joe Balciunas tested the fly against 99 other plant species to ensure it would not harm wild native and crop plants in California. Field observations in South Africa confirmed that this fly attacks no other plant species but Cape-ivy.

Since 2018, the number of Cape-ivy galls has multiplied by up to 40 times at these four locations; each gall indicating a place where a female fly has laid her eggs. Counting galls is the best way to measure the population density of these ¼-inch long insects.

"This increase means that now there are reproducing, self-sustaining populations of flies spreading across the four sites, beyond their original release boundaries. If the fly's population continues to increase at the current rate, by the end of 2020, some locations may have up to 50 galls per square meter of Cape-ivy. That level of pressure will likely have a significant negative impact on the plant's ability to thrive. I'd call that real progress," Portman said.

As its name suggests, the shoot tip-galling fly lays eggs inside the shoot tips (new growth) of Cape-ivy. Once the eggs hatch, the fly larvae feed inside the growing shoot. Responding to larval secretions, the plant forms a hollow, marble-sized gall. Adults emerge by breaking through a small, thin "window" that the larvae chew in the gall.

During the past year, Portman has been trying out a potentially more efficient release method. Originally, flies in cages, each with about 40 female and 40 male flies, were placed out at sites. After 10 days, cages are removed and the site monitored for galling activity. Now greenhouse-reared, potted Cape-ivy plants that already have numerous galls are put into the field.

"The advantage of the new method is that it immediately increases the number of galls in the field, which should improve the chances for fly establishment, and the plants aren't as obvious as cages, so people will be less likely to disturb them," Portman said.