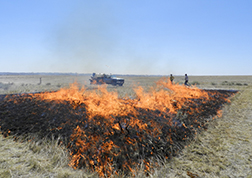 When it comes to restoring rangeland habitats, there is no replacement for "prescribed fire," according to Agricultural Research Service (ARS) ecologists.

Using fire with a stated objective—a strategy known as prescribed fire—is widely recognized as an effective way to remove standing, dead vegetation on rangelands. But fear of fire has left some to wonder if mowing or close grazing confers the same benefits.

Lance Vermeire, an ecologist at the ARS Fort Keogh Livestock and Range Research Laboratory in Miles City, Montana, compared the benefits of mowing rangelands with setting them on fire to rid them of unwanted debris and reset their ecological balance. He found in a recent study that fire is better than mowing because it restores soil health and promotes growth of grass that is more nutritious for grazing cattle.

"The results show that mowing is not the same as fire and cannot replace it. Fire is unique," he says.

Wildfires are a part of the natural cycle of growth and regeneration in many Western habitats and although all fire effects are not always positive, rangeland managers have used fire to control invasive weeds, enhance forage quality, increase plant diversity and maintain wildlife habitats. The nation's rangelands are owned and managed by a patchwork of government agencies and private interests and some managers are reluctant to use fire, opting instead to mow or graze areas to get rid of unwanted plants, open habitats to sunlight and restore native grasses.

"If a rangeland needs to be revitalized, the question often being asked is, 'what tools will best accomplish that?'" Vermeire says.

The question is important because rangelands cover millions of acres across the Great Plains and they're essential for grazing livestock and as wildlife habitat. Rangelands are also a major source of water supplies.

Droughts and drier conditions brought on by climate change make it essential to carefully control any prescribed fire, Vermeire says. But the drier conditions also mean that there is more combustible material in many areas just waiting for a spark, which could be a good reason to consider prescribed fire to reduce unwanted debris, he says. "Fires are going to happen, so isn't it better to control the conditions, and decide what you want burned, and when and where you want to burn it, rather than waiting for a wildfire to break out and burn unchecked," he says.

To compare mowing with fire, Vermeire mowed the grasses in experimental plots during the May growing season, set prescribed fires in others and left others as control plots. About two months later, he measured the amount of plant material or "biomass" in the plots, analyzed the soils for nutrients and assessed the forage quality of the dominant grasses. A year later, he repeated the same measurements and assessments.

He found that while mowing offered some benefits, fire proved to be a better tool for releasing nutrients into the soil, increasing the total amounts of grass and producing grass with more of the nutrients essential for healthy cattle, such as nitrogen and phosphorus.  The study was partially funded by the U.S. Forest Service. The paper, published in Rangeland Ecology and Management, can be found here.