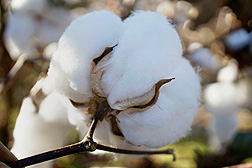 Pima cotton could become an option for some growers in the Texas High Plains as water becomes more scarce. Photo by John P. Brooks.

Cotton growers in Texas face unpredictable rainfall, limited water for irrigation and fluctuating prices for the Upland cotton they produce. With such problems becoming more pronounced each year, they might want to consider new options such as Pima cotton production, according to Agricultural Research Service (ARS) scientists.

Upland cotton is used in a wide variety of products and growers in the Texas High Plains have been producing it for years because it is well suited to the region's hot, dry climate. But there is increasing interest in producing Pima cotton there because it is higher quality and it fetches prices that are up to 50 percent higher. Pima cotton, when irrigated, grows well in El Paso, TX, parts of Arizona, California and New Mexico.

But a key question for Texas producers is how well Pima cotton would perform with the limited water available and under a climate with a shorter growing season. About 40 percent of the cotton produced in the Texas High Plains is irrigated, and that water comes from the Ogallala Aquifer, which is not accessible to many growers and is being depleted.

ARS researchers compared key qualities of Pima and Upland cotton produced for two years under four irrigation levels in test plots in Lubbock, Texas. They grew two Pima lines and two Upland varieties at four irrigation levels: full irrigation, at 50 and 25 percent of that level, and in plots watered only by rainfall. They then evaluated the cotton produced for its lint quality, yield and other key traits. The study was led by Travis W. Witt, an ARS agronomist in El Reno, Oklahoma. His colleagues included ARS researchers  Mauricio Ulloa and Robert C. Schwartz, who are based in Lubbock and Bushland, Texas, respectively; and Glen L. Ritchie, who is with Texas Tech in Lubbock.

"The results show that Upland cotton responds to irrigation so that if you can irrigate, it is probably the best choice. But if water is in short supply and you can't irrigate, Pima might be the best option with adapted varieties for specific regions," Witt said. The findings could also apply to areas beyond the Texas High Plains where water is scarce, he said.

Results were recently published in Field Crops Research. They can be found here.