Apis mellifera is not native to the Primorsky Territory on Russia's Pacific coast, but was first moved there in the last century. At that time, pioneers from western Russia took advantage of the completion of the Trans-Siberian Railway and moved bees from European western Russia to the Primorsky Territory in Asian far-eastern Russia. This far-eastern area of Russia is within the natural range of Apis cerana, the original host of Varroa jacobsoni. Thus A. mellifera was brought into the likely range of V. jacobsoni even before the parasite was scientifically described in 1904. This probable long association of V. jacobsoni and A. mellifera in the region has engendered one of the best opportunities in the world for A. mellifera to develop genetic resistance to V. jacobsoni.

The USDA-ARS Honey Bee Breeding, Genetics & Physiology lab, Baton Rouge, LA, explored whether such resistance might be found in Primorye populations of honey bees in the autumn of 1994. Data were collected showing that colonies in the area did have Varroa infestation, but that the levels were lower compared to U.S. colonies. 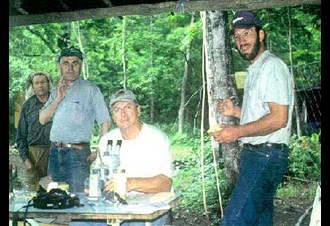 In June 1995, a test apiary was established in Primorsky. Queens from a variety of sources in the territory were introduced into 50 colonies. Mite levels were equalized among colonies, and thereafter no treatments for mite control were undertaken. Between August 1995 and September 1996, monthly infestation rate data for worker and drone brood were collected. For comparison, we ran a test in Baton Rouge, collecting similar data. 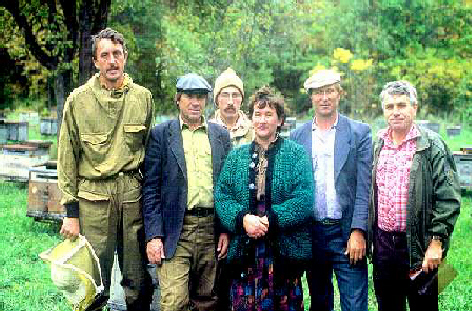 Russian cooperators, among them Dr. Victor Kusnetsov (right) and Anatoly Reshetnikov (second from left), the beekeeper who managed the experimental colonies used in the project.