Results from a natural history study of Varroa jacobsoni infestations in Apis mellifera in the Primorsky territory of Russia led to the importation of 100 queen honey bees into the United States in 1997.   Early in February 1998, the queens and their colonies were moved to secure apiaries near the USDA, ARS, Honey Bee Breeding, Genetics and Physiology Laboratory in Baton Rouge, Louisiana, and lab personnel to began research on the potential resistance to V. jacobsoni.

The Russian colonies were treated to reduce mite populations below detectable levels.  At the same time Varroawere being reared in domestic colonies to provide a source of inoculum mites for the test.

A bulk package of approximately 70 lbs of bees was made up from the domestic source colonies, then divided into smaller inoculation packages containing an average 1,797 worker bees with 1 mite per 6.9 bees. 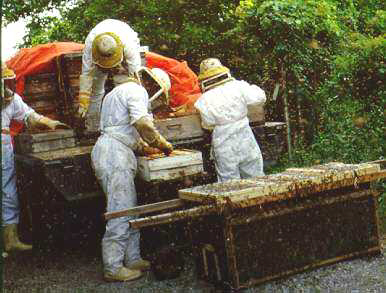 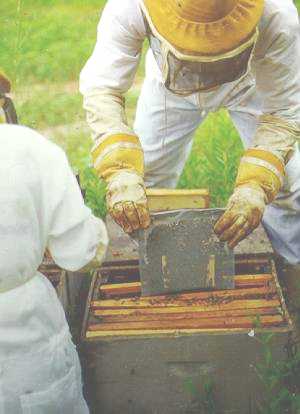 Inoculation packages were introduced into the Russian and the control colonies.

Sticky board traps were placed on the bottom boards of the colonies to catch any falling mites. 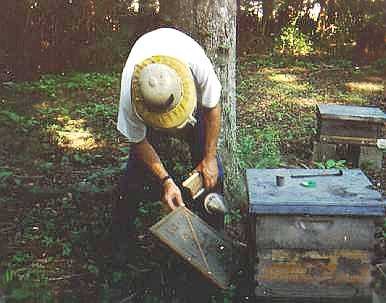 Ten days after inoculation, the boards and cages were removed and the bees, remaining mites in the cages and mites on the sticky boards were counted. These counts were used to estimate the total number of mites that successfully entered each colony from the inoculation cage.  After 9 weeks, the total number of mites in each colony was estimated from examination of worker brood, drone brood and adult workers. The sum of the estimates of mites in the worker brood, drone brood and adult bees provided an estimate of the number of adult mites in the colony.

The population growth of mites in each colony was calculated, and this growth was termed the "Mite Index".  This is an expression of the number of times the mite population has increased onefold.  The expected mite index was determined by using a mathematical model (Fuchs, Apidologie 1990).

The distribution of colonies according to their mite index.  "11.4" is the mite index calculated from a mathematical model for colonies not having resistance to Varroa jacobsoni.

ased on the results of this test, forty of the queens that were imported from Russia were chosen as "breeders" to found a stock of resistant honey bees and to produce offspring for further tests.

While the test of the colonies produced by the imported queens was being conducted, general observations were made on a weekly basis concerning the honey production, general vigor and disease status.  Although the mite index for each colony was an important factor determining whether or not a colony would be used in stock formation, these other factors also contributed.

Future research with the Russian stock will focus on large multi-state field trials.  The field trials are intended to supply information concerning comparative V. jacobsoni resistance and comparative honey production of the Russian stock in commercial beekeeping.  Favorable results from these trials will lead to a general release of the stock to the beekeeping industry.