The total number of varroa mites in a colony of bees is determined by estimating the number of mites on adult bees and the number of adult mites within the capped brood cells. Our procedures for these measurements are as follows:

A sample of adult bees is washed from each colony to determine the mite load on the adult bee population. The sample of bees is shaken in a jar of alcohol and poured over a wire mesh. The wire screen retains the bees while dislodged mites flow to the pan below.

The area of capped brood being estimated with a wire grid. 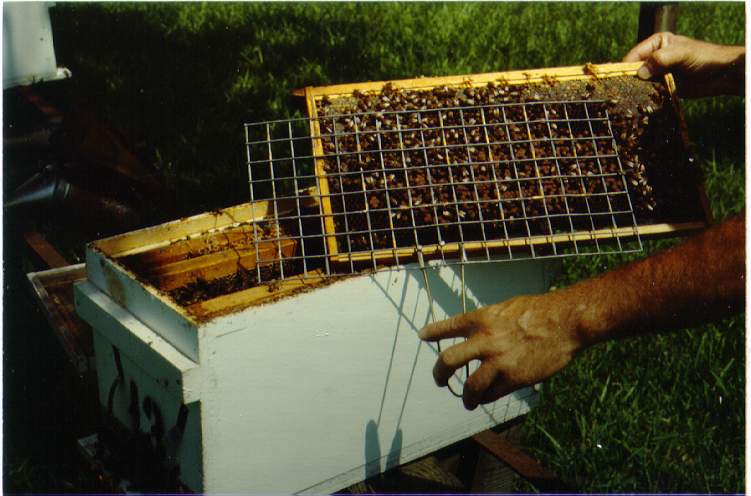 3. Estimate infestation rate of capped brood. We select two brood combs from each colony to estimate the number of mites per 100 capped cells. We choose one comb containing young capped brood (pre-pupae and white-eyed pupae) and the second comb containing older brood (purple-eyed and tan pupae). We open 50 brood cells from each side of a brood comb and count the number of varroa mites within each cell (Figure 3). Brood cells are opened along a straight horizontal line that bisects the brood patch along its middle. Only foundress (or adult females that entered the cell) mites (and not progeny) are counted in this estimate. If 56 foundress mites are found in a total of 200 cells, we report 28 mites per 100 brood cells or 0.28 mites per brood cell. 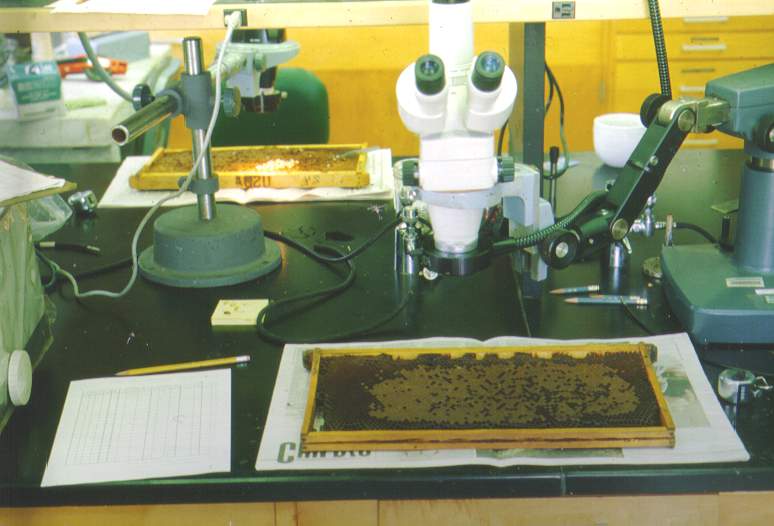 The varroa mite infestation rate for a colony of bees is found by examining 200 brood cells using a dissecting microscope (and a bright light source). Typically, we uncap 50 brood cells from each side of two combs. Cells are uncapped in a straight line across the center of the patch of capped brood.