Results from a natural history study of Varroa jacobsoni infestations in Apis mellifera in the Primorsky territory of Russia  led to the importation of 100 queen honey bees into the United States in 1997.   Early in 1998, the queens and their colonies were moved to apiaries near Baton Rouge, Louisiana, and lab personnel began research on their potential resistance to V. jacobsoni.

Based on the findings of the resistance test, 40 Russian queens were selected to produce daughter queens for two extensive field trials in which the resistance of the Russian honey bees to V. jacobsoniwas directly compared to that of domestic honey bees commonly used commercially in the United States.  One trial began in mid-summer of 1998 and ended in early December 1999.  The other trial was conducted in the spring and summer of 1999 in commercial apiaries in Iowa, Louisiana, and Mississippi, in cooperation with Mr. Manley Bigalk, Mr. Steven Bernard and Mr. Hubert Tubbs, respectively. All of these gentlemen are commercial beekeepers who are primarily honey producers. In  August of 1999, when most of that year's data were collected, ARS held a teleconference with these beekeepers.  These beekeepers had seen the bees in their own apiaries and could evaluate the quality of the stock for general beekeeping characteristics as well as help to evaluate the commercial implications of the data.  The beekeepers recommended that a procedure to release the Russian honey bees begin. 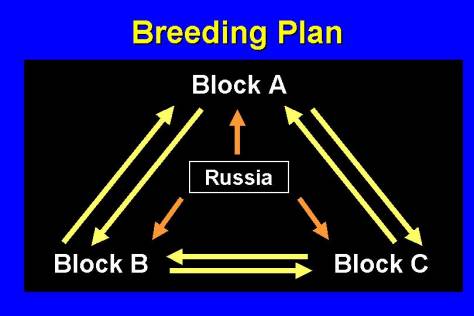 The release program is not a one time event.  Rather, it is a cycle of releases resulting from an underlying stock maintenance and selection program (see the figure above).  The queens that produced the colonies having the most resistance to V. jacobsoni, and were otherwise acceptable for commercial beekeeping, were divided into three groups or "blocks".  For the purposes of maintaining the stock, daughters of the queens of each of the three blocks are mated with drones produced by queens from the other two blocks.  For purposes of selection in 1999, the queens in block "A" were used to produce daughters for the large field trial with cooperating beekeepers.

An isolated island mating station was used in order to have natural matings of the desired combinations of queens and drones.  We chose natural matings in order to maintain the high genetic diversity afforded by queens mating with about 20 drones if allowed to naturally mate. 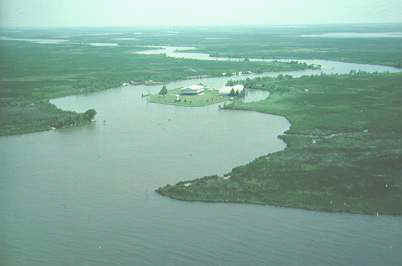 The conservation camp at the mouth of  Bird Island bayou can be seen on Marsh Island.

The Honey Bee Breeding, Genetics & Physiology Laboratory entered into another cooperative agreement with the Russian Academy of Sciences.  Under this agreement, initial screening of queens in Russia will be done each year for three more bee seasons.  Each year, the best of the queens studied in Russia will be brought to the United States for further study and possible incorporation into one of the three queen line blocks,   This program is underway.  In June of 1999 and July2000, an additional 120 queens were collected and brought to the United States.  As before, these queens went to the island quarantine facility.  The 1999 queens were screened for resistance to V. jacobsoni during the 2000 bee season, and the 2000 queens will be screened during the 2001 bee season.  Also, laboratory staff will be evaluating other queens from Russia in addition to those that are screened for the program by Russian scientists.  By the end of this portion of the program, the colonies produced by between 500 and 700 queens will have been studied and evaluated as potential sources of new queen lines for the breeding and selection program in the next 5 to 8 years.

Because of the continuing flow of new queens from Russia into the program and our selection within and between the existing queen lines, we will be able to both apply strong selection for resistance to V. jacobsoni and still be able to maintain good genetic diversity within the overall stock.  The main criterion for selection will be resistance to V. jacobsoni.  However, resistance to Acarapis woodi (tracheal mites), honey production, and the presence of chalkbrood in colonies will also be considered when we make selections of the parents of future generations.  Because of these aspects of the program, the ARS Russian honey bee stock will be different from year to year.  We expect that the most noticeable difference will be a slow, steady increase in the expression of desirable traits.

In the first year of the release program (2000), those who obtained production queens were getting Russian queens that produced hybrid colonies.  Because of the genetic nature of honey bees, the Russian queens of the first year produced hybrid worker bees, but also produced Russian drones. These drones will be available for matings the second year (2001).  During the first year, it was recommended that beekeepers (both queen breeders and those that bought production queens) produce or obtain enough hybrid Russian colonies to produce the drones needed for the second year to produce "pure" Russian matings.  Queen breeders will need the Russian drones to produce Russian queens that will foster "pure" Russian colonies.  General beekeepers who had hybrid colonies the first year will have a supply of Russian drones that will mate with any Russian supersedure or other queens that may be produced in their apiaries.  They will thereby assure that their apiaries with ARS Russian stock will remain Russian.

It was not possible for the laboratory to test all of the various hybrids that were produced in the spring of 2000.  We expect that at least some of these hybrids would be quite desirable.  In such instances, queen breeders might consider organizing at least some of their program to continue to offer queens that will produce hybrid colonies.  However, our best prediction is that there will probably be large variations between different types of hybrids, but generally, that they will be within the usual range for commercial honey bees in the United States, which also are highly varied.

Each year, the program will release queens that are sufficiently unrelated to the prior year's queens that inbreeding will be avoided.  Of course, people are welcome to organize their own breeding and selection programs that include Russian honey bees.  Indeed, we encourage breeders to include some ARS Russian honey bee parentage into their own programs in order to enhance resistance to V. jacobsoni in their own stocks of honey bees.  However, attempting to produce ARS Russian honey bee stock by making crosses other than those recommended by the program may result in inbreeding problems.  Also, such stock will not have the advantages to be derived from the ongoing selection program.