The Role of Precision Agriculture in Sugarcane Production

Welcome Dr. Johnson to Under the Microscope.

RJ – Sugarcane is a tropical crop that has been grown in Louisiana for over 200 years. This is somewhat remarkable considering that Louisiana has a temperate climate and is one of the northernmost sugarcane growing areas in the world. Although Louisiana does usually have sufficient rainfall, sunshine, and temperatures to produce a good crop, the growing season is much shorter than most other regions in the world due to freezing temperatures that may occur in the winter. This has required sugarcane researchers to look for ways to help this tropical crop adapt to its new growing environment.

UM – What has ARS contributed to the sugarcane industry in Louisiana?

RJ – Much of the success that has been achieved in producing sugarcane in Louisiana can be attributed to the combined efforts of the USDA/ARS, Sugarcane Research Unit, Louisiana State University, and the American Sugarcane League. This partnership was started in the 1920s and is still going strong. Together, we have developed sugarcane varieties that are adapted to the conditions found in Louisiana. These varieties produce sugar in a much shorter time frame than tropical varieties and can also withstand the colder winter temperatures.

In addition, other ARS scientists at the Sugarcane Research Unit have conducted research in the areas of cultural practices, disease, insect, weed control, and soil management to help ensure that the sugarcane produced in Louisiana can continue to thrive in the somewhat unusual environment of Louisiana. 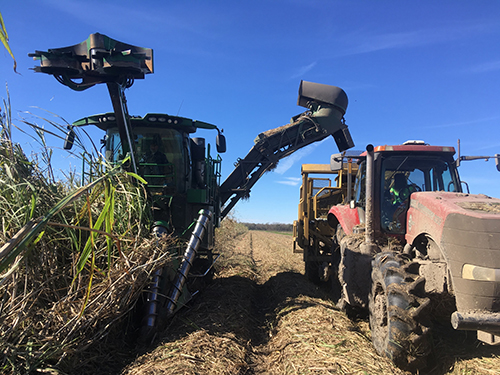 UM – What makes sugarcane an interesting (and challenging) crop to work with, compared to some other more conventional crops?

RJ – Sugarcane is a perennial crop that is planted once and then repeatedly harvested over a period of 4-6 years before it is replanted after a fallow period, which may last from 9 to 10 months. The perennial nature of the crop and the extended fallow period beRJeen crop cycles lead to soil and nutrient effects that "carry-over" beRJeen crop years and even beRJeen successive crop cycles. Nutrient requirements and accumulation also differ beRJeen the first harvested crop (plant-cane) and successive harvested crops (ratoons), with older ratoons generally requiring higher nutrient levels. Also, because the crop is not plowed each year, controlling weeds, insects, and disease becomes more challenging. Finally, because it is a perennial crop, conducting research with sugarcane is a year-round job with no "down-time" that usually occurs with annual crops. We apply fertilizer in the spring, collect growth measurements throughout the summer, and harvest the crops beginning in late September and continuing through December (Figure 1). In the winter we soil sample and then the cycle starts again.

UM – What are some of the other production challenges that sugarcane growers face? How do you and your team help growers overcome these challenges?

RJ – Although there are many challenges that sugarcane producers in Louisiana face, RJo come to mind as having the greatest effect on production practices in recent times. The first is the difficulty that many growers have in obtaining labor and the second is the high cost of crop inputs, particularly fertilizer.

We can help growers address both challenges through our research in precision agriculture. Precision agricultural uses technology to help growers "do-more-with less." In the case of sugarcane, it allows one person to do the work of several by utilizing technology such as GPS, variable-rate fertilizer application, remote sensing, and yield monitoring. ARS scientists have helped to demonstrate the value of this technology by conducting on-farm research to evaluate these technologies as they have become available. 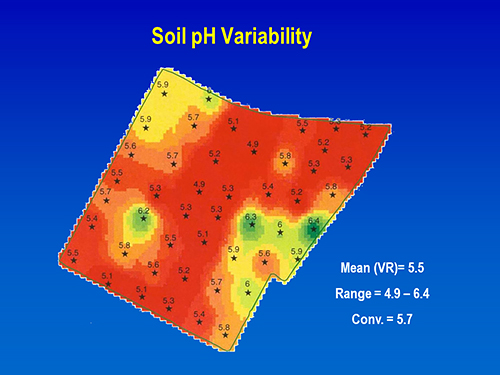 Most agricultural fields exhibit variability in their nutrient requirements and also in soil pH which helps determine the amount of lime to apply (Figure 2). Photo courtesy of ARS's Sugarcane Research Unit.

UM – How is your work with precision tech helping sugarcane growers?

RJ – One of the first projects that we worked with in precision agriculture was the variable-rate application of lime to sugarcane fields. Lime is used in sugarcane production to correct acid soil conditions. In acid soils, the availability of many plant nutrients is decreased and may affect plant growth and yields. Traditionally, soil sampling was conducted on a field basis where one sample was taken from each field. The amount of lime required was determined from this single sample and a uniform rate was applied to the entire field.

Our research showed that by utilizing grid-sampling (where multiple samples are taken from each field in a uniform grid pattern) or zone-sampling (where multiple samples are taken from each field based on similar soil types or properties), the total amount of lime applied could be significantly decreased. This is because most agricultural fields exhibit variability in their nutrient requirements and also in soil pH which helps determine the amount of lime to apply (Figure 2). By utilizing precision soil sampling, we were able to develop variable-rate application maps that put the right amount of lime in the right area. This ultimately resulted in a decrease in the overall amount of lime applied, which saved the growers money (Figure 3).

We have utilized the same approach to develop variable-rate application strategies for nitrogen and potassium, which has helped our growers reduce the total amount of fertilizer applied and helped them deal with the high cost of these inputs. 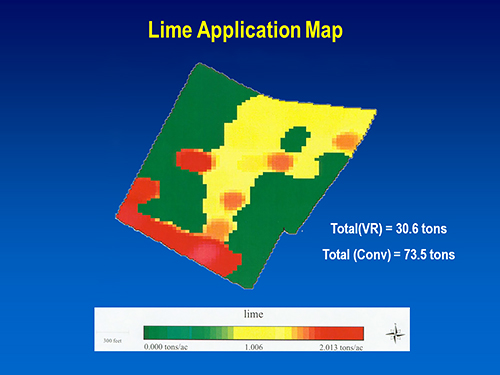 UM – What are the greatest challenges you face in dealing with these new technologies and integrating them with more traditional farming techniques?

RJ – The main challenge that has slowed the adoption of these new precision agricultural techniques by sugarcane farmers is the lack of a functional yield monitor for sugarcane harvesters. Yield monitors have proven to be very valuable tools for other crops because they allow growers to see the inherent variability in their crops. This has helped them realize the importance of technologies such as variable-rate application of nutrients. Sugarcane growers did not have this technology available so were somewhat reluctant to adopt these new precision technologies. We were able to use other field mapping techniques to document the variability in sugarcane fields and this helped to start the adaption of this technology. In addition, ARS scientists have conducted numerous trials evaluating yield monitoring systems and have helped speed their development and adoption.  Now that yield monitors are available the adoption of precision technologies has become more widespread.

UM – What do you predict for the future of sugarcane?

RJ – The future of sugarcane production in Louisiana is bright and I believe the industry will continue to grow. In the last several years, the acreage dedicated to the production of sugarcane has increased and the production areas have expanded out of their traditional boundaries. Farmers have continued to adopt new technologies and production methods that will help them grow an abundant, profitable crop that will help to ensure that adequate supplies of sugar are available to U.S. consumers. — by Georgia Jiang, ARS Office of Communications.