Flower Power: Attracting Natural Enemies of Pests to Your Field and Garden

Welcome Dr. Brennan to Under the Microscope:

UM – You have a rather novel alternative approach to control insect pests like aphids in lettuce without using pesticides, called conservation biological control. Please explain:

UM – How does this method benefit farmers and gardeners in both short term and long term?

EB – Great question. In both the short and long term this can help us reduce our use of pesticides, which is a good thing.  In the long term this can also reduce the ability of the insects to develop resistance to pesticides. When we overuse pesticides, insects can become resistant to them, which makes those pesticides useless in the long run. The cool thing about biological control is that pests don't usually become resistant to attacks by their natural enemies.  For example, I don't know of any situations where aphids have been able to evolve a way to consistently avoid being gobbled up by the larvae hungry hoverflies. 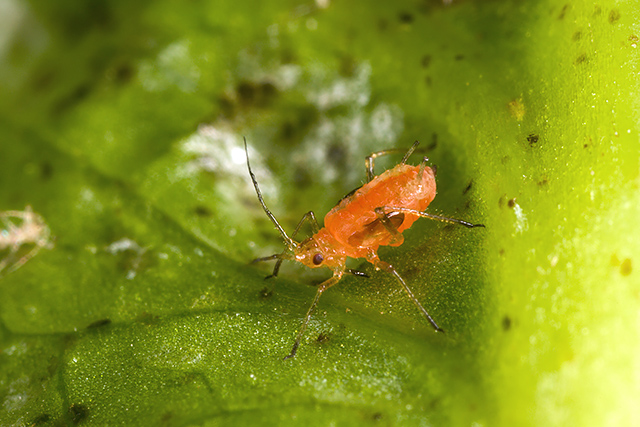 Lettuce aphid, Nasonovia ribisnigri. This pest (about 1-3 millimeters long) of lettuce appeared in California's Salinas Valley in 1998 and is now found in all lettuce-production areas of that state and Arizona. (Stephen Ausmus, D689-7)

UM – I understand you've done extensive work on using the plant sweet alyssum as part of this strategy. What are the advantages of planting alyssum in your field/garden, and what crop does it protect best?

EB – The great thing about this plant is that it flowers continuously. And those flowers are providing pollen and nectar that are a food source for adult hoverflies, which are a natural enemy of aphids. When the hoverflies have this food in our lettuce fields, they're able to go about doing what they do best in searching out all those aphids and help to control them without us having to use pesticides.  This is a system that works really well in lots of vegetables as well as some other crops. Lettuce is probably the best example in the region where I work, Salinas, which is often called the salad bowl of the world.

UM – It sounds like farmers in this region were already planting alyssum in lettuce, but you found that they were using more field space than was needed, thus limiting their potential crop acreage?

EB – That's right.  My research figured out a new method of planting alyssum in the lettuce fields so farmers didn't have to give up any field area just for the alyssum.  Essentially, my method involved adding about 500 alyssum plants per acre in between regularly spaced lettuce plants, which was really a win-win for farmers because they still got to plant a full field of lettuce and were still effective in controlling the aphids. 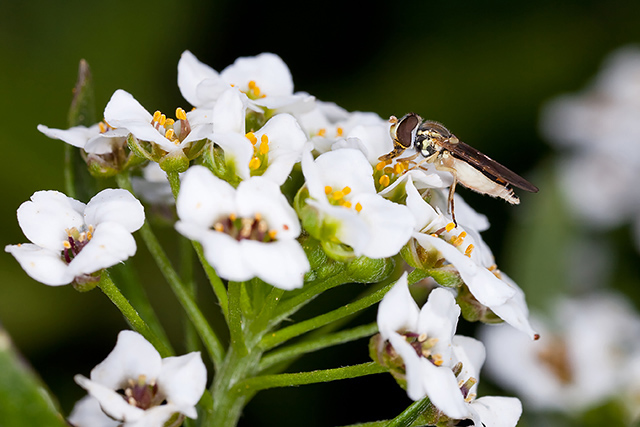 An adult hoverfly on an alyssum flowerhead. Hoverflies are a natural enemy of aphids that can infest lettuce, and the flies are attracted to fields by alyssum interplanted with the lettuce. (Stephen Ausmus, D3051-2)

UM – Alyssum is good for planting lettuce, but you've had mixed results planting with broccoli and other vegetables, why?

EB – The aphids that infest broccoli and lettuce are different species. The aphid that goes on broccoli is commonly called the cabbage aphid and it's generally a lot more challenging to control biologically than the several aphid species that get on lettuce.  I haven't seen a lot of scientific literature explaining exactly why the cabbage aphid is more difficult to control biologically, but there are likely lots of factors.  For example, broccoli has to grow for more time in the field before we're able to harvest it and so the aphids have more of a chance to cause problems on broccoli than on lettuce. Also, there are differences in the harvested part of the lettuce plant versus the harvested part of broccoli that make the aphids on broccoli challenging. With broccoli you're producing a flower, and with lettuce you're just producing a head full of leaves. The broccoli flower has lots of little crevices where aphids can hide and eventually deform the broccoli flower that we eat.

UM – How do farmers know which insects are beneficial and which are enemies of pests in their fields?

UM – I understand you're also researching the use of cover crops and compost for improved soil health, carbon sequestration, weed control, and other benefits. What are your findings?

EB – I love cover crops and have been working with them for much longer than I've worked on beneficial insects. So, as you can imagine I could go on for a long time about the different things that we've discovered with cover crops. One of the most important recent findings is that frequent cover cropping is extremely important for maintaining soil health in vegetable systems.  In fact, our research suggests that it's far more important than using compost.  Interestingly, these cover crops can also help us conserve some of those beneficial insects that I was just talking about with aphid control. 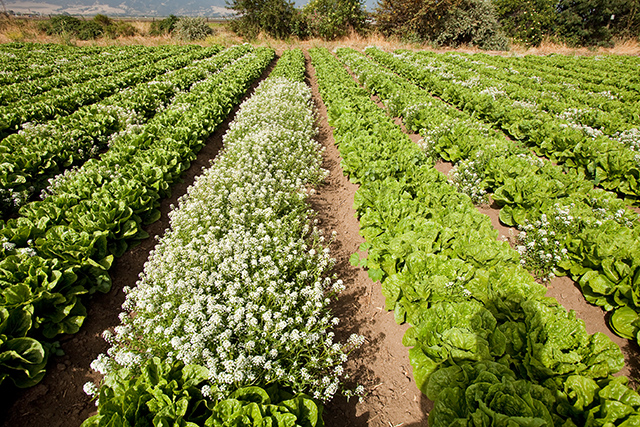 UM – We're right in the middle of gardening season. What advice do you have for home gardeners who are trying to keep pests out of their gardens?

EB – Probably the most important advice is to pay attention to what's going on in your garden. When you see something, be it an insect or some other organism, try to figure out what it's doing and why it's there. Perhaps it's a harmless thing, but it also might be a beneficial organism or a pest. Here's an example from my home garden. I recently learned that paper wasps were helping to control caterpillar pests on my kale that I had growing in my front yard. I figured that out when I was harvesting kale one day and a wasp landed on some kale that I was holding and grabbed a caterpillar larvae and flew off with it. Wow, that was cool.

UM – What about weeds? How can gardeners control weeds in their gardens?

EB – Great question. Probably the most important thing is to pull weeds as soon as you seen them to prevent them from setting seeds in your garden. Eventually you'll deplete what we call the weed seed bank in the soil. If you don't have weed seed in your soil, you won't have weeds. In my home garden and in my research fields we work to control weeds when they are young and vulnerable and prevent them from producing seed.

UM – Okay, let's let the cat out of the bag. You are a successful YouTuber, with your own YouTubeYouTube channel and dozens of videos, mainly focusing on topics we discussed today. Your video on making an inexpensive hoe for gardening has over 150k views. My favorite is the video comparing cover cropping to juggling. Please elaborate.

EB – Ha. I figured you'd ask about this. My first video was created in 2013 and describes my alyssum research that we talked about earlier.  It now has around 19k views and gets about 100 views per week.  That's impact.  I became a scientist to help farmers produce food sustainably and efficiently, and YouTube allows me to communicate this in an efficient and fun way (i.e., juggling).  Farmers and others love YouTube because it allows them to learn things when it's convenient for them.  And I love it because it allows me to share my results to a broad audience with visuals that help to tell the story behind the research.  One of my favorite recent videos is "Bamboo, Oil and Ice Cream.  Why scientists need to be on YouTube."  I'm hooked on video and will use it for the remainder of my career to share the research that I'm privileged do on behalf of the American public.