Biofueling Our Future with Agriculture

Welcome Dr. Stoklosa to Under the Microscope.

UM: What are the environmental benefits of biofuels?

RS: The primary environmental benefit is the reduction of fossil fuels used as an energy source. This allows industries and certain sectors of the economy to become "carbon-neutral" in terms of emissions released.

However, food crops can also provide additional sources of biomass post-harvest. The remaining stalks and leaves following corn harvest, which are referred to as corn stover, can be collected and processed to generate biofuels. In this way, we can use agricultural waste to generate a higher value product — a renewable biofuel.

UM: Can we produce enough biofuels to replace or significantly reduce our reliance on fossil fuel energy?

RS: It's possible for the U.S. to significantly reduce the amount of fossil fuels we use in various sectors, ranging from energy to transportation.  A report known as the "Billion Ton Study" was developed by governmental agencies and other outside experts to determine how much biomass can be grown in the United States and how this biomass can displace fossil energy utilization.

One promising result found that the U.S. could produce roughly a billion tons of biomass (roughly 1,042 million dry tons) by 2030. This amount of biomass could theoretically displace 9.5% of fossil energy that is consumed, along with avoiding 446 million tons of carbon dioxide equivalent emissions, annually. This modeled scenario can be reached by improving the logistics and infrastructure in the current bioeconomy to support growing, harvesting, transporting, and converting of biomass. These improvements to the bioeconomy infrastructure can also improve the rural economic output in the U.S. and create over one million jobs by 2030. 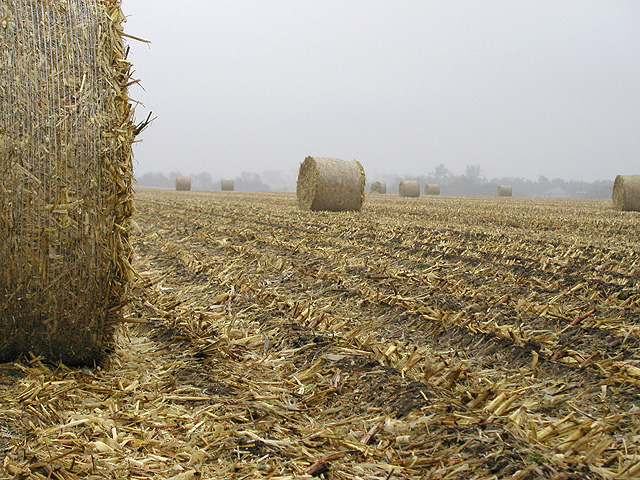 Bales of corn stover (stalks, leaves, husks, and cobs) in a field in York, NE, after harvest. Corn stover and other harvest leftovers such as wheat straw or perennial grasses such as switchgrass are promising biomass crops for conversion to biofuels. (Photo by Wally Wilhelm, D816-1)

UM: What is the difference between first-generation biofuels and the 'advanced biofuels' that you and your team develop?

"Advanced biofuels" (also referred to as second-generation biofuels) are liquid transportation fuels generated from plant biomass such as perennial grasses, trees, or agricultural waste residues. There are several benefits for using this type of plant biomass to produce "advanced biofuels" over grain crops. For instance, plant biomass in the form of perennial grasses can be grown on marginal land and will not compete with land used for food production. We can also take an agricultural waste residue such as corn stover and increase the value of this waste product by utilizing it for biofuels production. This can incentivize farmers to directly participate in the biofuels industry by allowing them to turn a waste product into an additional source of revenue.

UM: What are hydrocarbons? How are they related to the production of environmentally sustainable energy sources?

RS: A "hydrocarbon" is a chemical compound consisting of carbon and hydrogen. The gasoline put into vehicles is a form of a hydrocarbon that is produced from petroleum. Similar hydrocarbons are utilized as fuel in the aviation industry. These same hydrocarbons for liquid transportation fuel applications can also be generated from plant biomass.

Our research is investigating processes that take agricultural waste residues such as corn stover to generate a "bio-jet fuel." We do this research by combining fermentation with chemical processing to generate the hydrocarbons. We first break down the plant cell wall in the corn stover to release sugars. The sugars are then sent to a fermentation process to produce a chemical intermediate compound. This compound is then recovered and subjected to chemical upgrading to produce a hydrocarbon which has the same chemical and fuel properties as jet fuel currently derived from petroleum. 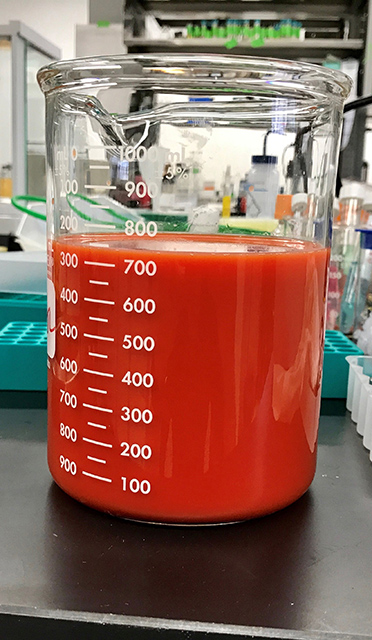 A sample of cultivated Phaffia rhodozyma using fermented sugars from a biomass crop; the color of the yeast is due to the organism's production of astaxanthin, a red pigment.(Photo by Ryan Stoklosa)

UM: Why would the U.S. want to use its biomass resources for fuel?

Additionally, the biomass conversion industry offers the U.S. an opportunity to create new jobs in mostly rural areas. This job creation can boost local economies and hopefully attract more services to improve the quality of life in these areas. Also, this industry can achieve a longstanding goal in the U.S. to be more energy independent. By relying less on imported fossil energy sources, the U.S. can develop a homegrown commercialized industry to supply its needs for liquid transportation fuels.

UM: You and your team also develop 'co-products' — please explain what those are and how they can help biofuel production.

RS: In a broad sense, "co-products" are additional chemicals that can be generated from either unutilized plant biomass or waste during the production of a biofuel. These co-products can improve the overall process economics for biofuel production as they are an added source of revenue. A co-product can also ensure that all components of the plant biomass are not wasted and instead are biochemically converted to a product of higher value.

For example, our team has performed research on generating a chemical called astaxanthin.  Astaxanthin is a type of carotenoid, which is a red pigment that is naturally produced by plants, algae, and fungi. In this case, we used the yeast strain Phaffia rhodozyma that naturally produces astaxanthin during fermentation. This carotenoid has high value as it is can be utilized as a nutrient supplement in aquaculture feed. It is primarily used to supplement the diet of farm-raised salmon. 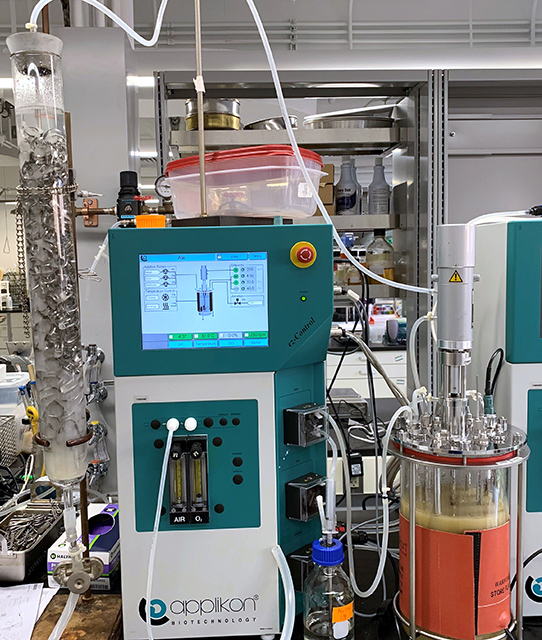 UM: What are the challenges to producing biofuels, and how are those challenges being met?

MA: There are still many challenges to producing biofuels from agricultural crops, especially those involving logistics and process economics. On the logistics end, transportation of the harvested crop can be cost prohibitive because of the low density of the biomass. One way to solve this problem is by densifying the biomass, which can be done by taking loosely ground biomass and making either a briquette or a pellet from the material. With this new form, the biomass has a higher density and will minimize supply chain costs associated with transportation.

On the process economics side, the production of biofuels such as ethanol still suffer from small profit margins. This is partly due to the capital cost requirements of developing a scaled-up process and using costly specialty inputs such as enzymes needed to release fermentable sugars from the plant cell wall. Profit margins can be improved if additional value-added co-products are generated alongside a biofuel.

UM: What do you see as the future for alternative energy sources?

RS: Generating liquid transportation fuels and other chemicals from biomass to reduce petroleum use is only one route to achieving more environmental sustainability. Additionally, the production of more electrified vehicles can further complement emissions reductions in the transportation sector.

However, other sources of alternative energy can potentially be applied to multiple sectors of the economy aside from transportation. Other efforts should focus on non-carbon resources for electricity production in the power sector. Wind and solar electricity generation, although promising, are still growing industries that need time to mature before they are widely adopted. – by Georgia Jiang, ARS Office of Communications.