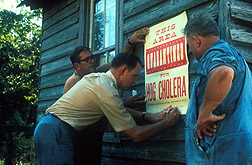 Farms with hog cholera were quarantined. 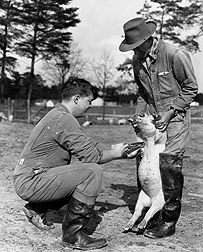 USDA scientists have long played a role in developing vaccines for hog cholera. 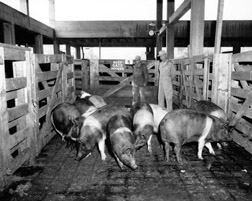 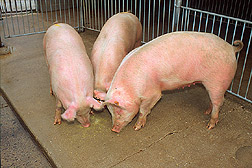 Today's hogs are healthier than ever.

History of Research at the U.S. Department of Agriculture and Agricultural Research Service
Eradicating Hog Cholera

In the early years of this century [the 1900s], hog cholera "often swept through the countryside, causing devastating losses. During the fall months, looking across the prairies of the Middle West, one could often see smoke ascending from perhaps a half-dozen farms where pigs dead of cholera were being burned," USDA veterinarian C.N. McBryde recalled later...

On January 31, 1978, Secretary Bob Bergland declared the United States hog cholera free in ceremonies in Washington, D.C. This was 99 years after USDA began hog cholera research and 17 years after the start of a Federal-State eradication campaign.

Whether hog cholera originated in America or Europe is not definitely established, but most experts believe it to be native to this country. Cholera was first reported in the United States in 1833 in southern Ohio. By 1893, 90 separate areas of infection were known to exist. Outbreaks in 1886, 1887, and 1896 each killed more than 13 percent of the Nation's hogs; more than 10 percent died during the 19l3 outbreak. The disease was still costing producers $50 million a year in the early 1960's.

A key research discovery leading to control and eventual eradication of hog cholera was made in l903. Marion Dorset of USDA's Bureau of Animal Industry (BAI) demonstrated that hog cholera is caused by an ultramicroscopic virus, and hogs recovered from the disease are immune for life.

Almost 20 years earlier, Department scientists thought they had identified a bacterium resembling the one responsible for typhoid fever as the cause of hog cholera. But when Dr. Dorset tested a serum from that bacterium during an 1897 outbreak in Iowa, injected hogs still died of cholera. He therefore questioned prevailing scientific opinion, and about 6 years later proved that hog cholera is a virus disease.

The first practical preventive measure, injection of anti-hog-cholera serum and then the virus, was successfully tested in 1907 by the BAI Field Station near Ames, site of many later advances in hog cholera research. Dr. Dorset, Dr. McBryde, and W.B. Niles found that serum from the blood of immune hogs conferred immunity lasting only a few weeks to other hogs. But injection of the BAI hyperimmune serum plus injection of virus gave lifelong protection against hog cholera to most hogs.

A system of swine sanitation named for McLean County, Ill., where BAI developed it in 1927, became a valuable adjunct in immunization against cholera by this method. The system, developed primarily to prevent roundworm infestation of hogs, also reduced incidence of filth-borne intestinal diseases. Serious side effects were produced when hogs with even low-level intestinal infections were immunized against hog cholera.

Department scientists realized that a control method involving use of the live virus offered no hope for eradicating hog cholera. So they began work toward a protective vaccine made with killed virus. Research of Drs. Dorset and McBryde, and C.G. Cole at Ames culminated in the development of the crystal violet killed vaccine in 1935. An initial problem of contaminants in the vaccine was overcome when F.W. Tilley patented a procedure 10 years later for preparing a consistently sterile crystal violet vaccine.

Scientists long sought reasons why this and later improved vaccines did not confer immunity to some hogs. The problem was partly solved in 1949 with the discovery of a variant of the hog cholera virus. Antiserum against both types of virus was needed for protection.

Researchers in Iowa meanwhile had learned much about the transmission and persistence of the hog cholera virus. They found that the virus is present in the circulating blood of the sick animal and also in the various secretions and excretions. The virus remained active throughout the winter in carcasses of cholera-infected hogs buried in the fall, and unburied carcasses of infected pigs remained infectious for 11 weeks during cold weather.

Contrary to popular belief at one time, pigeons did not prove to be carriers of hog cholera virus, although transmission by crows and buzzards was not ruled out. Extensive experiments at Ames demonstrated conclusively that the house fly and stable fly are capable of transferring the cholera virus from sick to well pigs. Prevalence of biting flies and incidence of hog cholera correlated closely during the years of the study.

After Dr. J.A. Baker, Cornell University veterinarian, developed a modified live virus vaccine for hog cholera in 1951, producers faced a dilemma. The live-virus vaccine gave more effective protection but was a potential source of new infections. Killed-virus vaccines offered a chance for eradication of hog cholera but did not give as high a level of protection.

In 1963—2 years after eradication was mandated by law—Agricultural Research Service (ARS) regulatory officials prohibited interstate shipment of virulent virus or of feeder pigs and breeding stock vaccinated with this virus. Modified live vaccine and killed vaccines continued in use until banned in 1969. Animal disease regulatory activities were transferred to USDA's Animal and Plant Health Inspection Service in 1971.

The 1961 decision to eradicate hog cholera came during large-scale field tests conducted by ARS in Florida, Iowa, and Georgia.

The ARS Hog Cholera Research Station at Live Oak, Fla., tested modified live-virus vaccines and anti-hog-cholera serum on about 60,000 swine on 1,500 Florida farms. ARS veterinary medical officer M.R. Zinober in 1959 reported that 92.2 percent of the pigs and 89 percent of the vaccinated herds were adequately protected.

In a 5-year Iowa farm study, ARS veterinary medical officer J.P. Torrey reported adequate protection for most of 67,558 pigs that received a single injection of killed hog cholera vaccine 2 weeks before weaning. Two vaccinations, 2 weeks after weaning and a month later, overcame the inability of some pigs to develop immunity. No cholera outbreaks took place on 60 farms cooperating in the study completed in 1963.

No cases of hog cholera were confirmed during a 3-year eradication test begun in 1961 in Lowndes County, Ga. Ninety-seven percent of the hogs in the county received two vaccinations during a 2-month period. ARS scientists said results of these experiments confirmed that killed-virus vaccines are safe and effective.

As late as the early 1960's, the procedure for diagnosing hog cholera was expensive and sometimes required several weeks to complete. Blood from the suspect animal was injected into one free of the disease, it was observed for clinical signs, and an attempt was made to recover hog cholera virus. The marked disadvantages of the test precluded its use in a nationwide eradication program.

In 1963 ARS veterinary medical researchers W.L. Mengeling, E.C. Pirtle, and J.P. Torrey reported a rapid, accurate diagnostic test for hog cholera that takes less than a day. In the test developed at the National Animal Disease Center, Ames, Iowa, a culture containing tissue from a suspect hog is treated with fluorescent dye that is in combination with anti-hog-cholera serum. Infected cells retain the dye-serum and are readily distinguished from noninfected cells under a microscope.

Dr. Torrey and W. C. Amtower found that sodium-o-phenylphenate, a material used for disinfecting hospitals, was effective and safe for disinfecting farms, trucks, sale barns, and packing houses where hog cholera virus may be present.

Another study by Dr. J. K. Prather indicated that heating infected blood or serum to 69· C. and holding this temperature for 30 minutes destroys hog cholera virus—and therefore would destroy the virus in heat-processed meat. Department scientists had earlier found that the virus survives dry-salt or brine curing of hams taken from cholera-infected hogs.

Hog cholera was the most devastating disease of swine in this country for more than a century. Containment and eventual eradication required research-based information on the cause and transmission of the disease as well as methods for diagnosis and prevention. And total eradication was achieved through close cooperation of scientists, Federal and State regulatory agencies, producers, and affected industrial groups.––W.W.M.

"Eradicating Hog Cholera" was published in the March 1978 issue of Agricultural Research magazine.