Fungi and Bacteria Team Up with Carrots for Better Health

Together with Dr. Lori Hoagland of Purdue University, Simon and his team have identified 13 specific genera of fungi and bacteria that live inside plants — collectively called endophytes — that can latch onto carrots and fight disease or even promote the carrots' growth.

The findings are significant, as carrots are the sixth most-consumed fresh vegetable in the United States and represent the largest market share of all crops in the organic sector. In 2020, U.S. domestic production totaled approximately 3.4 billion pounds. Simon and Hoagland's findings represent an important step in keeping that crop healthy.

"When properly 'paired' with these endophytic microbes, carrots were able to better tolerate stress induced by Alternaria leaf blight, a disease caused by the fungus Alternaria dauci," explained Simon. "Alternaria leaf blight is a destructive and costly carrot pathogen that can spread rapidly if not controlled, so any protection from it can have huge implications for growers. Traditionally, chemical fungicides, herbicides, and pesticides were used to address A. Dauci, but with endophytes, we are making use of allies that occur naturally." 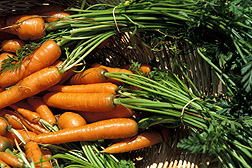 After reviewing over 30 different commercial varieties and breeding lines, they observed that the genetic makeup of certain carrot varieties made them particularly receptive to bonding with endophytes. They also found that crop management tactics focused on building better soils — particularly by adding organic materials — improved the carrot-endophyte relationship.

"Although this research is still a work in progress, we see that utilizing these microbial allies to fight against carrot diseases like Alternaria leaf blight is entirely plausible," said Simon. "Studies of other crops have shown that plant-associated microbes can promote overall growth by helping to increase nutrient availability for plants."

Now, it appears, carrots can also benefit from that kind of healthy microbial alliance. By Georgia Jiang, ARS Office of Communications