App May Help Save Milk Money and the Environment

Dairy farmers now have a new technology from the Agricultural Research Service (ARS) that may become one of their key tools to reduce expenses and limit pollution.

Kevin Panke-Buisse, a research microbiologist at ARS's U.S. Dairy Forage Research Center in Madison, WI, is developing a mobile device app that measures milk urea nitrogen (MUN). MUN is a compound in milk that can be analyzed to determine how effectively dairy cattle are processing the protein in their feed.

There are currently no precise, convenient on-farm tests available, so farmers often send samples to labs for analysis.

Panke-Buisse first got interested in developing a test for MUN after attending a seminar about the importance of data-driven decisions in the dairy industry and how production efficiency and environmental sustainability go hand-in-hand. "One data point to illustrate this connection is MUN," he said. "Protein is one of the costliest components in the diet of a high-performance dairy animal and MUN gives us an estimate of how effectively that protein is being used." 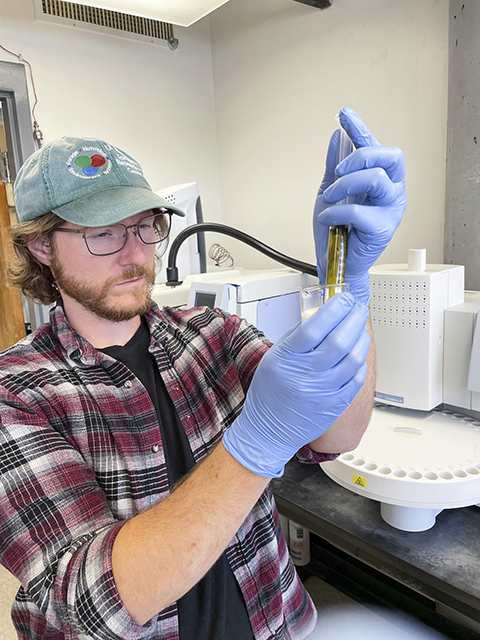 "Dairy rations are a complex balance of nutrients designed to support the performance of dairy animals in much the same way that elite human athletes must craft their diets to perform their best," he said.

Panke-Buisse's app is a rugged device designed for the rigors of life on a dairy farm. The app allows farmers to input data that is readily available at the dairy farm and receive an indication of MUN value in real time.

In addition to helping dairy farmers get the highest performance for the best price, the app can help the environment by reducing the release of polluting nutrients into the environment. 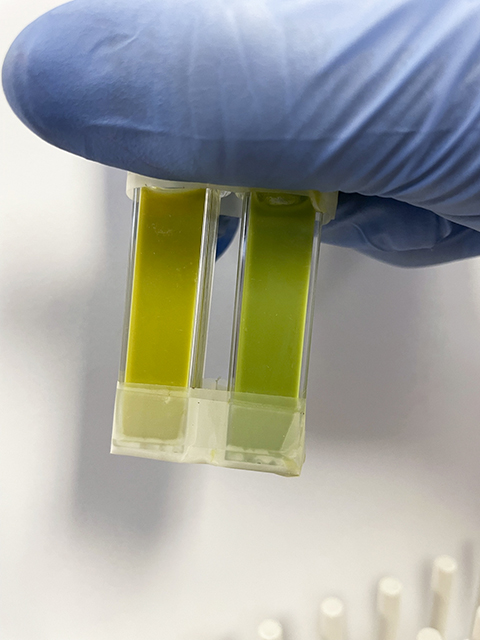 A close-up view of the two-chamber vial with the solutions of milk, indicator dye, and a urease enzyme. The app takes a picture of the vials, calculates the color differences, and provides the MUN value. (Photo by Jon Bleier, D4680-1)

MUN is a nitrogen-containing compound. When it leaves the cow's body in urine, it eventually ends up as ammonia in the environment. Ammonia can degrade air quality, act as a fertilizer in surface waters, and pollute ground water.

Panke-Buisse expects this first-generation MUN app to expand and grow in utility. "The constant development of technology means that there are always new methods and means of obtaining data to improve decision making," he said.

"Having real-time data on MUN can help producers maximize performance, profit, and sustainability," Panke-Buisse said. "In a dairy context, with the cost of high-protein feeds, too much MUN is essentially like watching your money evaporate and damage the surrounding environment on which your livelihood relies." – By Scott Elliott, ARS Office of Communications.