Handheld Device for Assessing Plant Health - This innovation is a handheld device to be used in the field for early detection of Huanglongbing, or citrus greening disease, which is spread by an insect present in most citrus-producing areas of the US. - Cheryl Armstrong, Joseph Capabianco, Yongping Duan, Wan Shih, Wei-Heng Shih

April 2, 2020 - We had an outstanding response to the ARSX2020 challenge on Disruptive Species with 69 completed applications. Proposals are currently being reviewed, and 10 finalists will be announced the week of April 6, 2020. Finalists will participate in the ARSX2020 Hackathon on May 27, 2020. During this virtual event, finalists will be afforded the opportunity to further develop their ideas and pitch their proposals to a panel of judges, who will determine the ultimate winner or winners.

Disruptive pests and pathogens are a major threat to biosecurity, adversely impacting agricultural yields, the economic stability of both producers and consumers, natural resources, and human health. In the United States alone, invasive species cause damages and losses to agricultural and native ecosystems valued at over $120 billion per year. Crop and forest production losses account for a third of that cost. In many cases, a changing climate exacerbates the problem, creating new conditions in which invasive species may thrive and spread. 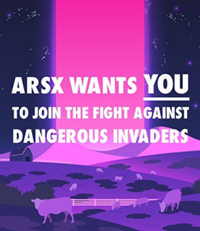 The ARSX2020 Competition will award up to $100,000 in prize money for one or more proposals that address disruptive agricultural or livestock pests and pathogens in an innovative manner with potential for scalable results. Successful proposals will demonstrate the potential to predict, prevent, detect, control, and/or eliminate disruptive pests over a large geographical scale, over a large timescale, and/or with significant economic benefits.

Proposals fall within one of four thematic areas:

Up to three finalist proposals will receive awards.

Applications were accepted and reviewed up until February 2020. Scoring was primarily based on a proposal's potential impact and the novelty of its approach. Project feasibility was also assessed but ARSX2020 encouraged new and big ideas, even in early stages. Each proposal was evaluated by multiple independent reviewers in a transparent, double-blind process, and all submissions will receive feedback.

The initial review identified 10 finalists. Those teams are invited to participate in the inaugural ARSX2020 Hackathon. The Hackathon will create space to refine and iterate on initial proposals with the additional input of relevant subject-matter experts and pitch coaches. Finalists will then pitch their innovations to a panel of judges and an audience of their colleagues and peers.

The expertise of ARS scientists has the potential to solve big problems for the American farming community. With an emphasis on creativity, ARSX2020 is designed to harness that potential. 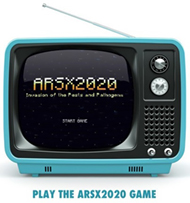 Check out our ARSX2020 game* that our creative design team partners put together.