Welcome Dr. Clark to Under the Microscope:

UM – Recently, it seems like there's been an uptick in larger and more uncontrollable wildfires in this country, especially in the western United States.  What's causing this increase?

PC – In terms of rangelands, particularly in the Intermountain West, the number of large and severe wildfires has risen due to the increasing presence and dominance of weedy and highly flammable grasses such as cheatgrass, medusahead, and red brome. All three of these species are introduced annual grasses which mature, die, and dry out in mid to late spring; by summertime, these grasses have turned some rangelands into tinderboxes.

Once a wildfire gets started, from natural or human causes, the flammability and connectivity of these grass fuels contribute to extreme fire behavior, which makes it difficult and dangerous for wildland firefighters to contain and control the wildfire.  When these fuels are combined with very hot, dry, and windy fire weather conditions it is a recipe for the mega-fires that have made headline news all too often.

UM – Is this increase a natural phenomenon or is it due to human activity?

PC – The answer to that question is more complex than it might seem.

Cheatgrass, medusahead, and red brome are native to Eurasia and the Mediterranean region and were introduced to the U.S. in the late 1800s by human activity (e.g., shipping of contaminated grain, packing materials, or ballast).  Those introductions essentially light the fuse to what has been called an "explosion in slow motion."  The invasion and increasing dominance of these introduced grasses have increased the flammability of rangelands, and thus have drastically shortened the fire-return interval compared to pre-settlement times and non-invaded rangelands in this region.

That said, many rangeland fires are started by lightning, a natural ignition source.  The Murphy Complex fire (Idaho/Nevada), Long Draw fire (Oregon), Milford Flat Fire (Utah), and Soda fire (Idaho/Oregon) are megafires, which burned from about 280,000 to more than 650,000 acres – and all were ignited by lightning.

However, most wildfires – regardless of size – are caused by humans.

UM – How did these invasive plants become so pervasive, and why are they so significant in starting wildfires?

PC – Cheatgrass and other invasive annual grasses I have mentioned became so pervasive because they were pre-adapted to conditions in the Intermountain West when they originally arrived here in the late 19th century.  Since then, these invasives have established a presence throughout the United States.  In fact, cheatgrass now grows in nearly every state and province of North America.  They are also fire-adapted, meaning that they thrive, reproduce, and die all before the summertime wildfire season starts.

This adaption, as well as their other competitive advantages as invasive species, allows cheatgrass and similar grasses to dominate over native vegetation. 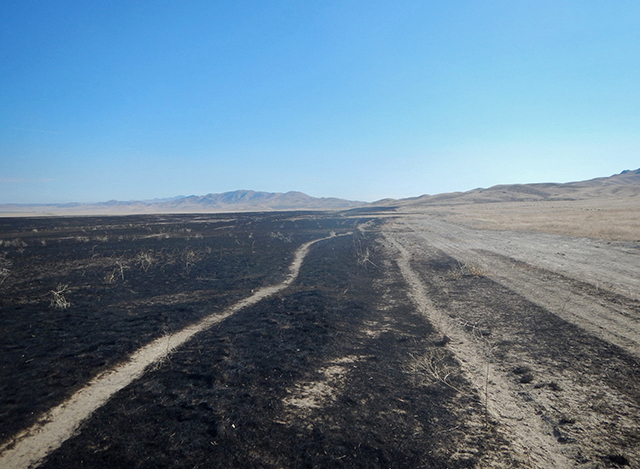 Cheatgrass and other invasive grasses now play a big role in wildfire ignition and megafire development because they form highly flammable and well-connected fuel loads, which are far more fire-prone than fuel loads occurring on non-invaded, native rangelands.  This disturbance relationship sets up an annual grass-wildfire cycle that progressively shortens the interval between wildfires while also promoting larger and more severe wildfires.

UM – I understand your group is evaluating some collaborative approaches to wildfire mitigation, including trying to reduce the excessive damage from wildfires from occurring in the first place. Please elaborate on these methods.

PC – Yes, ARS researchers here in Boise are working together with beef cattle ranchers and the USDI-Bureau of Land Management (BLM) at sites throughout the Intermountain West to evaluate the effectiveness of using targeted cattle grazing to create fuel breaks, or gaps, in fire-prone landscapes.

The purpose of these targeted grazing applications is to create long, linear, fuel breaks between highly flammable, annual grass-dominated rangelands and critical resource areas (such as wildland-urban interface and crucial habitat for sage-grouse and other wildlife), which are at high risk for wildfire damage. 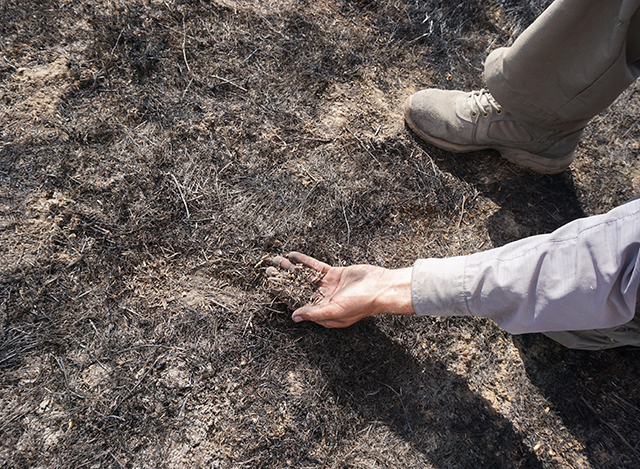 Fuel breaks can potentially modify fire behavior, slow the rate of fire spread, and provide safer positions from which wildland firefighters can contain and limit wildfire size and impact.

We are assessing how well targeted cattle grazing reduces grass fuel heights, loading, and connectivity – all of which will potentially moderate fire behavior.  Additionally, we are evaluating whether intensive cattle use within fuel breaks impacts environmental health.  This research is being conducted in a large experiment involving project sites in Idaho, Nevada, and Oregon with additional sites to be added in Utah, Wyoming, and/or Washington state. 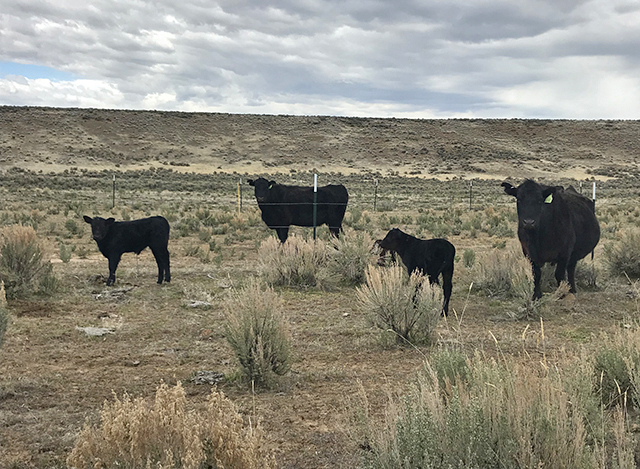 UM – Do you see target-grazing as an applicable technique to deal with other ecological problems as well?

PC – Other forms of targeted grazing – or prescribed grazing – do have potential as tools to help promote the restoration of disturbed lands, including those dominated by cheatgrass or other introduced annual grasses.

Currently, I'm cooperating with the BLM and cattle ranchers in southwest Idaho on a different project that involves evaluating the efficacy of intensive spring + fall cattle grazing as a means to suppress cheatgrass and promote the recovery of desirable perennial plant species.  Ecological recovery is typically a slow process, particularly on severely degraded landscapes, but our preliminary results are encouraging.

UM – Target-grazing as a method of wildfire mitigation is a relatively new scientific theory. What are some of the shortcomings or limitations you will have to overcome in order for target-grazing to become a more widely used measure against wildfires?

PC – Targeted cattle grazing requires considerable flexibility from the cattle rancher and – if public lands are involved – the BLM or other natural-resource management agencies.  These invasive grass species have a relatively narrow window within which they are palatable to cattle.  The timing and duration of that palatability window vary from year to year and are difficult to predict.  For example, cattle may need to start grazing in late FPCruary one year, but early May the next. 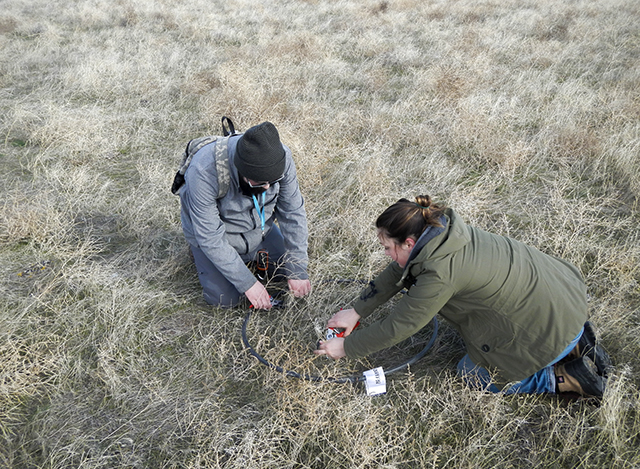 Furthermore, an initial application of targeted grazing might successfully reduce grass fuel height, load, and connectivity. However, if late-spring rain occurs and promotes new grass growth, then the rancher would need to return with his cattle to apply another round of targeted grazing to recreate and maintain fuel reduction in the fuel break up to the start of the fire season.

Having the flexibility to handle these contingencies is key, but also quite challenging for both ranchers and resource managers.

UM – Are there any ecological or environmental benefits to wildfires? If there are benefits, how do we achieve a balance between allowing wildfires to burn and protecting lands and life?

PC – Wildfire has probably always played a role as a disturbance agent in nearly all terrestrial ecosystems on Earth. The cycling of nutrients, plant succession, and other ecological processes are dependent on periodic disturbances, and cyclic wildfire is one source of those disturbances. However, cheatgrass and other flammable invasives have severely altered the rate of wildfire cycling within Intermountain rangeland ecosystems.

Consequently, the solution to the question of suppressing or letting wildfires burn is very elusive.  Wildfire management for these impacted rangelands is complex, challenging, and requires a great deal more research attention. – by Georgia Jiang, ARS Office of Communications.