Water Wisdom: Farmers Must Prepare for a Drier Future

Welcome Dr. Tsegaye to Under the Microscope.

UM: What is the outlook for water availability for farmers? Are there variations by region?

TT: It varies by region even though most of the nation is currently in some stage of drought. Regions in which water resources are most dependent on aquifer withdrawals will suffer more in the long term if those aquifers are not recharged, which is the case in the High Plains (Ogallala) aquifer region of the Plains states and to lesser extents in the California Central Valley and Mississippi Delta.

Climate change models forecast declining precipitation in the southern and central tiers of states and increasing precipitation in the northern tier of states; but that long-term trend, while somewhat evident even now, is shadowed by El Nino-La Nina cycles. Generally, water availability decline in the western states will be more serious because there is simply less buffer in the hydrologic system, while in the eastern states the decline will be confused by the increase in larger precipitation events that tend to favor runoff into the river system rather than aquifer recharge and effective rainfall for crop growth.

UM: How is water availability related to water quality?

TT: Poor water quality limits water availability. For example, excessive nitrogen and phosphorus entering the Chesapeake Bay, Lake Erie, or the Gulf Coast results in eutrophication and limited availability of water suited for supporting healthy populations of oysters and blue crab that fishermen rely on. Nutrient loss in runoff from agricultural fields is a significant source of nitrogen and phosphorus, so it is incumbent on farmers to reduce those losses to help protect water quality downstream.

TT: There has been a very steady shift in practices.

The most important water conservation practice has been the adoption of no-till or limited till farming, which keeps residues on the soil surface and reduces evaporative losses while promoting infiltration of precipitation, both during and outside of the growing season. Ancillary practices that improve crop water productivity are the increasingly common adoption of variable rate fertilization and planting systems. 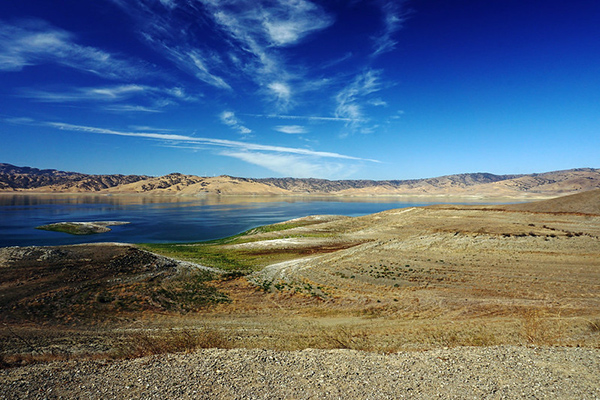 In addition, irrigation systems have changed from largely inefficient and wasteful surface irrigation using gravity flow and earthen distribution ditches to pressurized irrigation systems that currently serve more than 67% of the nation's irrigated lands. Pressurized systems eliminate the conveyance losses suffered in earthen ditches and open canals; and most pressurized systems are center pivot sprinklers that uniformly distribute water and reduce the amount required to sufficiently irrigate an entire field. As a result, there has been a 24% decline in the average amount of water applied in irrigation since 1950, while irrigated land and crop yield per acre have both increased greatly. Micro-irrigation systems, which are even more efficient than center pivots, now serve more than 8% of U.S. irrigated lands compared with zero in 1975. Variable rate sprinkler irrigation, which delivers less water to areas where less is needed, has evolved to become precision irrigation, where water application is determined by crop need as measured by remotely sensed crop moisture stress.

UM: Could techniques being pioneered in regions such as the Southwest, like wastewater recycling, be applied more widely?

TT: Yes, in fact the use of wastewater for supplemental irrigation in rainfed systems could help reduce the effects of short-term dry spells. Currently we are using crop growth models and the weather data to discover when supplemental irrigation would help, and how much yield could be recovered using this technique. The next step is to determine what infrastructure would be needed and if it is economically feasible.

UM: How do tillage practices affect water usage? Are there variations in how useful these practices are across regions, climates and other variables?

TT: No-tillage and minimum-tillage are practices that improve soil structure and allow formation of pore spaces and vertical cracks that allow for more rapid movement of water from the surface to the root zone, thereby reducing water loss by runoff and evaporation. Soil type is the greatest variable affecting improvements resulting from these practices, but the frequency of wetting and drying cycles and freeze-thaw cycles also play a role in how well these practices work in different regions.

In general, conservation tillage (any practice that results in less soil disturbance) tends to increase infiltration and water availability. 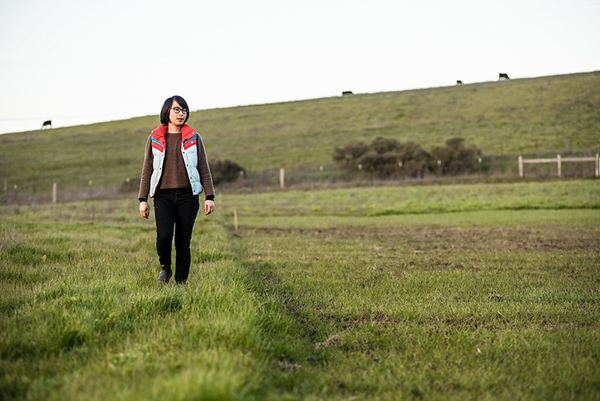 UM: What more can farmers do to conserve water?

TT: Even with better uniformity of irrigation with pressurized systems, there are still within-field variations in soil type, aspect, slope, and topographic position that lead to different crop water availability and growth. The adoption of site-specific variable rate irrigation (VRI) practices is key to further increasing the crop water productivity – the amount of economic yield per unit of water used. All center pivot systems sold in the nation offer some level of VRI control, but most farmers do not yet use those capabilities. Research has shown that crop water productivity can be substantially increased, and water-saving deficit irrigation practices made less risky if VRI control based on plant and soil sensing is adopted. Combining VRI practices with variable rate fertilizer application already practiced by many producers can further increase the productivity of both water and nutrient resources. Overall, farmers need to be open to adopting these new tools.

Being willing to switch to growing different crops may be especially difficult, but may also be one of the best solutions for conserving water in the future.

UM: How does water management interact with breeding of more drought-tolerant crops?

TT: We constantly use the latest in "drought tolerant" and "drought resistant" hybrids and varieties in our irrigation trials. There have been incremental improvements in these characters, particularly in terms of stronger root systems that more thoroughly explore the soil for water. The most substantial improvements have been in breeding that improves yield, pest resistance, and cold tolerance within a crop species, which also impact drought and water management within the production system. An example is higher-yielding, more pest-resistant sorghum. Because sorghum is naturally more drought tolerant than corn, this improves the outcomes for sorghum production, which requires less irrigation than does corn. Another example is cotton varieties that are more cold-tolerant. These varieties have seen adoption in the northern Texas Panhandle and southwestern Kansas, which is important because cotton can be grown with acceptable yield with much less irrigation than is required by corn.

UM: What about managed aquifer recharge? How does that work, and what role can it play? What are the challenges?

TT: MAR is the capture and storage of excess surface water into aquifers during a wet period for subsequent recovery during periods of drought or for environmental benefit. It is an important tool to mitigate the adverse effects of droughts, floods, and changing climatic conditions. Potential challenges to successful MAR in agricultural settings include limited surface water supplies, identifying optimum locations for recharge, and potential negative impacts on crop health and groundwater quality. 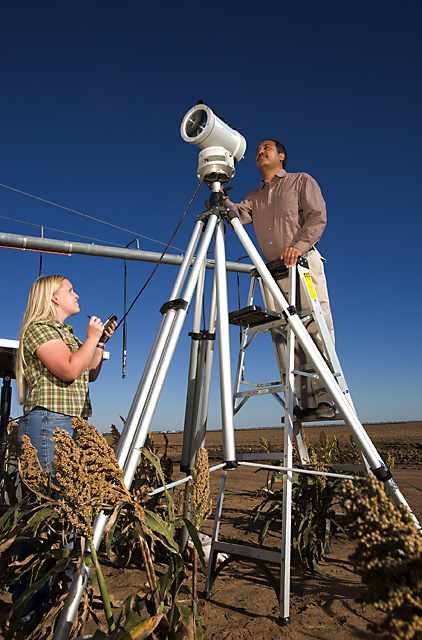 Agricultural engineer Prasanna Gowda (on ladder) and hydrologic technician Kim Bush determine the water loss from a field by measuring the sensible heat flux with a large-aperture scintillometer. Their research efforts are part of ongoing studies to preserve one of the world's largest aquifers, the Ogallala, which serves eight states in the Great Plains of the United States. (Photo by Peggy Greb, D1093-1)

UM: What other issues are significant for future water availability, and how is ARS approaching them?

TT: There are several issues and new approaches that ARS is taking to meet emerging challenges to water availability. Prior ARS research has often focused on the field, catchment, and small watershed, but has not dealt with basin-wide hydrology, water flows from mountains to rivers systems and aquifers, water withdrawals, and aquifer recharge on a basin scale. Now, ARS has a multi-location managed aquifer recharge (MAR) research program to understand more thoroughly and deeply the basin water balance, expected future water resources, and effects of new agricultural water use practices. ARS is also looking to increase water supply by finding alternative sources, such as wastewater, drainage water, saline waters, etc. Salinity poses a threat, however, because it leads to overall, long-term reduction in productivity. Salt cannot be broken down any further and needs to be transported to salt sinks. The only sustainable salt sink is the ocean, any other salt sink is a location where crop will eventually become unsustainable. ARS is working to find solutions to treat water for the acute water quality issues and sustainable management strategies for the chronic issues related to salinity. From a climate change perspective, there is also a shift in the amount and timing of precipitation events. ARS is conducting research on how to harvest and store that water and make it available at later dates in the growing season to meet crop needs.

Continued crop improvement through genetics will also play an important role. A lot of work has already been done on drought-stress tolerance, but improved root architecture that maximizes water capture in the root zone holds tremendous promise. Finally, as climate changes and the demand for water intensifies, it will be critical to provide research allowing prioritization of "water-appropriate" agricultural production. Why are people growing high water-use crops in places that are severely water-limited? Increasing drought and water scarcity means we need to consider where certain crops are grown just as much as how. The Regionalization Project within the LTAR network is developing data-driven conceptual models that can provide the foundation for research addressing water-appropriate zones for production. – by Kathryn Markham, ARS Office of Communications.