Using Ancient Apples to Improve the Future of Apple Breeding

Welcome Dr. Artlip to Under the Microscope:

UM — What are ancient apples and how do they differ from wild apples?

TA — Ancient apples are really just old or antique apple varieties that are no longer grown commercially. Sometimes, these older apples fell out of favor because newer varieties held more appeal to consumers due to appearance, taste, sweet/tart balance or mealiness.

Wild apples, as we define them, are really different species of apples, some of which are actually the ancestor(s) of modern varieties.

UM — Where did the idea of looking into wild apple genes come from?

TA — Plant breeders often look to wild or ancestor species or locally cultivated plants as sources of resistance to diseases or harsh environmental conditions that modern varieties don't have. In many cases, the genes for such resistance was bred out as a consequence of favoring desirable traits such as flavor, appearance, or some other trait. Potato is a great example. Wild potatoes found in the Andes are usually small and bitter; the bitterness is a sign that insects won't eat them or of disease resistance. Now potato breeders are trying to reintroduce those types of qualities into modern varieties because of evolving insect and disease pressures. 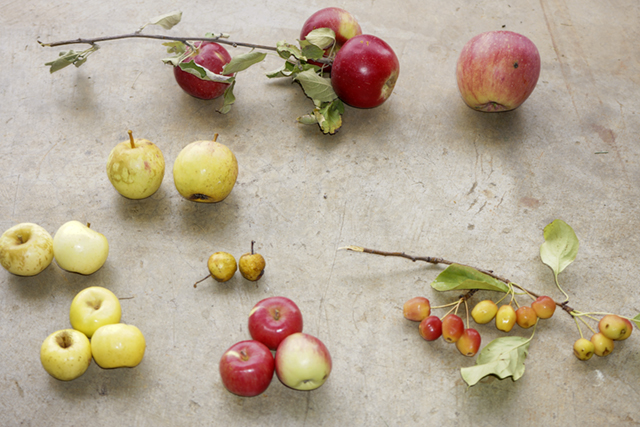 UM — What are the differences between ancient or wild apples and the commercial apples we find in grocery stores?

TA — Wild apples tend to have small fruits on the order of crab apples, so they're generally not suitable for consumers. They may not have the appearance or flavor qualities that consumers prefer. A similar situation exists for many old or antique apple varieties that have fallen out of favor. They may be small. They may look "ugly" even under the best growing conditions. They may not keep well in common storage or their flavors and mouthfeel (mealiness) may not be suitable either.

UM — Are there certain types of wild apples that breeders look for and use?

TA — Yes! The main ancestor of modern apples grows throughout central Asia in countries like Kazakhstan in a variety of local conditions, ranging from rather arid to high altitude to having high disease pressure. Other apple species have specific disease resistance or traits that modern apples generally lack

UM — Are ancient or wild apples good for picking and eating, or just breeding?

TA — It depends. Some of the wild apples have fruit that approach commercial size and are edible. Many of the old or antique varieties are very tasty. For example, "Ashmead's Kernel" was a dessert variety that George Washington would have served to his guests at Mount Vernon. There are also old or antique varieties that were specially bred for cider making that are inedible. With the resurgence in hard cider production, these varieties are especially prized for making a beverage as complex as a quality wine.

UM — What traits do apple researchers and growers specifically breed for?

TA — Besides all the fruit qualities that I've mentioned, resistance to diseases, insect pests, and harsh environmental conditions (high/low temperature, too much/too little water) are very important. Growers also look for "friendly" trees that bear fruit within 2 or 3 years after planting, are productive, aren't biennial (more bloom and fruit on alternate years) or self-thin (too many apples end up being too small, so growers have to chemically or mechanically reduce bloom or very young fruit), growth habit (branching, height) and how well the trees take to modern growing practices. 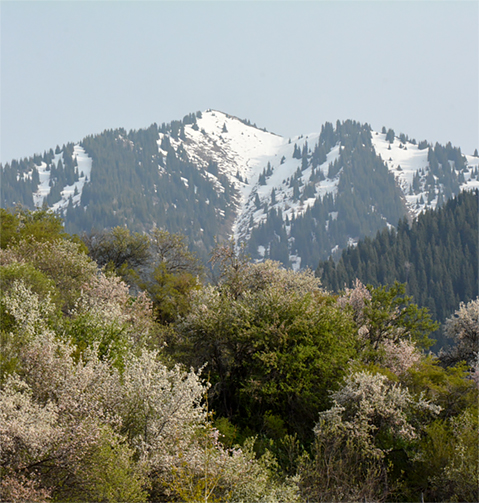 Forests of wild Malus sierversii in the mountains of Kazakhstan. (Photo courtesy of Dr. Gayle Volk)

UM — How have advancements in technology and genetic sequencing helped apple breeders?

TA — Genetic sequencing has given us a fairly complete accounting of the genome ("instruction manual") for apples. Moreover, this knowledge along with standard breeding techniques allows us to know what genes are responsible for fruit quality traits such as skin color, sweet/tart balance, and mealiness. Now, breeders can make crosses, isolate DNA from young leaves of offspring, and quickly know whether the seedling will have some/most/all of the desirable traits.

This genomic knowledge has been coupled with "rapid cycle breeding," where we use a modified variety that blooms within a year after planting and continues to bloom throughout the year in a greenhouse. The cycle can be repeated, reducing the time for creating a consumer and grower desired variety from 15 or 20 years down to 5. This also allows us to respond more quickly to evolving disease, insect, and environmental pressures by breeding better adapted varieties that have the fruit qualities that consumers want.

UM — What challenges are there to using wild apples to cultivate new ones?

TA — As I mentioned with the potato examples, they may have desirable traits, but undesirable traits frequently end up in offspring as well. This requires multiple rounds of breeding to keep what is wanted and discard the rejects.

Years and years of breeding coupled with many acres and the expense of maintaining the trees is not a good economic model. By combining the genetic sequencing and "rapid cycle breeding," we can introduce those traits we want into commercial varieties much more quickly, with reduced time, land, and inputs. 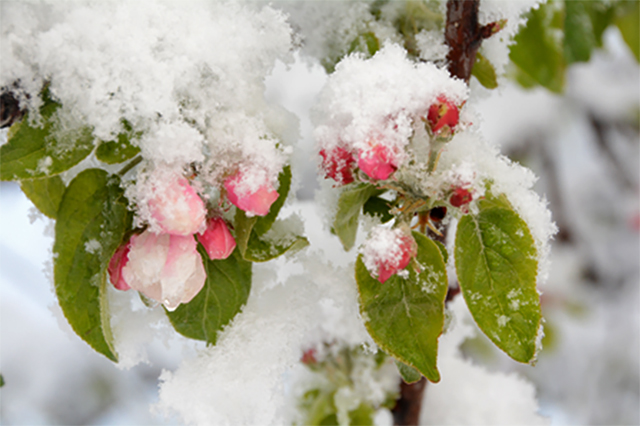 These wild apples are tough enough to survive erratic conditions like spring snows. This makes them valuable for breeding. (Photo courtesy of Dr. Gayle Volk)

UM — How will breeding traits from wild apples into new apple cultivars benefit growers and consumers?

TA — Consumers have shown a preference for fewer inputs, such as pesticides. Wild apples may have resistance to diseases and pests, thus reducing the need for pesticides. Our group, along with national and international collaborators, recently was able to introduce resistance from wild apples to a disease called Blue Mold that afflicts apples after harvesting. This should reduce fruit losses that can frustrate growers, grocery stores, and consumers. Such efforts are underway with resistance to other diseases as well.

UM — You have mentioned that you and your team have studied how apple trees respond to low temperatures in spring and winter. Is it possible for us to develop an apple variety that will have increased resilience against stresses brought about by climate change?

Secondly, we frequently see warm spells in late winter or early spring that fool trees into breaking bud or blooming, followed by frosts or visits by the polar vortex. This can result in dead flowers, thus reducing yield or even killing trees. By having the apple genome, scientists across the globe are gaining a better understanding of the interplay of genes involved in stress resistance and dormancy.

UM — What do you predict as the next step in apple breeding?

TA — I think the new genome editing tools, coupled with "rapid cycle breeding," will gain more acceptance and allow us to more quickly respond to changes or even anticipate them. It really is an exciting time in not only apples but plant breeding in general.