UM – How does this HPAI virus differ from other bird flu strains? Is it more virulent or deadly?

ARS – This HPAI virus is from a unique and specific lineage (A/goose/Guangdong/1996) that has shown to be carried by wild migratory waterfowl. Most avian influenza viruses are of low pathogenicity and only cause mild disease in chickens and turkeys, typically seen as respiratory signs or drops in egg production and accompanied by low death losses. The specific subtypes H5 and H7 are typically low pathogenic avian influenza (LPAI) but have been shown to have the potential to mutate to HPAI when introduced to chickens and turkeys. By contrast, this current HPAI virus is highly pathogenic directly from the wild birds and causes a very severe disease in chickens and turkeys where the virus grows and spreads throughout the body. HPAI affects many types of cells, tissues, and organs, causing death rates that may approach 100%.

UM – Why are some bird flu viruses more deadly for birds than others?

ARS – The HPAI viruses have a change in one of the proteins, the surface hemagglutinin, that allows the virus to grow in many cells in critical organs, like the heart, brain, adrenal glands, kidney, pancreas, and others. Therefore, the virus has a severe impact on vital organ functions. The hemagglutinin protein of LPAI viruses, in contrast, limits growth to only a few cell types such as cells that line the respiratory and intestinal tracts, thus minimizing the severity of disease. This small difference in the hemagglutinin protein has huge consequences in the disease it causes.

UM – Are there visual symptoms that can be spotted? If not, how are these strains being detected?

ARS – Be on the look-out for chickens that stop eating and drinking, or that stop laying eggs or die suddenly. Some chickens may have black discoloration of the comb and wattles because these tissues die from the virus growing in blood vessels and stopping blood flow. We call this necrosis. Some poultry, especially turkeys and ducks, may show nervous signs such as walking in circles, keeping their head held back, or having a twisted neck or feet paddling. Domestic ducks and wild bird species may or may not show signs of disease.

Chickens and turkeys that show clinical disease or reduced feed or water consumption should prompt the farmer to have the birds tested. Because the symptoms may also be caused by other diseases, diagnosis or detection of the HPAI viruses as the cause of disease is done by laboratory tests that identify the genetic material of the HPAI virus. 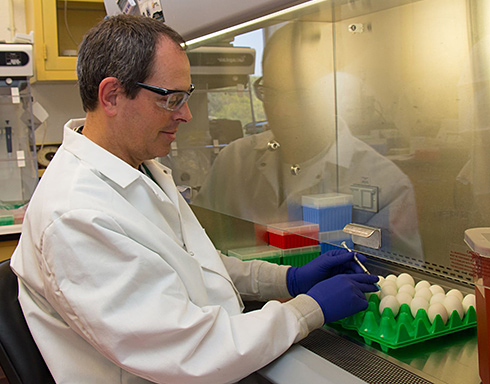 UM – What is being done to contain or manage spread of the virus? It must be a challenge because avian influenza viruses circulate freely in wild bird populations.

UM – What precautions should consumers, those with backyard chickens, commercial producers, and others who are around birds take to protect their birds and themselves? 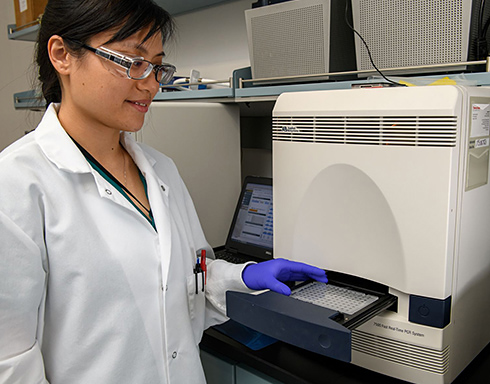 ARS postdoctoral researcher Christina Leyson running a quantitative RT-PCR assay, which is a genetic test that measures the amount of virus in a sample. (Photo courtesy of Southeast Poultry Research Laboratory)

UM – Do you anticipate the virus will start to dissipate once the weather warms?

ARS – The HPAI virus is susceptible to inactivation by heat and UV light exposure. As the weather warms and the sun shines, HPAI virus deposited in the environment will be more quickly inactivated, which reduces opportunities for the virus to spread. Warmer weather alone, however, will not stop the outbreak.

UM – Are certain birds more susceptible to HPAI, or does it affect all types of birds?

ARS – Avian influenza viruses as a broad group can infect a broad diversity of bird species, and individual viruses may demonstrate host adaptation such that infection and transmission is specific for certain bird species.

UM –  There has been at least one reported case of human infection. How does it transmit to humans and why is HPAI considered low risk to humans if transmission can occur? Are certain people more at risk?

ARS – According to the Centers for Disease Control and Prevention, "Recent Bird Flu Infections in U.S. Wild Birds and Poultry Pose a Low Risk to the Public." Please refer to the CDC guidance on human HPAI transmission. 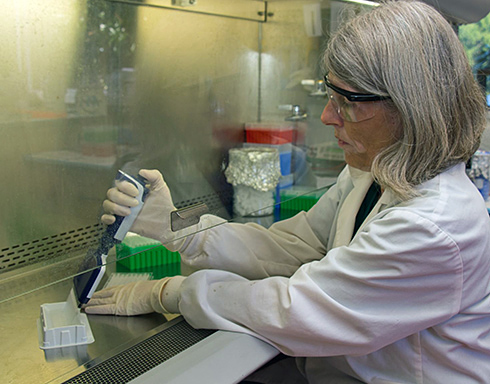 UM – Should consumers be concerned about the poultry they purchased, or plan on purchasing for consumption?

ARS – HPAI infected flocks are humanely depopulated. Their carcasses and eggs are disposed in an environmentally sound manner and do not go into the food chain. Backyard poultry can be raised safely if good biosecurity is maintained.

UM – ARS is conducting emergency research in response to the current HPAI outbreaks. What type of research is being conducted and what do you hope to accomplish?

ARS – We are studying the disease that the current HPAI virus causes in chickens and turkeys by examining how much virus is necessary to infect the birds, the clinical signs after virus infection, levels of virus excretion, and how easily it transmits to contact birds. This information can then be shared with poultry producers, veterinarians, and animal health officials for better understanding of the epidemiology, ways the virus can transmit, and when and what samples are the most adequate to take for virus diagnosis. Efforts to improve diagnostic tests that can specifically identify this HPAI variant is also being performed. Finally, we are evaluating what vaccines could potentially be used to help control the outbreak. 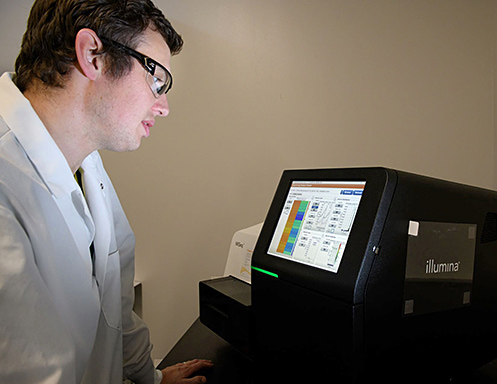 UM – How is APHIS monitoring HPAI and other bird flu viruses?

APHIS – The United States has the strongest avian influenza surveillance program in the world. Not only does APHIS monitor and test for the virus in commercial and backyard birds, but APHIS also conducts surveillance in wild migratory waterfowl in the North American flyways. Migratory waterfowl are the natural hosts for avian influenza viruses of low pathogenicity, and can carry viruses without the birds appearing sick.

With the recent detections of the Eurasian H5 strain of HPAI in wild birds and domestic poultry in the United States, bird owners should review their biosecurity practices and stay vigilant to protect poultry and pet birds from this disease. APHIS is working closely with State partners on surveillance, reporting, and control efforts.

Please see the resources below: