Welcome Dr. Wheeler to Under the Microscope:

UM – First of all, it might be surprising to some that NASA employs plant physiologists. How did you get into this field and get involved with NASA?

RW – I did my graduate work on gravitational biology of plants on a NASA grant to my academic advisor, then later did a post-doctoral associateship to study plants for life support applications, also on a NASA grant. This helped me connect with the NASA research efforts at Kennedy Space Center in the late 1980s.

UM – It may be equally surprising that NASA and ARS have collaborated on projects for decades. What are some successful endeavors from this partnership, and what are you working on with ARS currently?

RW – We collaborated with ARS researchers on light spectral effects on crops in the late '80s. We co-sponsored a meeting on optimizing plant productivity in 1991 and conducted food safety research with hydroponic crops in the mid-90s. A spaceflight experiment to look at nitrogen fixation in microgravity occurred in the mid-2000s. Testing with genetically modified dwarf plums as a candidate space crop happened in the 2014-2016 timeframe, to name a few. Current collaborations include research on microgreens as a food crop, use of beneficial fungi to promote plant growth, and use of hyperspectral sensing to monitor crop stress. 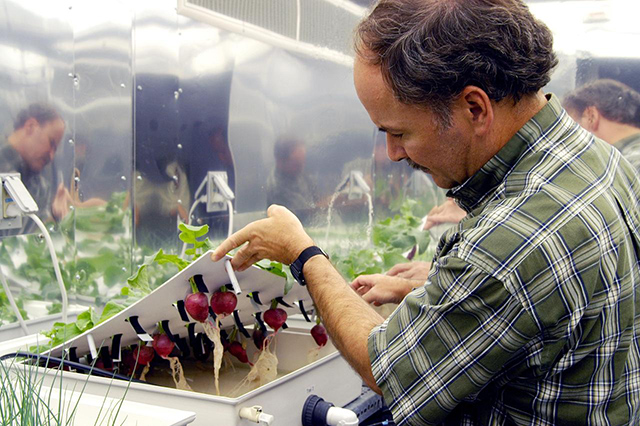 In a plant growth chamber in the KSC Space Life Sciences Lab, plant physiologist Ray Wheeler checks radishes being grown using hydroponic techniques. Wheeler and other colleagues are researching plant growth under different types of light, different CO2 concentrations and temperatures. The Lab is exploring various aspects of a bioregenerative life support system. Such research and technology development will be crucial to long-term habitation of space by humans. (Photo by NASA)

RW – I definitely do. In fact, it's already happening with U.S. and other astronauts on the International Space Station. I think this will continue to expand as mission durations and distances increase. I would hope that some of these future astronauts would be some of my current colleagues, but we are all collegial in the space exploration community.

UM – For space exploration, say over a year, how much space is available to grow/store food?

RW – As a community of crop researchers, I think we would all say the more space available the better, but we realize there will be constraints. We know with the two veggie units on the space station, we have about 0.3 m2 of growing area. I am personally hopeful that we can at least get this to about 0.5 m2 with a plant vegetable production system called OHALO that we plan to test on station. I think further increases may be possible in the future for a Mars mission. When we get to surface settings on the Moon and Mars, then we might be able to evolve to larger crop production systems as the mission infrastructure expands. We know that with high light intensity and optimized crop growth environments, 20-25 m2 of crops can produce enough oxygen for one person and perhaps about half of a person's dietary calories; having enough light and optimizing growth are key to achieving those goals, though. 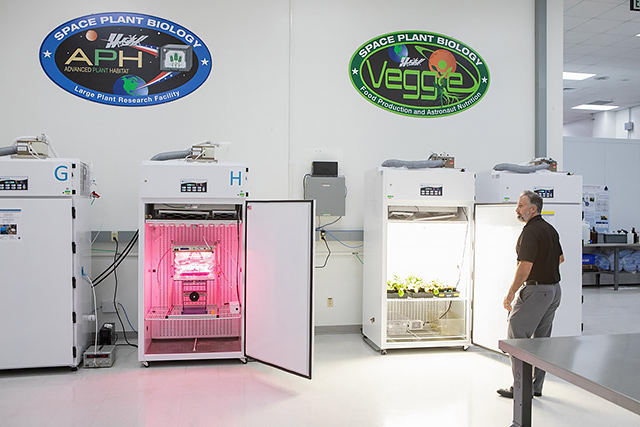 Ground unit experiment chambers for the Veggie plant growth system, at right, and the Advanced Plant Habitat, at left, are in view in a laboratory inside the Space Station Processing Facility (SSPF) at NASA's Kennedy Space Center in Florida, on May 16, 2019. (Photo by NASA/Kim Shiflett)

UM – What crops are ideal for growing in space, and why?

RW – Low growing (short) and high yielding crops would be top of the list. Also, a high harvest index (where a large percentage of the plant is eaten/used) is very desirable. The types of crops will vary depending on the mission. For early missions, like the space station, we focus mostly on leafy greens for supplemental food. For surface settings in the future with larger growing areas, many of the same field crops that sustain us on Earth would also be good—grains, legumes, and root/tuberous crops.

UM – Growing algae in space for consumption and oxygen has been explored since the 1950s. How has this research progressed, and is algae still a viable food source for space exploration?

RW – Algae research has been sort of up and down since the '60s. Algae and cyanobacteria (blue green algae) are certainly viable candidates for oxygen production. There are still challenges making them palatable and acceptable for food or as food supplements.

UM – Growing food in space has its challenges, including the risk of bringing along unwanted guests (pests). How do astronauts currently deal with tiny, maybe microscopic, hitchhikers?

RW – I think if we're careful in how we prepare our seed and crop propagation materials, we can screen out obvious pests like insects, but microbes like bacteria and fungi will be impossible to totally screen out since spacecraft with humans are not sterile. We can sanitize the seeds and other plant materials that we send to space to minimize or reduce the risks, but microbial pathogens might get aboard spacecraft through other avenues, and so it needs an Integrated Pest Management (IPM) approach. If you view this from an ecological perspective, the crops - just like humans - will have their own associated microbiome and if you maintain a diverse and healthy microbiome, this might be an effective way to reduce risks. For aggressive pathogens, the best measure is to prevent them from entering the spacecraft to begin with. 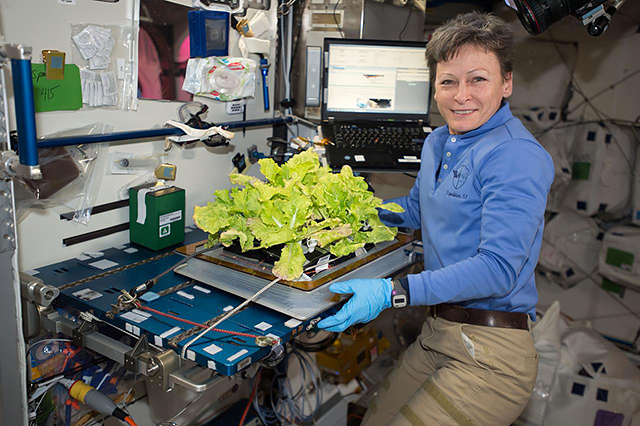 UM – Water will likely be an essential aspect of growing food in space. How can we ensure there's enough water on board for both consumption and growing food?

RW – Plants do indeed need water to grow, but this is essentially a "pass through" process where the plants transpire water. The humidity from transpired water is still inside the plant chamber or spacecraft, so it can be condensed, treated, and recycled either as clean water to the crew or recycled to the plants. Even the small amount of water going into the plant tissue will be conserved when the crew consumes the crops or the remaining biomass is dried. So, it is a challenge of "priming" the system with the water needed to begin the loop of plant growth and water recovery. This could be a big challenge for settings like Mars, where it is costly to haul a lot of water along, but we are all hopeful that we can find "in situ" reserves of water/ice in settings like the Martian surface.

UM – Is there suitable soil on the moon or Mars for growing plants?

RW – We don't know, but people have certainly wondered about this for a long time. If you can get the right particle size of the local soil (called regolith), it should work. Whether it can provide many nutrients is still in doubt. Essential nutrients like nitrogen are lacking in both lunar and Martian regolith, and so, use of the regolith would require supplemental fertilizers to get good growth.

UM – We talked about different challenges to growing sustainable, fresh food during space travel. What is the biggest challenge right now?

RW –  I think avoiding the build-up of any potential plant pathogens is important, just as on Earth. Also, being able to keep the system clean (for example, between plantings) and all the sensors and other components operating will also be important. We will likely have to grow multiple species in a common environment, and so finding out how to manage these without competing against one another will be important for sustainability. 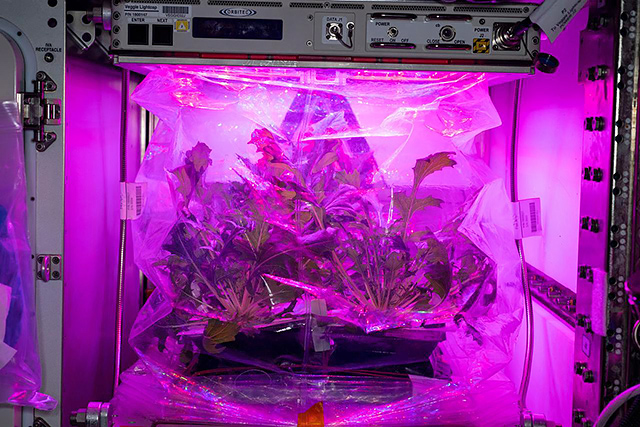 Mizuna Mustard mustard greens, part of the Veg-04A experiment, are shown growing in a Veggie plant growth chamber aboard the International Space Station on July 9, 2019. The Veg-04A experiment tested the greens, grown in blue-rich lighting and red-rich lighting, to determine the effects of different light ratios on plants grown in space on the station. (Photo by NASA)

UM – This research could have major implications for farming on Earth. Can you describe a couple space research projects that have proved beneficial at home?

RW – NASA research with crops in controlled environments on Earth has developed several concepts that now have wide terrestrial applications. For example, NASA research at the University of Wisconsin in 1990 tested and patented the concept of using Light Emitting Diodes (LEDs) for growing plants. We continued with this research at Kennedy Space Center in the 1990s through the 2000s. Now, LEDs are used around the world for controlled environment crop production.

Kennedy operated its Biomass Production Chamber from the late 1980s through 2000. This chamber used vertically stacked hydroponic shelves and light banks and was perhaps the first working example of a vertical farm in the world. Vertical farming is now widely used around the world. NASA did this because it was a "volume efficient" approach that would be needed for space. NASA tested field crops like wheat, soybeans, potatoes, rice, and sweet potatoes in controlled environments using hydroponic cultivation, like nutrient film technique or NFT, at Kennedy and aeroponics at the University of Wisconsin. NFT and aeroponics are now used by "seed" potato growers in different areas around the world to produce disease-free potato planting stock. The technology we've developed by living in space and exploring our solar system and universe returns benefits every day to people around the world.