Getting More Uses Out of The Vitamin-Packed Sweetpotato

Welcome Dr. Allan to Under the Microscope.

UM – What is the difference between sweetpotatoes and yams?

UM – Are sweetpotatoes related to potatoes?

MA: Sweetpotatoes are also not related to potatoes (Solanum tuberosum) despite the shared name. To help address this confusion, the National Sweetpotato Collaborators Group in 1989 endorsed the merging of the two words into one. Sweetpotatoes are true storage roots while potatoes are tubers which is a modified stem. Another major botanical difference is sweetpotato leaves are non-toxic, nutrient dense, and are commonly consumed in parts of the world, whereas potatoes are part of the night shade family and their leaves are toxic. Interestingly, a familiar close relative to sweetpotatoes is the vine weed morning glory.

MA: Orange-fleshed sweetpotatoes, the most common type consumed in the US, are packed with beta-carotene, which is a pigment with excellent antioxidant properties and pro-vitamin A activity. Vitamin A is an essential nutrient that is important for childhood development, the immune system, and our vision. Sweetpotatoes are rich in polyphenols, which are also compounds that possess antioxidant properties associated with health benefits.

Purple sweetpotatoes are especially rich in the polyphenol class called anthocyanins that give them their deep purple color and have been associated with a myriad of health-promoting effects (e.g., antioxidant, anti-inflammatory, slows starch digestion, helps regulate metabolic activities). Sweetpotatoes are also a good source of fiber.

UM – Some sweetpotatoes have orange flesh, while others have purplish or even white flesh.  Do they have different nutritional values?  Is one better than the others?

MA: It is challenging to say which type of sweetpotato is best because they are all healthy in their own ways. The biggest difference between flesh colors is the eating experience since they have varying textures, aromas, and sweetness levels that make each flesh color unique. One of my favorite ways to eat sweetpotatoes is to dice and bake orange and purple-fleshed sweetpotatoes in a medley – providing a contrast in appearance, texture, and taste as well as broadening the nutritional benefits.

UM – What sweetpotato attributes are you and your team looking to improve?

MA: We are looking into how the chemical make-up and food processing methods can improve the texture, taste, and aroma properties in baked sweetpotatoes, sweetpotato fries, and sweetpotato chips. Sweetpotato breeders have made great leaps in improving sweetpotato quality over the past 50 years but a better understanding of what makes a good table stock and processing sweetpotato is needed to further grow the US sweetpotato industry and develop novel sweetpotato products to increase consumer utilization of this healthy vegetable. 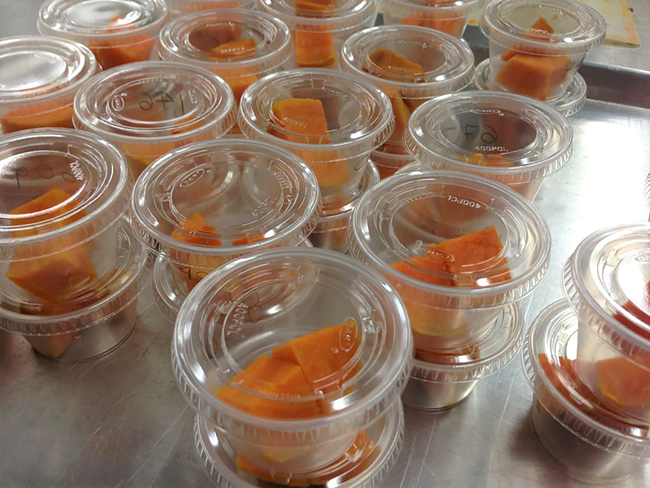 MA: From a grower's perspective, disease and pest resistance, high yields, shape that is similar to a potato (like a round soda can), a skin that sets well to minimize damage, and sweetpotatoes that store well are desirable traits. However, if the eating experience is poor and the consumer doesn't buy the product, these traits are irrelevant. Thus, it is vital for a commercially viable sweetpotato to have good agronomic traits and advantageous culinary qualities.

UM – How does cooking affect the nutritional value of the sweetpotato?

MA: Sweetpotatoes are a unique vegetable in that the starch degrading enzymes are greatly accelerated during the cooking processes.  These enzymes convert some of the starch into maltose and sweetens the sweetpotato as it bakes. This is why there is typically a syrup that leaks out onto the baking sheet.  Cooking may degrade some of the health promoting compounds, but the majority will remain. On the other hand, beta-carotene may become more bioavailable after cooking and bioavailability can be further increased when consumed with fat (e.g., sweetpotato fries). 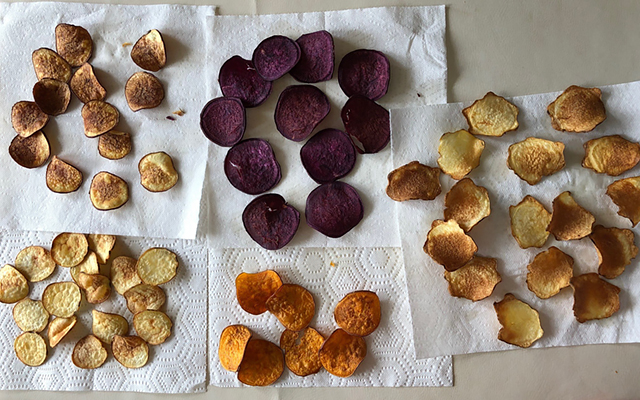 Chips made from different types of sweetpotatoes. (Photo by Matthew Allan)

UM – During the wheat shortages of WW1, USDA used sweetpotato flour to stretch wheat flour supplies. Can everyday consumers easily substitute sweetpotato flour into their diets? What are the benefits of doing so?

UM – Sweetpotatoes have a lot of merit in a nutritional context, but what are some of their non-culinary uses?

MA: Sweetpotatoes are a starchy root with some varieties being much higher than others and can be used similarly as other starchy crops for livestock feed or to make ethanol for biofuels or consumption (e.g., soju and vodka). There are also sweetpotato varieties that were bred for their foliage and used as ornamentals. These sweetpotato plants can be red, purple, or green with many different leaf shapes and can be found at your local plant nursery. – by Georgia Jiang, ARS Office of Communications.