Skip to main content
ARS Home » Office of Communications » UTM » Are Hybrid Potatoes in Your Future?

Are Hybrid Potatoes in Your Future?

Welcome Drs. Bethke and Jansky to Under the Microscope:

UM – What exactly are hybrid potatoes?

PB & SJ – There is a loose definition of "hybrid" and a specific one. In the general sense, a hybrid potato is a cross between two plants that are genetically different. Using that general definition, one could argue that potato breeders are creating hybrids in current, conventional breeding programs when they cross two varieties. However, we are using hybrid in the narrow plant-breeding sense. That is, a hybrid potato is a cross between two inbred potato lines. Since each inbred line is genetically homogeneous, all hybrid offspring of a cross are identical. This is distinctly different from conventional potato breeding where all offspring of a cross are different from each other.

It is also important to note that hybrids are produced through conventional breeding.  Genetic engineering techniques are not used.

UM – You mentioned "inbred potato lines" – the word 'inbred' usually has negative connotations. Why do you want to use inbred lines for potato breeding?

PB & SJ – That's a really good question. We know that mating between closely related individuals often results in offspring that have a genetic disorder. That's why we don't want to inbreed animals. Plant breeders, however, use inbreeding to selectively remove the DNA that causes genetic disorders. They identify the healthiest offspring and use only those for the next cycle of breeding. Genetic disorders are systematically removed from the breeding stock, and the inbred plants become more vigorous over time. 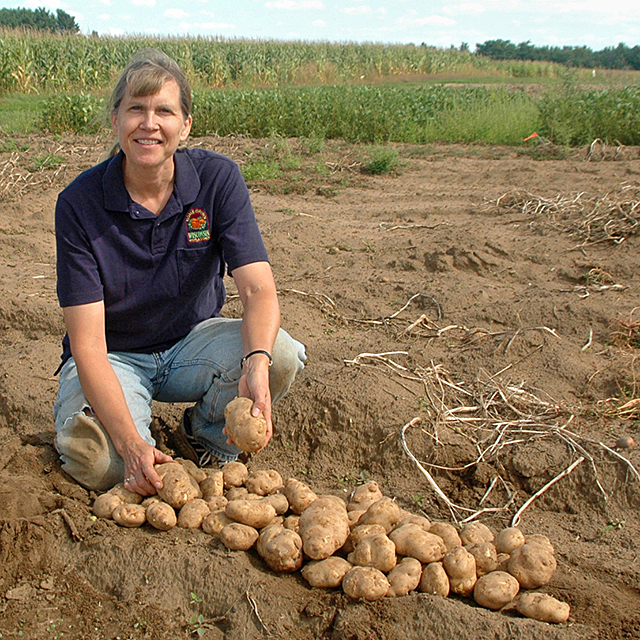 UM – When some people hear the word 'hybrid,' they may think of something high-tech or efficient.  Does this apply to hybrid potatoes?

PB & SJ – Hybrids have been promoted as superior to other varieties for decades. In many cases, the results observed on the farm have backed up the hype. By carefully choosing male and female inbred parents, plant breeders have been able to produce seeds that give rise to highly uniform plants that express traits that benefit growers and consumers. However, extra breeding effort is required to create inbred lines and test various combinations of crosses between inbred lines to see which produce superior potatoes. Much of this work can be done with the aid of computers and DNA sequence data rather than field trials.

PB & SJ – None of our current potato varieties are hybrids in the narrow plant-breeding sense. The potato-breeding community is trying to take a giant step forward and generate potatoes that seem familiar on the outside but are substantially different in their DNA. We've been using Potato 2.0 as a name for these new potatoes. That name suggests both the belief that we are beginning the next chapter in the potato's role as a food crop and an underlying genetic change.

For Potato 2.0, we are capturing the genetic information found in our best potato varieties but restricting it to two chromosomes. Doing this will allow us to make potato breeding much more efficient. 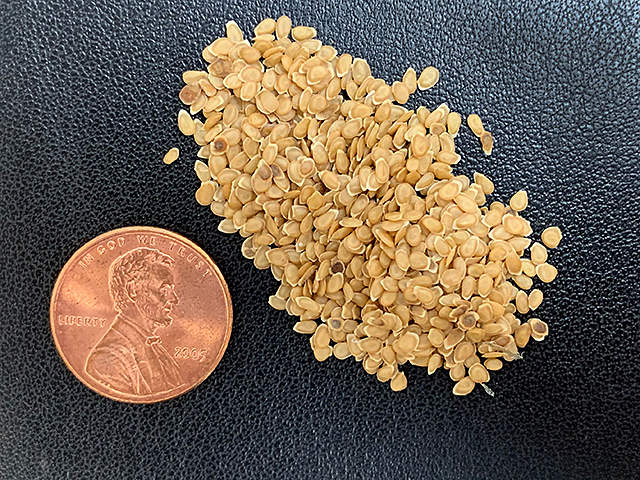 UM – What are the benefits of hybrid potatoes, for growers and for consumers?

PB & SJ – By creating inbred lines, we can "fix" important market quality traits. For example, in the current system, when a breeder makes a cross between two red varieties, the offspring range in color from white to pink to red. We expect that we will be able to create red inbred lines that, when crossed, produce hybrid offspring that only have red skin. We refer to this by saying that red skin color has been "fixed" in the inbreds. If we can fix major traits important to each market class (such as red skin color, russeting, tuber shape, fried product color, potato virus Y resistance), then breeders will not have to sift through their trial material looking for offspring that have these traits. All of the offspring will have them. That allows breeders to move beyond the basics and focus on other market traits that consumers and growers want.

For example, they could focus on how many potatoes a plant produces, the nitrogen use efficiency of the vines, the glossiness of the potato skin, or the starch quality of the potatoes. As additional traits are added and fixed in inbred lines, their hybrid offspring will all carry those traits. Over time, we will be able to continuously, incrementally build better varieties.

UM – In general, what are the advantages of hybrid foods?

PB & SJ – Hybrid food crops are generally uniform in appearance and performance. And, as alluded to above, consumers may eventually see potato varieties that are improved for consumer-oriented traits that breeders would like to focus more on, such as unique colors and shapes, enhanced nutritional quality, and better flavor. Growers may see new varieties that are improved for production traits such as resistance to pests and greater tolerance of weather extremes. Yield improvements in many hybrid crops have been impressive, and increases in yield help growers to feed more people with the same amount of land. 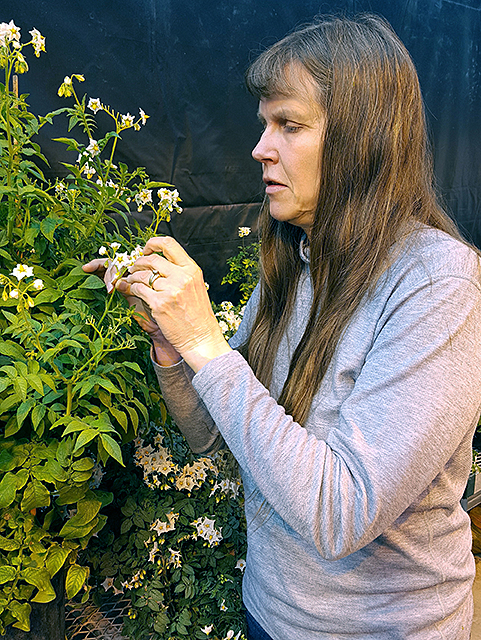 ARS research geneticist Shelley Jansky prepares a potato plant flower for pollination by removing the anthers, so pollen from another plant can be applied to the flower. This technique is used by potato breeders to select superior genetic combinations. (Andy Hamernik, D4344-1)

UM – Are there any health and nutrition concerns about consuming hybrid foods?

PB & SJ – Hybrid foods make up a large part of our diet already. Hybrid potato varieties should have the same health benefits as our current potato varieties. They will still be high in potassium and vitamin C, for example. However, hybrid breeding may allow potato breeders to respond to consumer preferences more quickly than conventional breeding. For instance, we might see high protein potatoes or potatoes with increased amounts of beneficial minerals.

UM – What will hybrid potatoes look like in the future, and when can we expect them in our grocery store?

PB & SJ – Hybrid potatoes will look and perform much like potatoes grown today. A consumer should not be able to distinguish between a conventional potato and a hybrid potato. What people should notice, however, is a steady stream of new varieties that keep up with their ever-changing needs and expectations for quality.