Reducing the Impact of Farming on Water Quality

Welcome Dr. Jaynes to Under the Microscope.

UM – Let's start by talking about the problems associated with water runoff from farms. Why is this such a problem?

DJ – Most of us are familiar with water running off the soil surface due to rainfall or snow melt. This runoff can carry sediment, nutrients, and pesticides into neighboring waterways. Water can also infiltrate the soil and percolate through the root zone; again carrying nutrients, especially nitrate – a very mobile form of nitrogen – and some pesticides. In soils where water drains slowly, farmers have improved the natural drainage by installing tiles or pipes a few feet below the ground to carry soil water away faster. However, the drainage water and its contaminants are still carried to surface waters, where they pose environmental and public health problems.

DJ – Dead zones (hypoxic zones) normally form in water where algal growth is stimulated by excessive nutrients in the water. As algae die and sink to the bottom of the water, they are decomposed by bacteria, which also consume oxygen in the water. If oxygen is not resupplied fast enough, its concentration can approach zero, effectively suffocating all species that live near the bottom of the water, such as shrimp and clams, thus producing a dead zone. In fresh waters, phosphorus is normally the most important nutrient in stimulating algal growth because normally it is the least available to the algae. In coastal salt water, nitrogen normally limits algal growth as it is the nutrient least available.

Agricultural areas with extensive artificial drainage are the primary source of nitrogen that is carried from the field through the drainage pipes to surface waters. Phosphorus from agricultural lands can also be attached to sediment and dissolved in the surface runoff.

UM – In 2019, the National Oceanic and Atmospheric Association (NOAA) forecasted a dead zone in the Gulf of Mexico the size of Massachusetts. How do they get so large?

DJ – The zones are stimulated by the influx of nutrients, especially nitrogen and phosphorus. In springs when there is flooding or heavy rains in the Mississippi River basin, nutrient losses to the Gulf can be much greater than normal. In these years, the Gulf hypoxic zone can get to be very large if Gulf weather is favorable. Conversely, in dry springs, nutrient losses to the Mississippi River and Gulf are much reduced and the size of the hypoxic zone is much smaller. Unfortunately, springs seem to be getting wetter in the Midwest, stimulating large hypoxic zones.

UM – Can the size of these dead zones be reduced?

DJ – The best science we have on the causes of hypoxic zones is that nutrients are required for hypoxic zone formation.  If we can reduce the annual amount of nutrients entering these waters, they should respond by a reduction in size and duration. 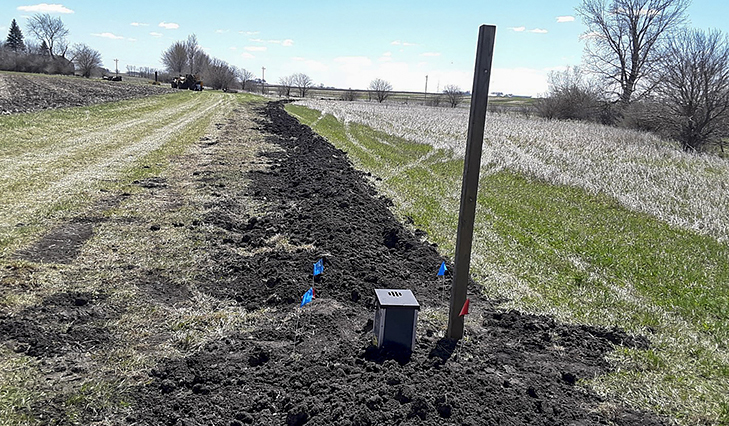 UM – What are the long-term environmental and human health concerns with nitrogen and other elements from agricultural runoff feeding into our streams, rivers, and estuaries?

DJ – Nitrogen in freshwater streams and lakes can have some negative effects on water organisms. However, our biggest concern is when nitrate concentrations exceed the Federal limit in drinking water. When exceeding this limit, the water is hazardous for infants to drink and may increase the risk for developing cancer.  As nitrogen moves downstream and enters coastal waters it often is the major driver of increased algal growth that can lead to the formation of hypoxic zones.

DJ – We have shown that nitrogen availability in fields varies by both location and year. Thus, the optimum application of nitrogen fertilizers should also vary each year and may change across a single field. Today, there is an entire industry helping farmers determine these optimum rates and developing equipment that helps farmers apply varying rates across a field. 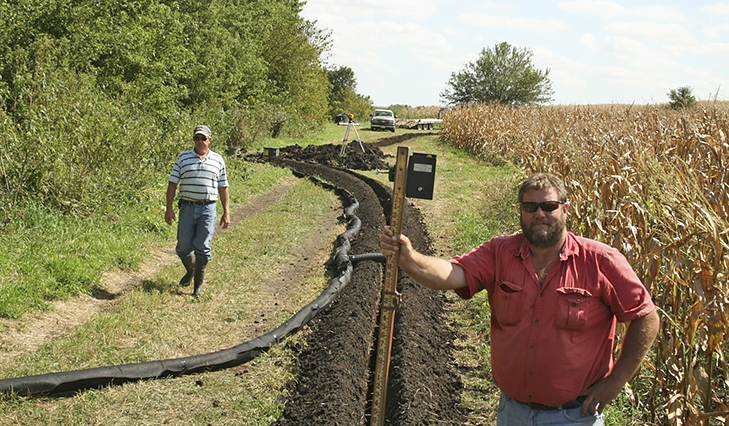 DJ – However, our research has shown that nitrogen fertilizer management alone will not solve the problem of excess nitrogen in surface waters. ARS has developed edge-of-field practices that can intercept and remove some of the nitrogen before it enters streams and rivers. We have tested and shown that bioreactors such as woodchip filled trenches and beds can remove much of the nitrogen in tile drainage. We have also developed a more cost-effective practice called Saturated Riparian Buffers that can also remove from 30 to 95 percent of the nitrogen in tile drainage. Stacking these field-edge practices with proper in-field nitrogen management practices, coupled with downstream practices such as restored wetlands, should allow farmers to reduce nitrogen losses by 45 percent or more over current losses.

UM – Which method is making the biggest impact today, and which method has the most long-term potential?

DJ – There is no one single method or approach that will reduce nitrogen losses sufficiently to solve either our drinking water issues or eliminate hypoxia issues. Instead, multiple practices will be needed. These include in-field practices by farmers, such as changing the timing and rate of nitrogen fertilizer applied, taking full credit for the nitrogen contained in any manure that may be applied, or changing crop rotations. Additional practices that can trap or remove nitrogen before it can move from the field to surface waters are also needed. These include edge-of-field practices such as controlled drainage, denitrification bioreactors, saturated buffers, and rebuilding of wetlands. 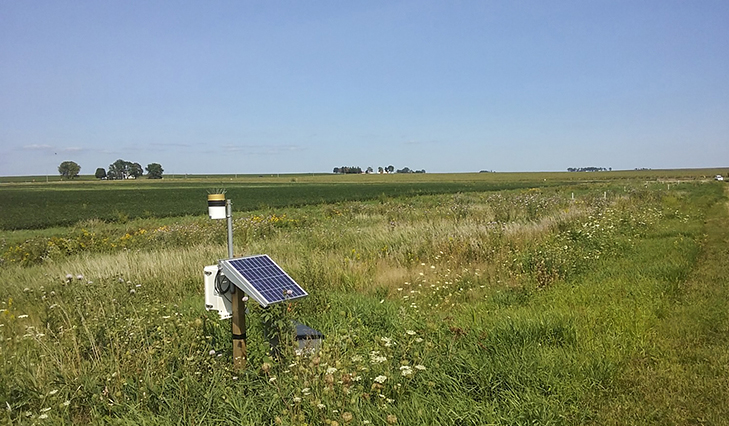 SB 1 yr after installation with datalogger and solar panel.

UM – How are farmers reacting to the need for reducing nitrogen runoff from their farms?

DJ – Many farmers are interested in doing what they can to limit these losses since it can mean a healthy improvement in their fields as well as the environment. Our job as researchers is to provide them with the tools and knowledge to assist them in changing or modifying their current practices to reduce nitrogen losses while maintaining or increasing their production. In addition, there are effective practices, such as field-edge practices, that do not directly increase the productivity of the farm and will need state and federal funding for wider farmer adoption.

UM – The Mississippi River/Gulf of Mexico Watershed Nutrient Task Force set goals of 20 percent reduction of nitrogen and phosphorus loading by 2025 and reduction of the size of the hypoxic (dead) zone to less than 5,000 km2 by 2035. Do you think these goals are achievable?

DJ – It is possible to meet these goals, but only if every farmer participates in the effort. While not all practices for reducing nitrogen losses are adoptable by every farmer, they need to adopt practices that will work on their soil, field, and farming operations. State and local governments, along with private partners in agriculture, must also provide the funds and expertise to help farmers adopt effective practices that reduce nitrogen losses.