Skip to main content
ARS Home » Office of Communications » DOF » Want To Beef Up Cattle Production? There Will Soon Be an App for That

Want To Beef Up Cattle Production? There Will Soon Be an App for That

A team of researchers in the Midwest, including Agricultural Research Service scientists from the U.S. Meat Animal Research Center (USMARC) in Clay Center, NE, is developing a web-based tool that will help cattle producers select the best bull for their herds.

Called iGENDEC, for internet genetic decisions, the tool will give beef cattle producers a way to compare bulls. They can then make breeding decisions based on data available from research studies and multiple genetic evaluation systems.

"The plan is that iGENDEC will be web-based to increase the ease and likelihood of use," said Larry Kuehn, research geneticist at USMARC. "It will provide economic rankings between bulls that producers could choose from so that they can pick which would be most beneficial to their economic bottom line."

Producers will input data from their operation — breed composition, average weaning weight, marketing program, feed costs, etc. — and iGENDEC will rank bulls from multiple breeds according to which might improve herd profitability. The program uses criteria that weigh the economic impact of traits according to their expected returns or costs, Kuehn said. 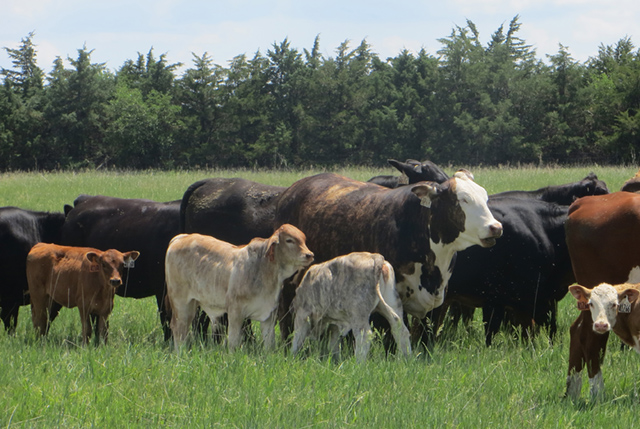 ARS researchers are developing a web-based tool that will help cattle producers select the best bull for their herds. iGENDEC will rank bulls from multiple breeds according to which might improve herd profitability based on data input by producer; breed composition, average weaning weight, marketing program, feed costs, etc. (Photo by Mark Thallman, D3275-1)

Early testing has shown promising results. The team used bull sale catalogs for iGENDEC's alpha phase testing. From a quick glance in just one catalog, they saw profit differential between two bulls of at least $20 per mating. "Given that a bull could easily sire 50-100 progeny, this differential could result in at least a $1,000 profit difference between bulls," Kuehn said. "We expect these differences to increase with more traits and wider variation across producers and herds."

There are other genetic evaluation systems available that provide their own selection indices; however, they are not customized to the environments, markets, and types of production of individual producers.  The customizable system of iGENDEC will improve upon these indices, Kuehn said.

iGENDEC's potential may also extend from ranch to table. "Consumers may not initially see a direct result, but increased efficiency and profitability for producers will keep beef prices competitive," Kuehn said. "But the tool could be adapted to meet consumer demands and markets for beef, such as improved taste, healthfulness, and environmental impact. If market forces from consumers dictate that they are valued and methods are developed to collect data and develop genetic prediction for these trait complexes, they could be added to iGENDEC."

iGENDEC will move to beta testing later this year and should be available to beef cattle producers in 2021.