When it comes to feeding livestock, farmers and ranchers are literally leaving money on the table — or rather, on the ground.

According to a 2019 research paper on the subject, it is both nutritionally and financially feasible to graze livestock on corn stover — the husks, leaves, and fallen kernels left behind after the harvest.

"Generally, grazing on corn residues allows cattle to maintain their body condition over the winter months," explained Marty Schmer, one of the paper's authors and a research leader ARS's Agroecosystem Management Research Unit in Lincoln, NE.

Grazing corn stalks in late fall or winter provides an excellent resource for beef cattle and weaned calves, especially if they have appropriate protein supplementation, such as ethanol by-products (distillers' grain), Schmer said. Producers can graze their pregnant (gestating) beef cows on corn residue because cows can maintain their weight on stover. 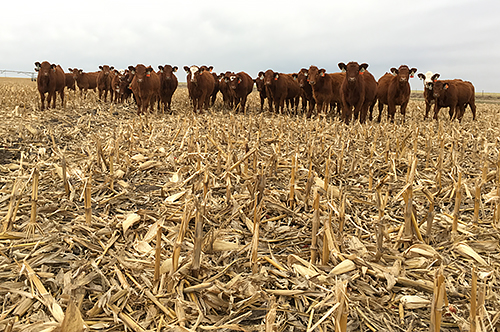 Farmers and ranchers work together by having cattle graze on cornfield residue after harvest. (Photo courtesy of Mary Drewnoski, University of Nebraska-Lincoln)

In 2019 alone, the research group estimated that corn residue in just four Central Plains states was worth about $286 million. Schmer said the gross economic value of corn residues for the livestock sector was greater than $191 million for the states of North Dakota, South Dakota, Nebraska, and Kansas. In addition, farmers who leased their corn ground to livestock producers generated over $95 million to the crop sector in those same states.

While most current corn residue grazing occurs in the western Corn Belt states, Schmer said there may also be potential for producers who want to develop integrated crop-livestock systems in the eastern Corn Belt. The U.S. Corn Belt includes the Dakotas, Illinois, Indiana, Iowa, Kansas, Michigan, Minnesota, Missouri, Nebraska, and Ohio. Advantages of expanding the practice to the eastern states include managing residue quantity in high-yielding environments and providing a source of supplemental revenue for the landowners.

Winter-feeding cattle in America's cornfields is not a new concept, as documents record the practice in the New England colonies as early as 1662. However, Schmer said, as crop and livestock farms became more specialized in the last century, there was less demand to graze corn residue because livestock were a less integral component of crop farms. As livestock numbers shifted to the west, grazing corn residues was practiced mainly within the Central Plains.

From an environmental standpoint, winter grazing cattle in cornfields is neither good nor bad; but, anecdotally, farmers may benefit from the "free" natural fertilizer the cattle provide while dining on leftover stover.

According to Schmer, about 11.7 million head of cattle helped farmers and ranchers clean up — literally and figuratively — 10 million acres of post-harvest cornfields in 2018. That total, while impressive, also leaves plenty of room to grow, and graze, in the future. — by Scott Elliott, ARS Office of Communications.