ARS Science Leads Way in Screening at the Molecular Level

Fungal pathogens represent a large and economically significant challenge to crops worldwide. The challenge is so great, in fact, diseases caused by fungal pathogens can cause crop losses of 10-20% (worth $100-$200 billion) each year.

Historically, a variety of biological, chemical, and mechanical methods have been used to fight fungal diseases, said Roger Wise, a plant geneticist with the ARS Corn Insects and Crop Genetics Research unit in Ames, IA. Lately, though, researchers have focused on molecular methods to develop disease-resistant crops, which would reduce the need for, and damage caused by, chemical fungicides.

For these methods to be effective and durable, researchers need a thorough understanding of the molecular interactions between crops and their pathogens. To achieve that, large-scale sequencing of genomes now provides unprecedented access to the networks that underlie plant-pathogen interactions. Wise said it's like using an online app to find a specific street address anywhere in the world. 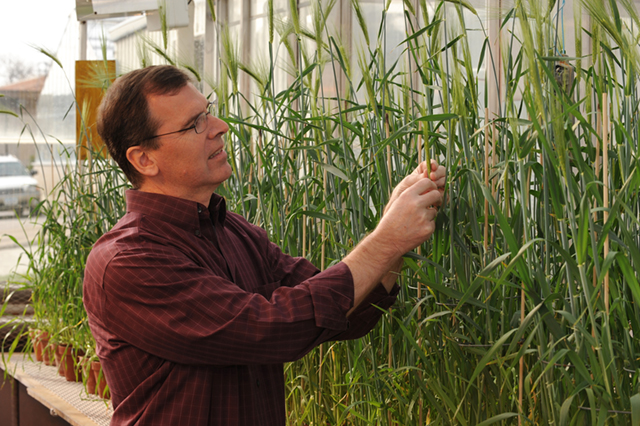 Wise and his team of researchers are using these powerful genomic technologies to study how powdery mildew, a fungus that can reduce crop yields by as much as 40%, affects barley and wheat at the molecular level. "Much of the research centers on effectors, or proteins, secreted by the fungus that sabotage or weaken plant defenses and how they interact with host protein targets to cause disease," he said.

In collaboration with Iowa State University, Wise used custom "big data" methods to identify over 66,000 protein-protein interactions and then modeled cellular responses to powdery mildew infection (big data refers to very large, diverse sets of information that are analyzed using computational methods to reveal new patterns, trends, and associations). In the process, they identified 15 new barley mildew-interacting proteins that they predict will localize to five diverse cellular locations over the course of infection.

"These results anchor new disease-resistance interactions within the cell during immune response and will enable future work to understand key components of disease defense," Wise said. "This will promote new investigations from lab to fields, which will be critical to breeders and growers to produce better crops." – By Scott Elliott, ARS Office of Communications.

Also in the series on fighting fungal pathogens: