Welcome Dr. Ruhui Li to Under the Microscope.

UM – Rapid apple decline (RAD), also known as sudden apple decline, was first discovered and documented a few years ago in several mid-Atlantic states, such as New York and Pennsylvania. Has this condition been found in other regions?

RL – As far as I am aware, the Mid-Atlantic zone has the most reported RAD cases, but there have been several isolated cases on the West Coast (Washington state) and also some other reports in Ontario, Canada.

UM – Why is RAD such a troubling disease for apple growers, and how does it affect consumers in general?

RL – RAD causes the rapid decline and consequent death of trees. This is a serious and costly problem for farmers and growers. The impact of RAD is estimated to cost Pennsylvania apple growers approximately $13,000 per acre and New York apple growers $3,380 per acre, which is a heavy financial burden.

The cause of the problem may differ from one region to another, so it's tremendously difficult to narrow down the major causal factors that can be used for management of RAD.

Ultimately, the reduction of apple production in affected regions results in the unavailability of some cultivars to consumers and may impact price of the ones that are available.

UM – Why has RAD been such a mystery to figure out?

RL – There are several reasons why it's been difficult to come up with a real conclusion about RAD. The definite cause of the problem has yet to be identified. We suspect that a complex of biotic and abiotic factors may contribute to RAD. Biotic factors include genetic background of apple cultivars, viruses, microorganisms, and insects. Abiotic factors consist of environmental and cultivation stresses. To further complicate things, the complex may vary from region to region.

UM – What are some of the symptoms of RAD?

RL – RAD is the rapid decline of young, dwarf apple trees.  It has affected multiple varieties on dwarf rootstocks.

We have observed that necrosis (cell death) starts at the site of the graft union and then goes up the trunk of the affected tree. There is significant and severe bark shedding around the graft union and cankers are also usually present. The affected wood is solid, not spongy. But while the graft union is affected by this condition, the rootstock appears to be perfectly healthy. The leaves of the trees look pale yellow before turning into a reddish color. And finally, the affected trees with fruits collapse, with a full load of fruit, from July to September. 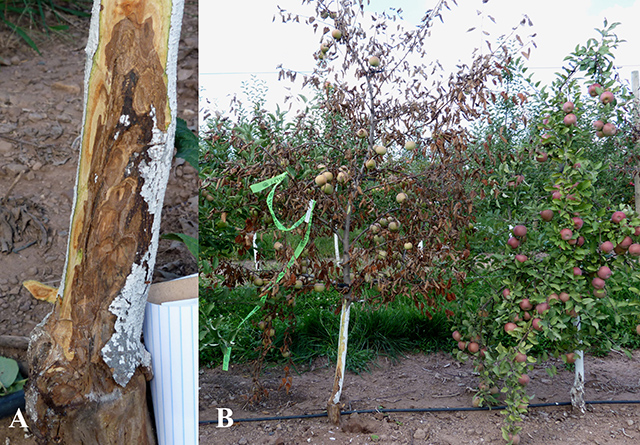 Figure A depicts necrosis at the graft union, while Figure B shows the collapse of an RAD-infected apple tree.

UM – What are the potential causes of this condition?

RL – We don't have definite answers yet. The fungal or viral pathogens of previously reported apple decline diseases were not detected.  We also did not detect the pathogen fire blight (E. amylovora) and the pathogen that causes proliferation (phytoplasma), a common contagious disease afflicting apples and other plants of the family Rosaceae such as pears.

Furthermore, infections of several viruses are common in the affected orchards, but none of those viruses were present in all the RAD-affected trees we studied. Pathogens relating to rot diseases of the tree roots and crown were also not found in newly declined trees, but some of them may eventually work as secondary factors to further weaken the trees.

In terms of insects, which are oftentimes vectors of disease, we did not find large numbers of bugs like borers in the orchards, and they were normally found on problematic trees, not healthy ones. Insects are attracted by certain chemical compounds, such as ethanol emitted by affected trees, and may contribute to RAD as secondary factors later on, however.

Environmental stresses like a severe winter, drought, or heavy rainfalls may also be associated with RAD in some regions, but they don't explain cases of RAD in other regions.

We also considered the application of certain herbicides as a potential cause of RAD symptoms, but again, it doesn't correlate with all the cases of RAD.

UM – What techniques have you and your team used to detect and study RAD?

RL – High-throughput sequencing, also known as next-generation sequencing (new tech that sequences DNA and RNA rapidly and cost-effectively), has been used to identify viruses and viroids (infectious small RNAs smaller than viruses) in the affected apple trees.  We've used PCR and other DNA sequencing technologies to detect known and new viruses within the samples.

UM – Are certain apple trees more vulnerable to RAD than others?

RL – From what we've researched, young dwarf trees between 2-8 years old are the most susceptible.  Some cultivars were also shown to be particularly affected, including Gala, Honeycrisp, Ambrosia, and Fuji.  In general, orchards with denser planting are more vulnerable. 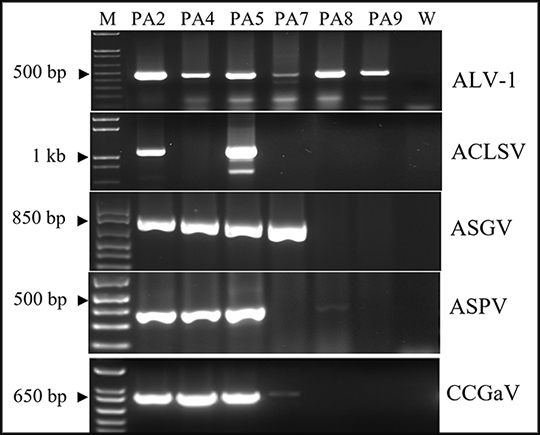 UM – How can growers prevent or defend their crop against RAD?

RL – As mentioned, the cause(s) for RAD are currently unknown. Consequently, we cannot recommend specific steps targeted to protecting their crop from RAD. Horticulturists do recommend the following best management practices for apple cultivation. Growers can plant apple trees from a virus-free certification program and use resistant rootstock. They should avoid cultivation practices such as high-density planting, frequent use of herbicides, and high-level fertilization to push trees for high yields. They should not plant seedlings in spots where affected trees used to be, even after they are removed from an orchard.

RL – Again, the cause(s) for RAD are currently unknown. There are apple diseases that resemble RAD, such as apple union necrosis and decline (infection of tomato ringspot virus). In addition, we are also aware of diseases that afflict other types of fruit-bearing trees, such as citrus tristeza quick decline disease (infection of citrus tristeza virus in citrus on sour orange rootstock), citrus sudden death (infection of several viruses in sweet orange on Pangpur lime rootstock) in Brazil, mango sudden decline syndrome (root infection by several species of fungus), pear decline (Candidatus Phytoplasma pyri), and almond decline (a combination of trunk fungi, water deficiency, and tree stresses).

UM – As a plant pathologist, what do you think are the greatest threats that growers of apples (and other fruit-bearing trees) must overcome in the future?

RL – Planting too few cultivars over too large areas could contribute to large scale losses, if the cultivars are all vulnerable to the same biotic or abiotic threats. — by Georgia Jiang, ARS Office of Communications.