The Grand Forks Human Nutrition Research Center came about as the result of efforts started in the early 1960's to consider the need for a national program of human nutrition research. Such a need was addressed by Senator Milton Young of North Dakota in a 1963 report he submitted to the U.S. Congress. That report, prepared by the Agricultural Research Service of the U.S. Department of Agriculture, outlined the need for an expanded national research program in human nutrition and proposed to establish three regional research laboratories each near a medical school: one each in the North Central, Southeast and Southwest United States. 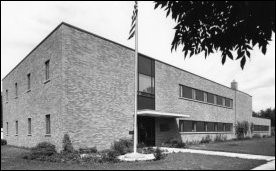 The Grand Forks Human Nutrition Research Center was the only laboratory established under the original concept of that report; it was established as a field station of the Vitamins and Minerals Laboratory of the ARS Human Nutrition Division in Beltsville, MD. Planning for the Grand Forks facility began in 1966; the actual construction began in 1969 on land provided by the State of North Dakota. The building, located immediately adjacent to University of North Dakota campus, was completed in September, 1970. Modest by today's standards, the original building consisted of five research laboratories and an austere 8-bed metabolic ward. The facility was dedicated with a scientific symposium entitled "Newer Trace Elements in Nutrition."

In 1972, the Grand Forks facility was designated a Human Nutrition Research Laboratory of the ARS North Central Region. In 1976, the laboratory's capabilities were expanded beyond research with experimental animals with the inauguration of an active clinical nutrition research program. In 1977, the laboratory was designated the Grand Forks Human Nutrition Research Center.