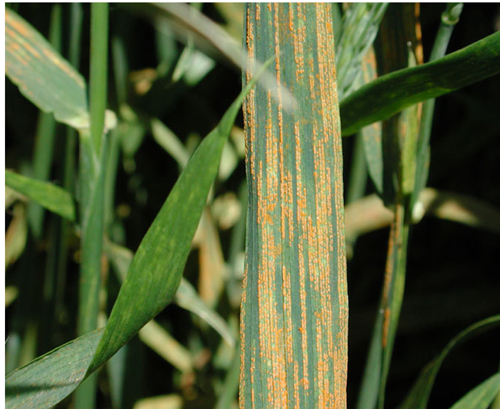 DISTRIBUTION:
Generally throughout wheat production areas at high elevations and in the northern and southern areas of temperate regions.

YIELD LOSS:
Losses of 40 percent can be common with some fields totally destroyed. It is a major disease of fall seeded wheat in regions with cool nights or of spring wheat planted adjacent to infected fall seeded wheat. Severe losses result when spikes are infected.

SYMPTOMS:
The small yellowish uredinia appear in linear rows on the leaf. A single infection can result in a stripe the length of the leaf. Uredinia also can occur in the spike. Stunting of plants is common with severe early infections.

ENVIRONMENTAL CONDITIONS:
Infection occurs from 0 to 25 C, with free water on the leaf and may occur beneath the snow. During hot or dry periods sporulation ceases but will often restart with a return to cool moist conditions.

INOCULUM SOURCE AND INFECTION
It was widely accepted that urediniospores were the single source of inoculum, however, a recent study by Jin et. al. proved Berberis spp. serves as an alternate host for the wheat stripe rust pathogen.  Inoculum often comes from volunteer wheat plants and dormant infections that initiate or continue sporulation when conditions become favorable. Inoculum may move from nearby fields that were sown earlier or from later maturing fields.

Free water on the leaves and temperatures of 0 to 25 C are required for spore germination. Penetration is through the stomata. The latent period may vary from 11 days with mean daily temperatures of 15 C, to perhaps 180 days with near freezing temperatures.

SURVIVAL:
Hot summers and dry seasons are most threatening to stripe rust survival. Survival between crop seasons is by dormant mycelium and uredinia on infected volunteer wheat in most areas. In mountainous tropical and subtropical areas stripe rust can survive by moving up and down the mountain on seeded wheat. Infected grasses probably play no role in survival in most of the world.

METHOD OF DISSEMINATION:
Windblown urediniospores are the primary method of dispersal. Stripe rust urediniospores probably are less tolerant of environmental extremes then either leaf or stem rust of wheat.
The disease was transported accidently by man into Australiain 1979, and barley stripe rust, a similar disease, into Columbia in 1975.

CONTROL:
1. The use of resistant cultivars.
2. Control of volunteer wheat and seeding dates.
3. The use of fungicide sprays.