Another extremely important example of the value of the world rice collection was the identification and use of the semidwarfing gene. Most rice grown around the world prior to the 1960s was very tall and would commonly fall down (lodge) prior to harvest thus, reducing the grain yield. Farmers were limited in the amount of fertilizer that could be applied to the crop because this caused further lodging. The variety Taichung Native 1, from Taiwan, possesses a gene (sd-1, semidwarf) which dramatically reduces the height of the plant. This gene has been used around the world in rice breeding and resulted in the “green revolution” in rice. Farmers could apply fertilizer to their crop, dramatically increasing the grain yield without fear of the rice plants toppling to the ground before it could be harvested. In the USA, Taichung Native 1 was also used extensively in breeding to reduce the height of US varieties. One of the first widely grown semidwarf US varieties was Lemont, released in 1986. Today, most USA varieties possess the sd-1 gene. 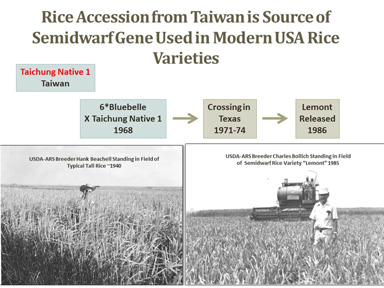 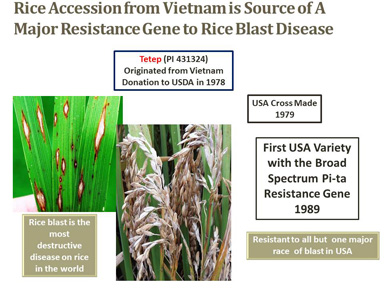 Diseases can also reduce grain production. Rice blast is one of the most damaging diseases to the crop and is a constant worldwide threat. The disease can be managed to some extent by applying fungicides, but these are expensive and the timing of application is critical for good disease control. The variety Tetep, from Vietnam, was found to have excellent resistance to rice blast disease. This variety was introduced into the USA in 1978 and used in rice breeding programs. It was later found that Tetep possesses the Pi-ta gene that conveys resistance to all but one of the known isolates of the blast fungus that occur in the USA. The first USA variety (Katy) having Pi-ta was released in 1989. Many other varieties have been subsequently released in the US that possess this same gene that traces back to Tetep.