The work done here at NPARL has been recognized by others throughout the years, both within the federal government and in other public agencies. Below are links to separate categories that are comprised of individual listings. 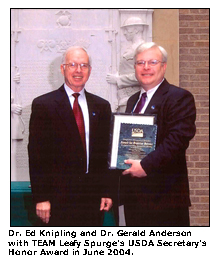 The Agricultural Research Service's TEAM Leafy Spurge program was named a recipient of a U. S. Department of Agriculture 2004 Secretary's Honor Award for exemplary service and achievement. The Honor Awards are the most prestigious awards given by USDA and the winners represent outstanding service in many fields, including stewardship of natural resources, scientific research, disease control, environmental innovations, educational outreach, emergency response to disasters, food safety, farm and food program delivery, trade and export development and rural economic development. U.S. Secretary of Agriculture Ann Veneman will present the award to TEAM Leafy Spurge Group Leader Dr. Gerald Anderson at a ceremony on Friday, June 25, 2004, in Washington, D.C. The ceremony will be transmitted live via satellite. Other group members included Dr. Lloyd Wendell and Robert Richard, with the Animal and Plant Health Inspection Service; Dr. Chad Prosser, formerly with NPARL and currently with the National Park Service in Medora, ND, and Bethany Redlin and Jill Miller, with NPARL.

TEAM (The Ecological Area-wide Management of) Leafy Spurge is a 6-year, integrated pest management (IPM) research and demonstration program headquartered at the USDA Agricultural Research Service's Northern Plains Agricultural Research Laboratory (NPARL) in Sidney, Montana. The program was nominated for its development and implementation of a highly effective, biologically based IPM system for managing the noxious weed leafy spurge across wide geographic and political boundaries. The system incorporated biological control agents with other more traditional management tools leading not only to dramatic reductions in leafy spurge infestations, but also to significant reductions in herbicide use, further protecting and enhancing the environment. In accomplishing its goals, TEAM Leafy Spurge developed far-reaching partnerships with numerous federal and state agencies, land-grant universities, local entities and organizations and private landowners. It has been hailed as a model for tackling other noxious weeds by leaders in the field and program participants alike.

2007 Excellence in Information Award
Beth Redlin was recognized once again for outstanding contributions to the creation and distribution of information products and technologies that support agricultural research and education. She received this award for exemplary service and creativity in information technologies that communicate ARS findings to customers and promote NPARL, ARS, and USDA accomplishments regionally, nationally, and internationally.

2006 AFM Support Awards for Excellence
Jackie L. Couture received the Administrative and Financial Management (AFM) Support Award for Excellence for 2006. The Bronze Award for Excellence was given in recognition for her tireless support of Executive Order 13148 - Greening the Government through Leadership in Environmental Management and ARS' Environmental Management Program. It was also one of the first awards given that was not directly related to Hurricane Katrina. Recipients were recognized at the ARS Annual Recognition Program held on March 6, 2007, in Washington, DC.

In 2005 she spearheaded the local emergency planning committee's efforts in the second event held within the state of Montana and the first event ever held in a rural community. This is now an annual event she hopes to be held as long as there is a need. 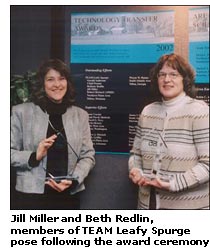 2008 Award of Excellence for Scientific Support
Bill Iversen, a physical scientist with the Agricultural Systems Research Unit at NPARL, is the 2008 recipient of ARS Northern Plains Area (NPA) Award of Excellence for Scientific Support. The NPA includes 14 labs in 8 states, including Montana, North and South Dakota, Wyoming, Kansas, Nebraska, Utah and Colorado Bill was nominated for the award because of his "rare blend of technical expertise in field instrumentation (dataloggers, GPS), software (SAS, GIS, AutoCADD) and outstanding shop skills (welding, milling) coupled with a practical approach to research (a result of his many years of running his own family farm enterprise). In particular, his vast knowledge of and experience with irrigated and dryland farming operations greatly improves the efficiency and relevance of (NPARL) research activities." For example, Bill has been an integral player in NPARL's pioneering work on strip tillage in sugar beets, helping to design and adapt strip tillage and other farm equipment for use with the small-seeded crop, as well as helping to adapt the specialized irrigation system used to conduct that research. The result of that research effort has been the conversion of thousands of sugar beet acres in the region to strip till, saving producers between $60-$100 an acre in time and fuel costs. Bill's "work ethic, intellectual curiosity, creativity and common sense approach to science and farming make him a model member of NPARL," the NPA and ARS. Congratulations, Bill!

2006 Award of Excellence for Secretarial Support
Jill Miller won the 2006 NPA Award of Excellence for Secretarial Support. The biennial award was presented at the NPA Leadership Conference held in Wichita, KS on April 4, 2007. She was acknowledged for her contribution to the mission of the NPA and the Agricultural Research Service. She served as secretary at the Northern Plains Agricultural Research Laboratory for a total of 16 scientists in two units: the Pest Management Research Unit and the Agricultural Systems Research Unit.

As the secretary, she was recognized for her outstanding achievement and creativity in delivering administrative services and enhancing the quality of life.

Other Awards and Recognitions 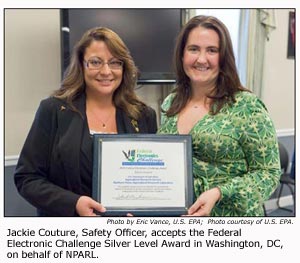 USDA ARS Northern Plains Agricultural Research Laboratory (NPARL) was recognized for their leadership and achievements in the Federal Electronics Challenge (FEC) during fiscal year 2010 by the Office of the Federal Environmental Executive (OFFEE) and the U.S. Environmental Protection Agency in Washington, DC. Electronic stewardship actions have helped the Federal government improve its sustainable practices when purchasing, managing and disposing of electronics.  The award was accepted by Jackie Couture, NPARL Safety Officer, on October 8, 2010. 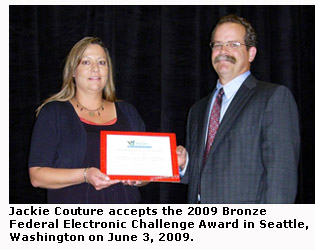 NPARL was also named a 2009 Federal Electronics Challenge Award Bronze Level winner and will be recognized at the 2009 FEC Award Ceremonies to take place at the Federal Environmental Symposium (FES) West on June 3 at Seattle, WA. The FEC awards, established by the Office of the Federal Environmental Executive and U.S. Environmental Protection Agency, recognize the efforts of federal partners to increase their electronic stewardship efforts, with emphasis placed on three areas: purchasing greener electronic products; reducing impacts of electronic products during use and managing obsolete electronics in an environmentally safe way. NPARL won the award for its activities in all three areas. Congratulations to the entire lab for their contributions to this effort throughout the year! 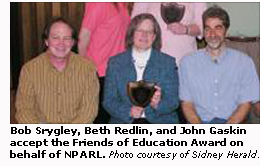 The Northern Plains Agricultural Research Laboratory in Sidney MT was recognized as the winner of the 2009 Sidney Middle School "Friend of Education" award at this year's Sidney Education Association banquet held Friday, May 8, in Sidney. Dr. John Gaskin, Research Leader for the ARS lab's Pest Management Research Unit, accepted the award on behalf of the Sidney ARS lab. NPARL employees were recognized for their contributions in helping to judge local science fairs, providing programs and tours of the research facility, and helping on various field trips throughout the year. 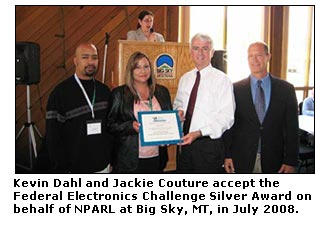 NPARL was recently named a 2008 Federal Electronics Challenge (FEC) Silver Level Award winner and will be recognized at the 2008 FEC Award Ceremonies to take place at the Federal Environmental Symposium (FES) West on June 18 at the Big Sky Resort in Big Sky, MT. The FEC awards, established by the Office of the Federal Environmental Executive and U.S. Environmental Protection Agency, recognize the efforts of federal partners to increase their electronic stewardship efforts, with emphasis placed on three areas: purchasing greener electronic products; reducing impacts of electronic products during use, and managing obsolete electronics in an environmentally safe way. NPARL's FEC award is the first for an ARS laboratory in the Northern Plains Area, and only the second for ARS nationwide. The USDA-ARS Cropping Systems and Water Quality Research Unit in Columbia, MO is the only other ARS award winner, earning both silver and gold awards under the program the previous two years. 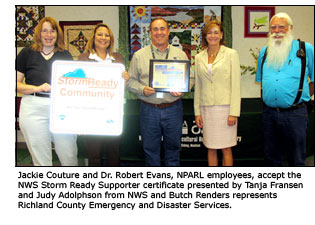 The USDA-ARS Northern Plains Agricultural Research Laboratory(NPARL) in Sidney was recognized August 10th as a "StormReady Supporter" by the National Weather Service (NWS). In announcing the award, Tanja Fransen of the Glasgow, MT weather forecast office noted: "The USDA station in Sidney has been extremely pro-active over the last few years in being prepared, not just for hazards within the facility but also to help with preparedness activities within the community. USDA safety officer Jackie Couture is the chair of the Richland County Local Emergency Planning Committee and actively involved with the Community Emergency Response Team. This is just a natural extension of all the great work they have been doing to help with preparedness in their workplace and the community." The Sidney, MT ARS lab regularly hosts severe weather training courses and winter weather safety programs for both its employees and the community at large. Fifteen NPARL employees have been certified as NWS weather spotters.  NPARL completed a series of rigorous warning criteria necessary to earn the distinction of being the first Storm Ready Supporter in Montana and only the 17th in the nation. The Sidney, MT research facility is also the only ARS facility in the nation to be so recognized.

The Northern Plains Agricultural Research Laboratory (NPARL) has been an active player in Technology Transfer efforts to relay research results and scientific findings. One of its many notable accomplishments is the development of TEAM (The Ecological Area-wide Management) of Leafy Spurge project, a 6-year, 4-state, integrated pest management (IPM) program. In promoting the IPM approach, TLS has distributed more than 48 million biological control insects in 13 states and 3 Canadian provinces, and developed more than 20 informational products, including a website, how-to manuals, CD-ROMs, newspaper articles and a PBS documentary that was selected as a finalist for a Telly Award, the non-network equivalent of the Oscars.

But TEAM Leafy Spurge is not the only successful Technology Transfer effort underway at NPARL. Other significant projects in the past year include registration of a new patent that has the potential to combat sugar beet leaf spot, development of a new website for the Hoary Cress Consortium, with information on that noxious weed and biological control efforts underway to combat it, and additions to the lab's existing grasshopper management website that included the posting of regular outbreak maps for the region.

One of its greatest contributions is to the local community. NPARL regularly participates at local and regional ag exhibitions as well as offering school tours, educational exhibits and classroom presentations. The NPARL Weather Network also provides hourly weather information from area sites.

The FLC, formally chartered by Congress in 1986 to promote and strengthen technology transfer activities, is a nationwide network of federal laboratories that strives to link laboratory-developed technologies and expertise with the private sector. More than 700 major federal laboratories and centers and their parent departments and agencies are FLC members. The Mid-Continent region of the FLC includes fourteen states and over 100 laboratories.

ARS Rep Receives National Award (2004)
Beth Redlin, Technical Information Specialist with the USDA/ARS Northern Plains Agricultural Research Lab (NPARL) in Sidney, has won the 2004 Excellence in Information Award. This national award, given annually by the ARS, honors the individual who has exhibited exemplary service in information sharing that communicates ARS findings to customers and promotes NPARL, ARS, and USDA accomplishments throughout the region, nation, and internationally. Redlin's nomination, based on a compilation of all the work she has done at the Sidney ARS lab, made it all the way to the top of the heap, winning out over information specialists from other ARS labs across the country. This is definitely an honor and very unexpected, especially since we are a small lab, Redlin says of her outstanding accomplishment.

The Roundup (https://www.roundupweb.com/) By Lois Kerr