Today all of this research is conducted in the new lab/office building complex that was completed in the Summer of 2002.  NPARL currently has 18 scientists and employs more than 40 full-time staff.

The Sidney lab continues to thrive along with its ever-expanding research scope as it looks to the future, prepared to address the concerns of ag producers in this unique region for years to come.

The 1950's - The Beginning:  It's all a welcome addition and natural extension to a station that traces its humble origins back to the 1950s when local soil conservation districts, ag producers and main street businessmen joined together to push for construction of an ARS unit in Sidney. Recognizing the unique growing conditions of the cool, semi-arid region surrounding the Sidney site and its convenient location near both glaciated and unglaciated soils, the local contingent presented its case to Congress. Proponents pointed to the need for agricultural research tailored to specific climatic and topographic regions and how the Sidney location would be ideally suited to meet that need. Nestled in the center of the high quality hard spring wheat and durum growing region of eastern Montana and western North Dakota, the Sidney location also included the confluence of the Missouri and Yellowstone Rivers and their largely untapped irrigation potential.

Also integral to the appeal was the 20-year record of support for agricultural research by local soil conservation districts. Soil districts in Roosevelt and Sheridan counties were especially active in putting up money and land for research efforts, but strong support also came from Richland, Daniels, Valley and McCone County districts.

While attempts in the 1950s to launch a new lab in Sidney were initially unproductive, ARS did establish a presence in Sidney in 1955 when two ARS soil scientists, Dr. James Power and Mr. Gilbert Schumaker, were assigned to work with Glenn Hartman at the Eastern Montana Branch Station on dryland soils research. Cooperation between the two agencies helped to expand existing facilities, equipment and the research program conducted at the station, a cooperative alliance that continues to this day. 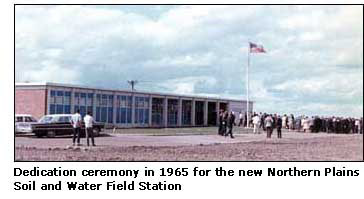 The 1960's - Establishing the Facility: Despite being rebuffed in their earlier attempts, local supporters continued to advocate for the establishment of an ARS research facility in Sidney. Their persistence was ultimately rewarded in 1963 when funding for a new station was approved and ARS soil scientist Francis Siddoway hired as lab director. The original building was erected on a 10-acre site donated by Montana State University's Eastern Montana Experiment Station.

The original ARS structure, dedicated in June 1965, was named the Northern Plains Soil and Water Field Station. Professional staff included Siddoway and fellow ARS scientist Alfred Black, who together pioneered the use of grass row barriers for wind erosion control.

Throughout the 60s, the Center continued to grow, its research efforts targeting crop, range and soil management issues, including studies in: rangeland hydrology and production potential; water infiltration characteristics of dryland crop and range soils; the hydrologic properties of "frail" soils; the soil/crop canopy environment, and early work in the use of remote sensing in making management decisions.

The 1980's - Trying Times:  With the completion of its successful saline seep research effort in the mid 1980s, national ARS officials called for the closure of the Sidney facility as a cost saving measure. Strong local support, however, ultimately led to a compromise wherein the station remained open, but its research was largely limited to two areas: conservation tillage and leafy spurge control.

The 1990's - A Promising Future:  But the seeds for its future growth had been sown. Control of leafy spurge and later grasshoppers became pivotal research areas and harbingers of what was to come. In 1996 the Range Weed and Range Insect Laboratories located in Bozeman, MT were moved to Sidney and a new name bestowed: the Northern Plains Agricultural Research Laboratory. Then, in 1997, TEAM Leafy Spurge -- a six-year, Integrated Pest Management research and demonstration project funded by ARS -- was centered at the Sidney lab. Its subsequent success, particularly because of TEAM Leafy Spurge using Aphthona flea beetles, has helped solidify the lab's reputation as a leader in the burgeoning biocontrol field. The lab also includes the largest ARS grasshopper research program in the nation.

Entering the New Millennium - Staying Strong:  Soil and water management research also remain critical elements of NPARL's mission. In 1999, a new irrigation research program was initiated, with an emphasis on high value crops and disease prevention in sugar beets. Already, one patent has been filed in connection with sugar beet research into the foliar disease, Cercospora leaf spot. In the new millennium, other research focuses on alternative crops, crop rotations, no-till management and precision agriculture for both dryland and irrigated systems, along with unique studies in soil quality that have identified soil-aggregating fungi and bacteria contributing to enhanced water infiltration and plant root growth.

Today NPARL employs more than 40 full-time staff and several more part-time and student aides, with the number increasing to more than 60 during the busy summer months and the Sidney lab continues to thrive as it looks to the future, prepared to address the concerns of agriculture producers in this unique region for years to come.