Latest Research Findings, Reports, and Publications for this Project 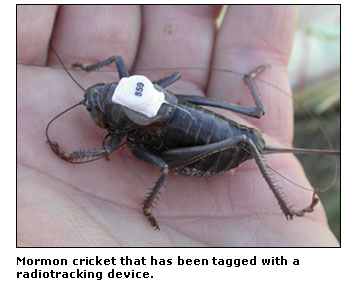 Outbreaks of insect pests are common and can have devastating effects on natural and agricultural ecosystems. Little is known about the causes of these outbreaks, not to mention the causes of en masse migrations during outbreaks. Our research has focused on flightless Mormon crickets (Anabrus simplex (Tettigoniidae)), a katydid species that forms large, mobile groups (migratory bands) during outbreak periods. We are interested in the ability of Mormon crickets to defend themselves from natural pathogens. We are interested in how those defenses change as the insects develop, migrate, and reproduce. Our objective is to find weaknesses in the immune system of these agricultural pests so that natural pathogens might be applied when and where they are most effective in pest control. Generally, insect migration away from natal sites is associated with lack of food or local crowding. So we are investigating whether the insects compromise the immune system to enhance locomotion when food is limited. Understanding band movement, individual dietary requirements and insect survivorship will improve forecasting of movements, damage to humans, and improve integrated control. Working with collaborators from Kent State University and the University of Sydney, we have been studying how diet influences band formation and movement to facilitate the development of predictive models for Mormon cricket migration. We utilize radiotelemetry, a valuable tool for understanding animal movement patterns, to quantify movements of individual Mormon crickets under natural conditions.

Mormon crickets eat a variety of foods from broad-leaved plants to fungi; invertebrates, including other Mormon crickets, to scavenging on road kills. Some bands lack protein in their diet perhaps because they inhabit areas with fewer invertebrates. When individuals are given a protein-rich diet, they slow their movement and increase the concentration of a blood-borne protein that helps them to fight disease and heal wounds.

Migratory band membership benefits the insects by greatly reducing the probability of being singled out and killed by predators. At the same time, wounded individuals, and perhaps even healthy ones, may be cannibalized by their peers. So we predict that there is an interesting tension with individuals in front running away from those behind and those behind and on the edges trying to stay with the group and avoid being left alone. As a result, the distance and direction traveled by the band is a group dynamic. Research on Mormon cricket migrations was featured on the National Geographic Channel.

This research on Mormon cricket migration was featured on the National Geographic Channel.