To develop knowledge and technology for sound management of water, plants and soil in semiarid regions. 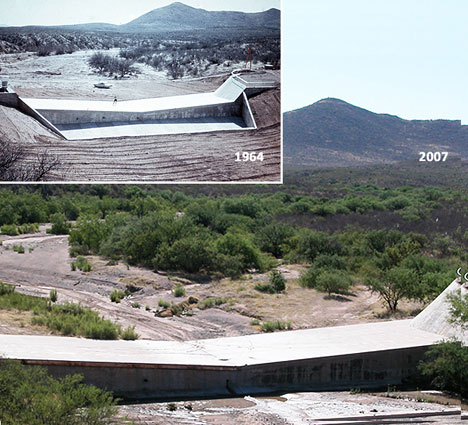 SWRC research ranges from understanding, describing and modeling hydrologic processes to applications of technology at the field level.

Paralleling the shifting and expanding nature of research conducted by SWRC scientists, field research has been geographically extended regionally to rangelands, forests and riparian areas in southeastern Arizona, nationally to other states and internationally to Mexico, China and Kazakhstan.

The overall goal of our research is to improve watershed management through improved understanding of climate and water-driven ecohydrologic and erosion processes. The objectives for this project are:

History of the SWRC

During the 1920s the call for a national response to the nation’s soil erosion crisis was led by Hugh H. Bennett. His early crusades along with his evangelistic zeal led to congressional action in 1929 that established 10 erosion experiment stations (most located in the Midwest). In addition to measurements on small watersheds, extensive experiments were carried out on small plots with portable rainfall simulators [Beutner et al., 1940]. His concerns were catastrophically dramatized during the 1930s as North America experienced disastrous dust storms that had direct, damaging, and long-lasting impacts on U.S. agriculture. Hugh H. Bennett’s continuing efforts undoubtedly had more influence on soil conservation efforts in the United States than any other single person leading to his recognition as the ‘‘father of soil conservation.’’

Prior to the establishment of the Agricultural Research Service (ARS) in 1953 as the primary research arm of the USDA, several agricultural soil and water research programs were established by the Operations and Research Division (ORD) of the USDA Soil Conservation Service (SCS). A series of experimental sites located in Arizona and New Mexico were developed in the 1930s and 40s including instrumented watersheds at the Navajo Experiment Station near Mexican Springs, New Mexico; in Albuquerque and Santa Fe, New Mexico; and near Safford, Arizona. These sites were to provide data in support of natural resource conservation measures specifically involving farmers and ranchers. USDA research at the Navajo Experiment Station [Lowdermilk, 1936] began in 1934 to provide information on precipitation and the role of runoff rates and amounts on the design of soil and water conservation structures such as water spreaders. Water spreaders, or berms, constructed perpendicular to flow along the contour in upland areas, were a useful mechanism for diverting water from small ephemeral concentrated flow paths to provide supplemental water for adjacent grasslands. The research site included soil conservation demonstration projects to educate farmers and ranchers on conservation methods and their impacts on soil, water, and vegetation. In addition, a comparatively dense instrumentation network with rainfall and runoff measurements from nested subwatersheds provided baseline data to couple with erosion measurements. These watersheds located on the Navajo Indian Reservation of northwestern New Mexico were the earliest instrumented (approximately 400 ha) rangeland watersheds in the southwestern United States. The watersheds were operated through the late 1940s. The USDA rangeland watersheds near Albuquerque and Santa Fe, New Mexico, and near Safford, Arizona, were instrumented with rainfall, runoff, and sediment measuring infrastructure in the late 1930s. Infrastructure development at these watersheds was aided by Civilian Conservation Corps personnel, but measurement was hampered by the lack of instruments designed for semiarid hydrologic and geomorphic conditions.

Through the first half of the 20th century, most available rainfall, runoff, and sediment measuring equipment was based on designs for use in the more humid eastern United States. For example, standard broad crested V notch weirs [Holtan et al., 1962; Ruff et al., 1977; Brakensiek et al., 1979; Johnson et al., 1982], were installed in ephemeral channels at the Safford watersheds to quantify flow characteristics which was necessary for interpreting measurements of sediment. During this time period, there were very little data to understand the magnitude of flooding and sediment loads in the semiarid southwestern United States. Sediment loads during infrequent flash flows were much greater than those experienced in typical eastern U.S. perennial flows. As a result, sediment accumulations behind the weirs rendered the flow measurements useless and required significant maintenance.

The need for better equipment, measurement methods, and information from large, complex watersheds led to the formation of the Southwest Watershed Studies Group, which was established in 1951 by the SCS-ORD. This group was charged with identifying and recommending watersheds suitable for long-term hydrologic research on southwestern rangelands. A major research objective for the rangeland watersheds selected for study was to determine if conservation practices would affect water yields, sediment movement and other environmental factors. Among the reasons for these objectives was the concern of water users, such as irrigators, that range conservation programs might deplete the water supplies of downstream users.

The study group consisted of a team of scientists and engineers led by J. Linton Gardner, Joel Fletcher, and Willis Barrett. The group traveled throughout Arizona, New Mexico, and southern Colorado to identify and recommend watersheds suitable for long-term hydrologic research on rangelands. Several criteria were developed for the watershed selection process, primarily focusing on the physical attributes of the watersheds. Specific criteria for watershed selection included size, topography, rainfall amount, and vegetation. The selected watershed should range up to 260 km2 , with coincident subterranean and topographic divides, and secondary tributaries to a main channel that might furnish irrigation water. Watersheds were desired with 250 to 410 mm of annual precipitation. The dominant vegetation desired included range grasses (blue and black grama and their associated species replacing existing shrub/cacti species) with little or no cultivated land. It was also desirable that the vegetation be capable of recovering from a deteriorated condition. In addition, the watersheds selected should not have major water losses to deep percolation and should be in a significant sediment producing area. Furthermore, the watersheds should be accessible during stormy periods and contain sufficient channel bedrock upon which to construct gauging stations. Cooperation with ranchers within the area was also an important consideration because access to experimental equipment over private property was necessary. A total of 39 watersheds were considered, and in 1953 two watersheds were selected, Alamogordo Creek in New Mexico, and Walnut Gulch in Arizona.

In 1953, the SCS-ORD was reorganized and both personnel and research programs were transferred to the newly formed USDA Agricultural Research Service (ARS). Work to instrument these two large, heterogeneous watersheds began in 1953 – 1954 with limited success because of inadequate funding to complete the rain gauge networks and construct adequate runoff measuring stations.

The continuing need for fundamental data, and pressure on natural resources in the face of increasing agricultural, industrial, and population needs, led to a request of the USDA by the Committee on Appropriations of the U.S. Senate to ‘‘make a study of the facility needs for research on soil and water problems’’ [U.S. Senate, 1959, p. VI]. This study was conducted with consideration of variation in physical regions across the US and the urgency of the need for additional research to address problems specific to each region [U.S. Senate, 1959]. Senate document 59 outlined a comprehensive plan of national laboratories to address agricultural problems of nationwide interest, including issues related to natural resources and the environment. This document identified water supply for irrigation and ‘‘the special problems in watershed hydrology because of local flash floods and intense transport of sediment’’ [U.S. Senate, 1959, p. 63] as primary problems in the southwestern United States. The document recommended that the existing Southwest Watershed Studies Group in Tucson, Arizona, ‘‘be provided with the means to become a headquarters for research on the watershed hydrology problems of the Southwest as well as providing for an expansion of range management research’’ [U.S. Senate, 1959, p. 65]. 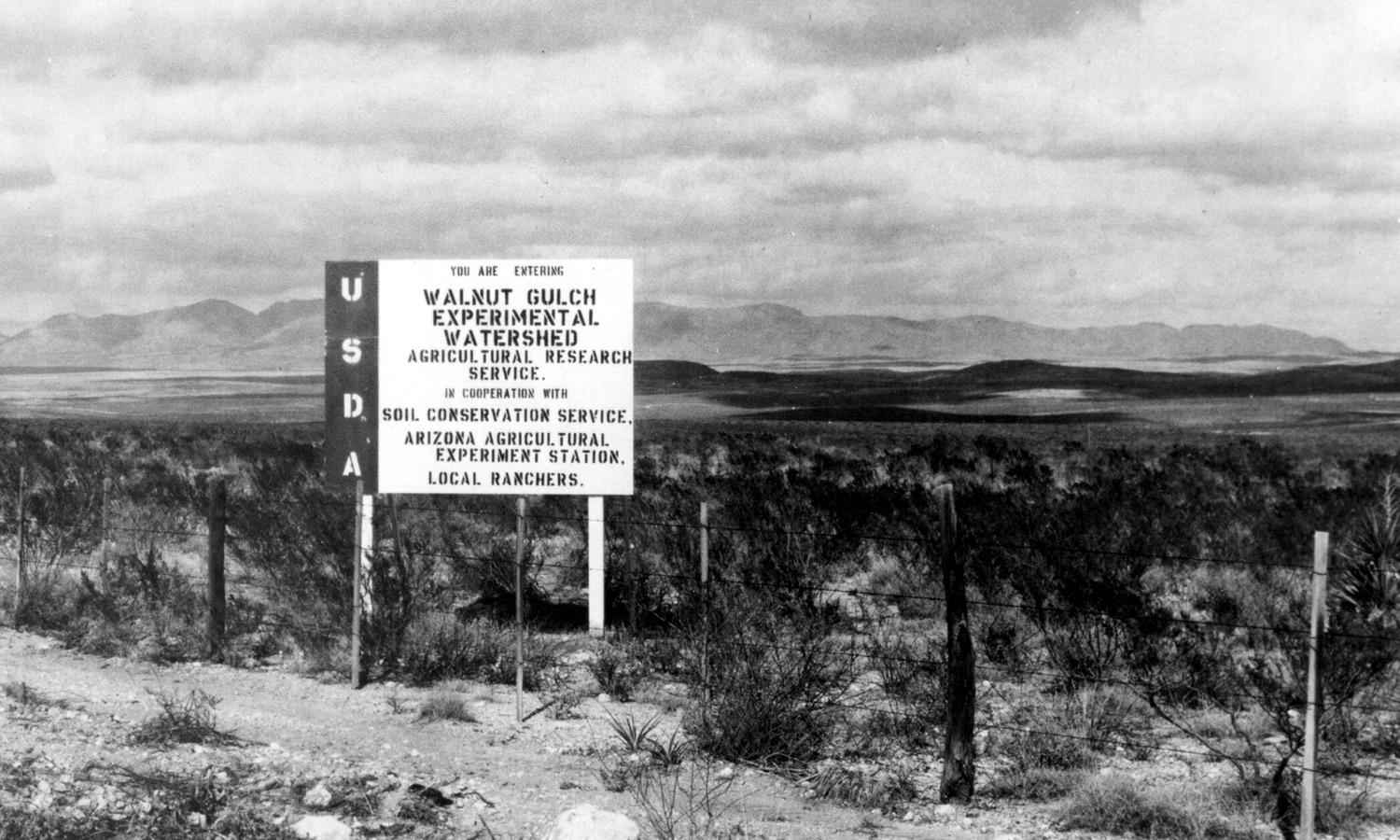