On April 30, 2012 Secretary Hillary Clinton announced the Friendship Blossoms Initiative at a dinner in honor of Japanese Prime Minister Noda.

The Friendship Blossoms Initiative, a public/private partnership between The U.S. Department of State and the U.S. - Japan Bridging Foundation, commemorates the centennial anniversary of Japan's gift in 1912 of 3 ,000 cherry trees as a token of friendship between the two nations. In anticipation of the next 100 years of U.S. - Japan friendship, the United States will offer a gift of 3,000 American dogwood trees to the people of Japan. Trees will be planted in Tokyo, the Tohoku region, which is recovering from the Great East Japan Earthquake of 2011, and in other locations around Japan as an enduring symbol of friendship.

In 1915, in gratitude for the gift of cherry trees, President William Howard Taft sent a gift of dogwood trees to Japan. Because those dogwoods have since died, Ohio Governor Bob Taft took the opportunity to re-enact his grandfather's gesture. In 2000, he gifted 50 dogwood trees to the Diet Building in 1'01.'),0 and Saitama, Ohio's sister state. 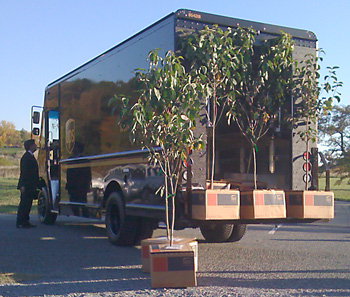 U.S. National Arboretum staff has been an invaluable partner to the Friendship Blossoms Initiative, carefully selecting trees for their durability and beauty from Holly Hill Farms in Maryland and Hawksridge Farms in North Carolina and preparing the trees for shipment to Japan. The 13 9 dogwoods that are being sent off today include Appalachian Snow, Sweetwater Red, Cherokee Chief, Cherokee Brave and Cherokee Princess. Of these trees, 66 Appalachian Snow and 34 Sweetwater Red will be the first to be planted on November 16, 2012 in Tokyo at Yoyogi Park. Additional trees will be planted through 2015. Mr. Toshihiro Hagiwara, tree doctor, of Saitama, Japan, will care for the trees until they are planted. 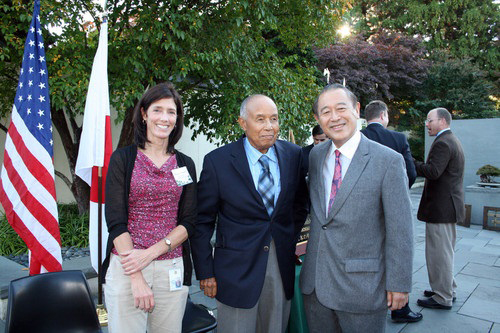 Left to right: Margaret Pooler, Research Leader for the Floral and Nursery Plants Unit; Roland Jefferson, retired USNA botanist who collected, documented, and played a key role in preserving Japanese cherry tree germplasm between the 1940s and 1987; the Honorable Ichiro Fujisaki, Ambassador of Japan to the U.S.