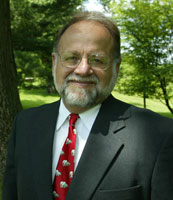 Pedro Sanchez is the Director of the Tropical Agriculture and the Rural Environment Program, Senior Research Scholar, and Director of the Millennium Villages Project at the Earth Institute at Columbia University. He serves as Co-Chair of the Hunger Task Force of the Millennium Project, an advisory body to the United Nations. Sanchez served as Director General of the World Agroforestry Center (ICRAF) headquartered in Nairobi, Kenya from 1991-2001. He is also Professor Emeritus of Soil Science and Forestry at North Carolina State University, and was a visiting professor at the University of California, Berkeley. In April 2006 he was elected a Fellow of the American Association for the Advancement of Science. He was named a MacArthur Foundation Fellow in 2003, and received the World Food Prize in 2002.

A native of Cuba, Sanchez received his BS, MS and PhD degrees from Cornell University, and joined the faculty of North Carolina State University in 1968. His professional career has been dedicated to improving the management of tropical soils through integrated natural resource management approaches to achieve food security and reduce rural poverty while protecting and enhancing the environment. Sanchez has lived in the Philippines (working at the International Rice Research Institute), Peru (working at the National Research Institutes), Colombia (working at the International Center for Tropical Agriculture) and Kenya.

He is the author of "Properties and Management of Soils of the Tropics" (rated among the top 10 best-selling books in soil science worldwide), co-author of "Halving Hunger: It can be done" and author of over 250 scientific publications. He is a Fellow of the American Society of Agronomy, the Soil Science Society of America, and the American Association for the Advancement of Science, and has received the International Soil Science Award, the International Service in Agronomy Award and the Crop Science Society of America Presidential Award.

He serves on the Board of Agriculture and Natural Resources of the National Academy of Sciences and the Board of Directors of Millennium Promise. Sanchez has received honorary Doctor of Science degrees from the Catholic University of Leuven, Belgium, the University of Guelph, Canada and The Ohio State University, USA. He has received decorations from the governments of Colombia and Peru, and was anointed Luo Elder with the name of Odera Akang'o by the Luo community of Western Kenya, in recognition for his assistance in eliminating hunger from many villages in the region.