"Reprogramming the Genome for Animal Production and Cellular De-differentiation 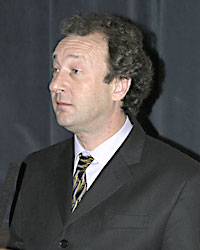 Professor of Animal Development at the University of Nottingham

Dr. Keith Campbell is a cell biologist/embryologist working primarily in the field of cell growth and differentiation.

He attended Queen Elizabeth College London where he obtained a BSc (Hon's) in Microbiology. In 1983 Dr. Campbell was awarded the Marie Curie Research Scholarship, which he used for graduate studies on cell growth and differentiation at the University of Sussex, where he received a D.Phil.

Dr. Campbell joined the Roslin Institute in 1991 where he applied his previous experience to the production of mammalian embryos by nuclear transfer. In 1995 this research led to the birth of 'MEGAN' and 'MORAG', two Welsh Mountain lambs. These were the first mammals to be 'cloned' from cultured differentiated cells (Nature 380:64-66, 1996).

The aims of all of these studies were twofold, firstly to understand the basic mechanisms underlying cellular differentiation and secondly to provide a means for the precise genetic modification of farm animal species.

Dr. Campbell is now Professor of Animal Development at the University of Nottingham. Here he continues to research into the basic mechanisms underlying development and differentiation, uses transgenic animals as models for research and pursues interests in therapeutic stem cells and the cell cycle.